In the lead-up to the Victorian state election, Scott Morrison has demonstrated authority with a firmer policy on immigration, writes Belinda Jones.

ON THE EVE of the Victorian state election, Prime Minister Scott Morrison has indicated he favours a new approach to Australia’s immigration pace and he expects his plan to result in a downturn in immigration.

The plan is to consult with the states to estimate how many immigrants they predict they can accommodate, then immigration rates shall be determined by those numbers. If the Government anticipates a downturn, then common sense would tell Australians to also expect an upturn — after all, this Government has been known to be wrong before.

“The roads are clogged, the buses and trains are full. The schools are taking no more enrolments. I hear what you are saying. I hear you loud and clear.”

Well, whose fault is that?

It is also incongruent to advocate for an $810 million sporting stadium while simultaneously advocating for a 50 per cent cut to immigration due to infrastructure problems, yet NSW Premier Gladys Berejiklian manages to do so.

In the run-up to the 20 October Wentworth by-election, Morrison announced his decision to consider moving the Australia Embassy in Israel to Jerusalem, widely viewed as an attempt to capture the large Jewish vote for Liberal candidate, Dave Sharma. The ramifications of that announcement were still being felt at the ASEAN Summit in PNG earlier this month.

A Parliamentary inquiry after the 16 October Embassy announcement discovered that Morrison had not followed due process and had alerted the media before his many in his Government, DFAT and relevant public servants had been made aware of the impending public announcement.

Hansard documents show Morrison’s decision was largely influenced by Sharma and it was largely his decision with very little consultation with few others. One might call it a “Captain’s Call”. 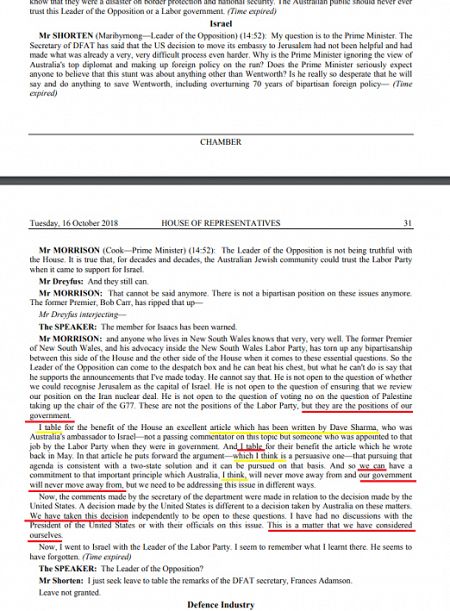 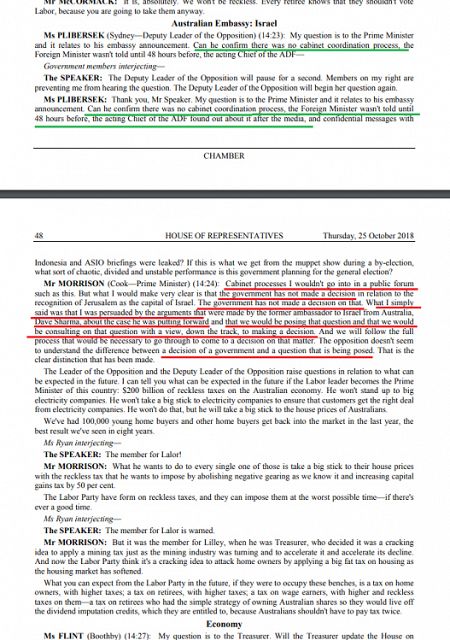 And now, in the lead-up to the Victorian election on 24 November, Morrison discusses the proposal in terms of “himself”, rather than “his Government”, once again. Should we take this as a captain’s call too? It’s becoming impossible to know whether to take Morrison seriously or not — he vacillates between buffoonery, hostage videos, sporting events and captain’s calls to serious politician and back again with warp speed.

“My approach will be to move away from top-down discussions about population to set our migration intake caps. I anticipate that this will lead to a reduction in our current migration settings.”

Morrison said he had been “listening” and has based his decision on that. An absence of facts and evidence of consultation once again — just his opinion. He may well be right but it shows a consistent abandonment of consultation with his Government, due process, political discretion and appropriate timing. There is a certain arrogance in Morrison’s manner and a lack of respect for colleagues, it would appear that his leadership style is that he’s the boss and his word on the matter should be enough. Clearly, he thinks he’s the smartest guy in the room despite a questionable track record and being wrong on other issues — for example, Morrison once called the need for a banking Royal Commission a “populist whinge”.

The other consistency that is evident is that his captain calls are ideologically aligned with the shrillest voices from the far-Right. So, twice now, Morrison has made captain calls to appeal to the far-Right just prior to an election. The first time, it backfired spectacularly by failing to win the by-election and upsetting our closest neighbours. It begs the question: why do it again? A position that is at odds with polls that suggest the Government may be bleeding to the Right, but it is hemorrhaging votes to the Left.

Morrison did not outline details of his plan on Monday night or how the Federal Government would respond if the results did not have the downturn he expects. He spoke of no timeframe, or funding, or initiatives.

The Prime Minister identified Sydney as one of the infrastructure problem areas, but failed to acknowledge the mismanagement of both the NSW State Government and the Federal Government in failing to manage infrastructure in response to population growth and the immigration they themselves have approved.

The day after announcing his plan that he expects will lead to cuts in immigration, Morrison tweeted a message about Sisto Malaspina, an iconic Italian immigrant, one of the many immigrants who helped build modern Australia.

At Cabinet today we paused to remember Sisto. I was pleased that Jen was able to attend with my Assistant Minister @SteveIronsMP. We’ll miss you, Sisto. Your memory will always remind us of why we value life, love and freedom so much.https://t.co/Z8jufSff3N

Prime Minister Scott Morrison of Australia has proposed that the government impose stricter limits on immigration to control overcrowding in the country’s major cities https://t.co/ldrmqfNMP8