NSW Opposition Whip Noreen Hay resigns from her factional position as allegations over her connections to a Chinese company emerge. Peter Wicks from Wixxyleaks reports.

As many of you would be aware, IA has been following the actions of the NSW Member for Wollongong, Noreen Hay’s actions over the last few months.

On Tuesday night, there was a significant event: Noreen Hay stepped down from her position as convener of NSW Labor's Centre Unity faction.

Since then, there has been the usual argy-bargy and phone calls going on to secure support for whoever will fill Noreen's shoes. (Do they really want someone in Noreen's shoes? I mean, those shoes of Noreen's are smelling more and more like she has stepped in something.)

Clearly, there are some major issues to be addressed at the moment within the Party and the faction. These issues are having a major impact on NSW Labor’s ability to move forward from the public perception of corruption and the old guard protecting each other. The two names associated with these issues are Noreen Hay and state secretary Jamie Clements.

Those who wished for things to continue as they are, with the Party’s reputation being dragged through the mud, will have been happy to back the candidate being pushed by Noreen and Jamie — Legislative Council MP Courtney Houssos. By supporting Houssos at the factional meeting that has just held today, Noreen would keep her fingers on the strings.

In my humble opinion that, in times of unrest, confusion, and where there is a dark cloud hanging over the party, it would have been wise to turn to a trusted and well-respected member in order to boost confidence. In my opinion, that person was Michael Daley. Unfortunately, Daley did not stand for the position and so Houssos was elected unopposed. Noreen may have stepped down, but her influence remains.

Noreen has stated that her reason for stepping down is that the position is a conflict of interest with her position of Opposition Whip — a position for which Jamie Clements backed her.

Noreen Hay has held her position as Opposition Whip for a while, yet it would seem she has only just discovered a conflict of interest. This is rather odd.

So, why else would Noreen consider stepping down? What else has occurred lately that may have brought this decision on?

On 26 May, Liberal Party Whip Dr Peter Phelps addressed the parliament and spoke of some allegations regarding Noreen and Shinyway Education Group, a company that allegedly accepts forged school transcripts from overseas students to lobby for university positions. 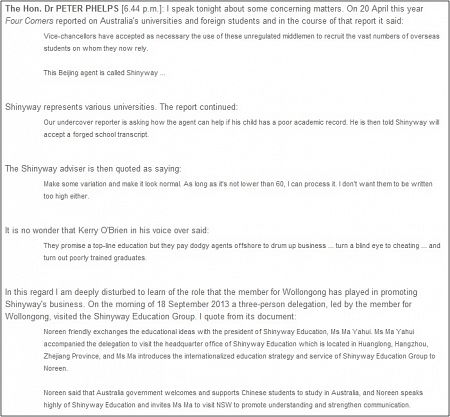 This has been referred to by some as Noreen’s China Syndrome.

Noreen’s response to Dr Phelps was a brief statement, where she promised to be able to provide documentation — something I understand has yet to be provided to the parliament.

Noreen's relationship with Shinyway goes back at least as far as 2013, when she was part of a delegation of three that travelled to China on 18 September 2013. Then on 24 October, she was the guest of honor at a Shinyway launch in Sydney.

The trip in September was so important that Noreen took her then staffer Kiley Martin, who was charged with a high range drink driving offence earlier this year. Questions remain as to who paid Ms Martin's travel expenses.

If the delegation was travelling on official business where is the report on the trip's outcomes? If it was as many suspect either a junket or a private matter for Noreen why the need to take a member of staff that has publicly funded wages

Questions also regarding who the mystery third delegation member was remain given Noreen’s response failed to address this question. Some have suggested that the third delegate may have been Randy Lu who was appointed as a business advisor to Illawarra Regional Development Board in 2005.

The board also had as members two local councilors that were found corrupt by ICAC during the Wollongong Council corruption scandal in 2008. Another former board member about whom there are persistent questions being raised about whether or not she was involved in the trip is Michele Greig, a former Shellharbour deputy mayor, Noreen shadow and factional ally, and an alleged frequent traveller to China.

However, there is speculation that Noreen Hay's relationship with Shinyway has been going on for longer than that.

Questions are being asked relating to a previous scandal involving Noreen's associates in 2008, relating to prospective Chinese students paying $80 to sit a test as a scouting exercise for Wollongong University and how this scandal may have involved Shinyway, Randy Lu, the Regional Development Board and Noreen Hay.

Randy Lu was in Australia recently, I wonder if Noreen caught up with him while he was here.

While Noreen Hay tries to pass all of this off as smear, to many of us it smells more like smoke and, as we all know, where there is smoke there is usually fire.

Something tells me this story has a long way to run yet.