The Morrison Government's inability to address sexual violence against women is further evinced by its profound inability to create even a simple educational video about sexual consent for teens, writes managing editor Michelle Pini.

IT IS SIMPLY inexplicable that one government can manage to get so many things so completely wrong.

From the failed NBN and energy policy, to sports rorts and sexual abuse, to violence against women, the list of failures emanating from this Coalition Government is unparalleled.

The latest bizarre “initiative” has already been canned, just hours after the government could be heard promoting it.

Two videos, ostensibly about sexual consent, produced as part of the Morrison Government’s “educational” The Good Society website, have been removed, following community and stakeholder backlash.

One of the now-deleted videos, aimed at year 10-12 students, depicted a female perpetrator – despite government research indicating males make up 97 per cent of sexual assault offenders – smearing her milkshake (not a euphemism for her breasts but an actual milkshake) over her male friend’s face, without asking permission.

'It’s sexual assault — use the language.'

In the second cringeworthy example, a speargun-toting male attempts to coerce his shark-fearing female companion to go swimming.

Though most people, young and old, would have likely felt their stomachs turn well ahead of other featured food groups, yet another video used tacos as symbols for sexual objectification — a baffling concept, perhaps even for Freud.

Put simply, these videos are as off as the milk used in the original footage would now surely be.

Aside from the fact that their infantile tone is suggestive of piss takes, using inane metaphors to avoid mentioning sex to young adults – let alone rape or assault, which is what they are meant to be about – is simply a mind-boggling regression to Victorian times.

Today, however, these examples not only completely miss the mark, they are insulting to people of all age groups and trivialise the lasting trauma felt by victims of sexual abuse.

IA asked one young person, to whom the videos were targeted, to share his thoughts on the "milkshake" video:

It was pretty patronising; it was like a Play School episode about sex. I think if they’d actually shown real-life sex it would’ve probably been less disturbing than that strange cream smudging situation.

They tried to make it easy for us to understand with graphics about "moving the line" but really, this all made it more confusing. Like when characters said things like, “I’m really angry at you right now”, you’d just wonder who actually talks like that?

And why have the characters talked about all these other things so blatantly but used metaphors to describe sex and rape? And with "moving the line" there’s this talk about a “maybe” zone. Surely if it's rape you’re referencing, the “maybe” zone is out of the question?

When the video starts, you think they’re just being ironic, but by the end of it, you’re left wondering what the hell you just watched.

The videos – which will possibly now only appear in satirical skits – also seem less than funny when you consider their approximate $3.7 million price tag. Like most arrangements made by this Coalition Government, the exact cost of the videos, or the website on which they were featured, is hard to determine. But if the $3.7 million estimate is close to the mark, this accounts for more than half the total budget originally allocated to the Morrison Government’s “Respect Matters” sexual educational program.

Thanks for sticking with it - something really fishy about all this

Liquid Interactive has had over $20 million in funding from the federal Govt - including a recent $22K 'Growth Grant'(??) to a subsidiary called iLIQUID PTY LTD - Key principal is Michael Burke

The media items are presented on The Good Society website, which, along with the so-called consent videos, is the handiwork of Liquid Interactive. A short and excruciating browse of The Good Society creation, reveals little as to its purpose. It is a maze of confusing messages presented in patronising language and as far from a user-friendly teaching resource as food items are from sexual abuse.

Interestingly, Liquid Interactive seems to be the digital agency du jour for the Coalition Government, with current successful tenders totalling tens of millions of dollars.

The Respect Matters program was first established by former PM Malcolm Turnbull as a component of the 2015 Women’s Safety Package. And The Good Society website was launched last week as part of that initiative by Education Minister Alan Tudge to assist teachers with resources for use in the classroom. Tudge claimed it had been "designed to complement programs already being offered by states and territories".

Sexual assault activist Chanel Contos had this to say about the "milkshake" video:

...That video is belittling to Australian youth and was clearly not expert informed.'

This is a view supported by at least two of the actual experts and stakeholders, Our Watch and Foundation for Young Australians (FYA), who were initially consulted but who have since distanced themselves from the project.

FYA said it had introduced to the government a young person in its network who “may have taken part in a confidential reference group process in 2017”, but it had not been asked to “review, use or endorse the materials subsequently”.

Our Watch similarly indicated it had been consulted between 2017 and early 2019 but:

‘We have not been asked to use or endorse the materials subsequently.’

Contos also referred to the video featuring tacos (which survived initial deletion before also being removed), which stated, “intense sexual desires" are what lead to sexual assault.

Finally, this Federal Government certainly seems to have a problem with sex in general. If it’s not rapes occurring in Parliament House, sexual harassment by ministers or staffers pleasuring themselves all over the office, it’s an inability to address the very real problems of sexual violence against women. And this is further evinced by a profound inability to create even a simple educational resource for teens.

As Contos points out:

' [Over] fifty per cent of year 10-12 students in Australia are already sexually active. They can handle talking about sex without euphemisms, and they need to talk about consent and sexual assault frankly, using real words and real examples.'

It’s a shame our Federal Government cannot use real words to call a rape a rape.

EDITOR'S NOTE:
This article originally featured an image of the Sewell Corporation team, incorrectly captioned as Liquid Interactive.
We apologise for any confusion. 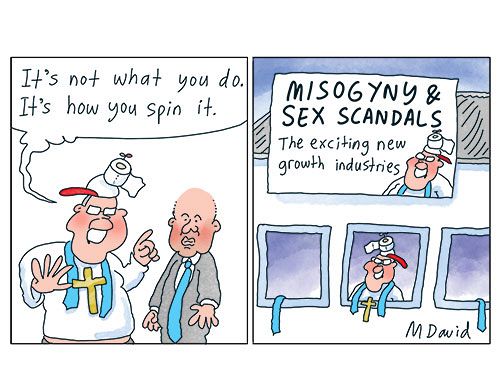