Another shocking first-hand account of the appalling conditions in offshore detention, this time on Nauru. Sarah Smith reports.

MARIE* AND I have a lot in common.

We are both incurable bookworms who enjoy biographies and autobiographies. We both love music and craft; our most recent conversation was about Japanese embroidery.

We are both mothers, who have fought our government so that our children can have a better future.

Actually, the main difference between Marie and I is that she's a qualified accountant (I still count on my fingers) and that, after ten years of practice, she's close to being qualified as a yoga teacher (I trip over my own feet regularly).

The other difference, which seems to me to be of lesser significance, is that I was born in Australia.

This is her story.

Marie was politically active in her own country, because her government was so oppressive; her children (especially her daughter) had no hope of a good future. She worked tirelessly for change, so that when her children grew up, they didn't have to.

This I understand; when my daughter is my age, I'd like her to be able to enjoy her family, not fight for her basic human rights and those of her friends.

Marie's intelligence, compassion and drive to create positive change eventually earned her the attention of her government — a government who tortures and executes any and all who oppose the regime.

Marie and her husband had two choices: stay, and face torture and execution, leaving their children without parents and with no prospects for employment or education, or to flee with their children to another country. She did what I, or any mother, would do — she took her children and ran for her life.

The path to Australia does not, as many seem to believe, involve moving through "several safe countries". The journey here from Marie's home country is perilous and at every turn she risked her safety.

In 2014, Marie and her family got on a boat to Christmas Island.

We haven't spoken about the boat journey, actually, because I know enough people who came here by boat to know that the stories are so harrowing and so similar that talking with Marie about it would be unnecessary and upsetting for us both.

Each boat journey is potentially life-threatening — this is the single thing that the Department of Immigration and Border Protection and I agree on.

The boats are small and in terrible condition. Overcrowding is the norm. More than one boat boarded by friends of mine has been captained by an underage teenage boy.

The seas are big, there are frequently storms and, in the time it takes to reach Christmas Island, they've been surrounded by sharks, whales and everything in between. There are often engine fires, leaks and subsequent flooding, illness and there is never any sanitation. They have only a few days worth of food and water; if the engine catches fire and they end up floating adrift, they will be left starving and dehydrated until they are found.

Before the Australian Border Force (ABF) was formed on 1 July 2015, these boats were met by the Australian Navy. Those stories are heartwarming — naval officers offering anything and everything these hungry, thirsty and terrified passengers needed. The Navy treated these vulnerable people with kindness, providing medical care, compassion and something entirely new to them — a sense of safety.

Now, boat arrivals are met by the ABF. Passengers, sick, exhausted, often hungry and dehydrated, and covered in their own body fluids and faecal matter, are immediately interviewed. They are not offered a chance to rest, or to clean themselves up. Each person interviewed is treated as a potential terrorist and the interview is conducted accordingly. The trauma of the boat journey is compounded exponentially by this harsh treatment, which on occasions has culminated in the boat being towed back out to sea and, in at least one instance that we know of, the captain of the boat being paid to return to Indonesia.

The boat Marie and her husband and children arrived on, fortunately, was met by the Navy. The passengers comprised a diverse group of men, women and children.

And that's where things become confusing.

Some of the people on the boat have been settled in Australia.

Some of them are in detention onshore.

And others – like Marie and her family – were sent to Nauru.

Marie and I have been friends for over a year now. We have become each other's sisters, our children each other's cousins.

In the time I have known this intelligent, brave, resourceful and downright brilliant woman, she and her husband and children have been through the most harrowing experiences on Nauru.

Marie has been systematically victimised. Her children have been beaten by Australian security guards. I can't give the details of this because it would risk identifying her and put them in danger of reprisals. But I can assure you that, had this happened in Australia, the guards would have faced serious criminal charges.

Marie's daughter has attempted suicide twice; she and her younger brother are severely depressed. They cannot attend school, there are no work prospects for them — now, or in the future. They are facing living – and dying – on an island made from bird excrement, in a society where the rule of law is not upheld. They live in a camp of mouldy tents where the guards govern in a terrifying manner reminiscent of Lord of the Flies — free from repercussions and drunk on their own power. 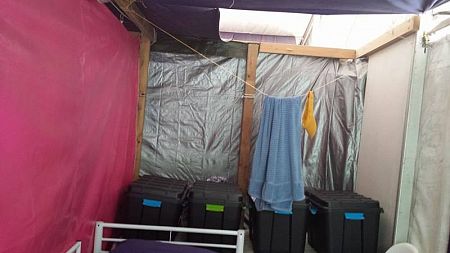 The tent in which Marie, her husband and her children have lived for the past three years. (Photo supplied)

I like to think about what Marie's life would be like if she and her family had been settled in Australia with some of their boat mates, instead of being sent to Nauru.

I imagine us going to the library together; there is a beautiful library I've taken to frequenting in Sydney that stocks books that are entirely in her native dialect.

I imagine our children playing together and conspiring to get us to take them to the movies, or out for ice-cream.

I imagine helping her son and daughter with their homework and her daughter teaching me the distinctive style of makeup women in her culture have adopted.

These things are impossible according to the Department of Immigration and Border Protection, yet what Marie and her children are suffering, the life they are living, is something that I never could have imagined would occur in my lifetime.

Suffering on this level should be the impossible option.

The life I imagine for them should be the life that we have now. I'm not asking for miracles. I'm not even asking for favours.

Refugees on Manus and Nauru told us "We just want to live our life, not kill us slowly in detention" https://t.co/ZB3E2EXdVa

What I want to know is, why are Marie, her husband and their children on Nauru?

It can't be to save lives. Had she not come to Australia, she would have been executed — as is the case with many people interned in the camps on Manus and Nauru.

And I am writing this because her daughter is again in danger of ending her life. This beautiful girl can't take any more.

The reality is we should not expect her to.

I wouldn't ask my own daughter to endure a life of indefinite beatings, appalling living conditions and the sexual assaults which are common on Nauru to the point of inevitability.

Nauru is not saving lives. Nauru isn't keeping our borders safe. Nauru is causing deaths on land and, as one of my friends there pointed out to me, there are worse things than death.

And one of those things is the Australian-taxpayer-funded Nauru Regional Processing Centre.

*Marie is not her real name

Speaking up for asylum seekers on Nauru — but only when spoken to https://t.co/SxvjdqS4ru @IndependentAus