Murdoch and the Coalition: This week targetting renewables

The Murdoch media and the Coalition are ramping up the war on renewables in the wake of soaring gas prices, writes Giles Parkinson.

THE MURDOCH MEDIA and conservative Coalition parties have ramped up their attacks on renewable energy in light of the big spike in electricity prices in South Australia this week, saying that wind and solar are solely to blame for the state’s electricity problems.

Power prices spiked sharply again this week but energy analysts say that wind and solar are not at fault, pointing out that gas prices have jumped to record highs and the interconnector to Victoria was constrained due to delayed work on network upgrades.

But this has cut no mustard with the Murdoch media and the Coalition, who have used the incidents of the past week to renew their usually skewed attacks against the high levels of wind and solar in the state.

'SA’s reliance on wind and solar power is responsible for these absurd prices.'

'The state’s electricity supply cannot be left at the mercy of the weather gods and erratic spot prices. Labor’s great green energy experiment will cost it ultimate power in 2018.' 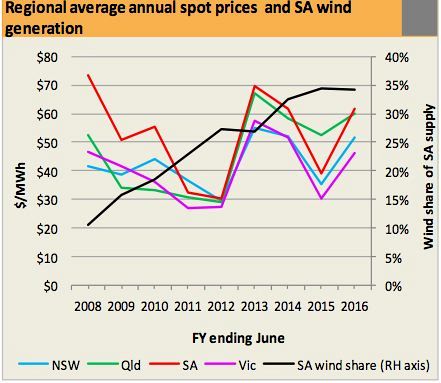 The editorial makes absolutely no mention of the record gas prices, or the energy cartel that it is defending.

Murdoch’s position has been eagerly supported by the local state opposition, which like all Coalition parties across the country – at both the state and federal level – is pushing back against any moves to increase the amount of renewable energy in the electricity system.

“The (South Australian) government’s complete and utter obsession with renewable energy has left us in a very vulnerable state without a workable energy strategy.”

Marshall also failed to mention the cost of gas.

“I mean continuity of energy supply is absolutely critical, and what we’ve done is we’ve driven out base load power in South Australia because of this obsession that the Labor government has had with renewable energy and we haven’t been able to put that certainty, that continuity into the equation.”

Actually, the state’s largest base load generator, Pelican Point, a 485MW gas-fired plant, has not been operating because gas prices are too high and it cannot make any money out of it — although it did agree to a government request to restart for a short period while the interconnector was repaired.

A similar situation exists in Queensland, where the Swanbank E gas-fired generator – like Pelican Point, one of the most efficient in the country – has also been mothballed because of soaring gas prices. Queensland, it should be noted, has virtually no large-scale wind or solar.

As RenewEconomy has pointed out on numerous occasions in the past week, the huge spikes in electricity prices are a direct result of increased gas prices, which have hit record highs across the country and in South Australia have been more than twice the price of other states, on occasions.

This is blamed on increased demand from the current cold snap, the need to supply the big liquefied natural gas (LNG) export terminals and unexplained blockages in supply elsewhere in the network.

For more information on how the gas cartel works in a market with virtually no transparency, see this excellent report on MichaelWest.com.au, or this story, 'How the gas market is holding the country to ransom'.

Indeed, even if there was little renewable energy in the system, South Australia would still be experiencing high electricity prices because it would still be reliant on gas — as it experienced for more than a decade before wind and solar was built into the system.

South Australia has always had higher electricity prices than the rest of the market, due to its historic (and pre-renewable) reliance on gas and one of the reasons it has sought to increase renewables is to try to reduce its exposure to the volatile price of commodity-based fossil fuel generation.

The Clean Energy Council this week reinforced the point that the high prices in South Australia have been caused by the high gas prices, the cold snap and the network interruptions.

Because renewable energy effectively has no fuel cost, it helps to keep power prices lower during periods of high wind and sunshine. Wind power provided a large part of South Australia’s power over the weekend and early this week, but with the price of gas so high, wholesale prices have jumped.

The ACT appears to have successfully hedged against the volatile nature of fossil fuel prices by using renewables and targeting 100 per cent of its supply from wind and solar by 2020. It may, in fact, make windfall gains from its cleverly calibrated investment.

But the past week has seen an extraordinary sequence of events, starting with high gas prices, unusual bidding patterns, the loss of capacity on the interconnector, the continued sidelining of two of the most efficient gas plants in the country and, as if on cue, the announcement of a review by the Australian Energy Market Commission of “system security” in the country.

Many suspect this review will be used by fossil fuel generators for new subsidies known as “capacity payments”, or at least for a new “inertia” market, increasing the revenue that can be sourced by their gas generators. AGL Energy filed an application for a rule change on these inertia markets in late June.

At the same time, these very same companies are arguing against rule changes that could encourage cleaner, faster and cheaper alternatives, such as battery storage, to provide the same services.

That’s one of the big questions for regulators in Australia and around the world: the National Electricity Market rules clearly need changing, as the South Australian Government has pointed out.

But will these rules be changed to reinforce the power of the energy incumbents, or will they be changed to facilitate and accelerate the inevitable and much-needed energy transition?

As a new study released through Cambridge University this week highlights that the obsession, until now, has been with keeping business as usual:

'Business-as-usual carries on with incremental decisions, made in narrow frames of reference, that continue to build, and lock investments into the conventional fossil fuel infrastructure.'

The major issue, it notes, is profiteering in the wholesale markets. In Australia, various studies have suggested that at different times, the big fossil fuel generators have gamed the market to the extent that more than $400 million was added to prices in Queensland alone in two separate examples in 2015.

Market operators suspect the same thing is happening now, despite the introduction of bidding in “good faith” rules that were introduced two weeks ago.

As one energy market participant said:

“It was as though everyone decided to bid higher at the same time.”

This is not just an Australian phenomenon. Last year, according to the Cambridge study, the U.S. General Accounting Office noted that excessive profiteering in the regional markets had led to unfair electricity prices. It said consumers may have paid an excess $US12 billion in 2011 to generating companies that do not face genuine market competition.

The problem is not wind and solar, it is the absolute power of the incumbents and their high fossil fuel prices. That’s the true cost of a restricted market, where the regulators have been too slow to act.

This article was originally published in RenewEconomy on 15 July 2016 under the title 'Murdoch, Coalition go in guns blazing against wind and solar' and has been republished with permission. You can follow Giles on Twitter@GilesParkinson.