As much as the Morrison Government struggles towards recovery from the COVID-19 pandemic, the long-term outlook seems grim, writes Mungo MacCallum.

WE WOULD NEVER DREAM of accusing Prime Minister Scott Morrison of being relieved by the onset of the second wave of COVID-19, but nonetheless it has postponed a nagging problem for him.

It has been clear for weeks that the stimulus measures implemented by the Government could not simply be shut off. This was the original idea, but circumstances – and mainly pressure from just about all the stakeholders – made it impossible.

However, the manner and extent of the maintenance of JobKeeper and JobSeeker, in particular, has developed into a brawl over all fronts: economic, medical and political. And as Treasurer Josh Frydenberg faced his self-imposed deadline last week, the prospects were not propitious.

But then COVID-19 came galloping back, rampant in Victoria and then crossing the Murray into New South Wales. And there were ominous signs of resurgence in the other states and territories. So extending and rejigging the handouts became a no-brainer. 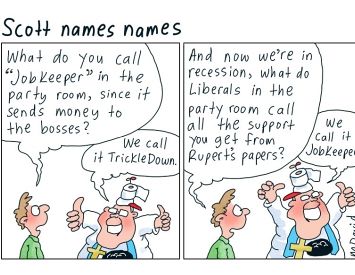 Kicking the can down the street, maybe? Sooner or later a real decision will have to be made, but the later the better — there will be plenty of time to prepare the voters for the inevitable and it is more than likely that there will be other distractions to divert their attention when it happens. And for the moment, the money will keep flowing.

Once again, the spin doctors revised the original schedule. The idea was to make it all part of an economic update – but not, Frydenberg insisted, a mini-Budget – on Thursday. But given the numbers on debt, deficit, unemployment and general misery were not promising, it was broken into the good news – to be delivered by Morrison on Tuesday and assiduously leaked to the morning papers before then – and the bad news, the grim statistics were left for Frydenberg on Thursday; a traditional day of mourning.

Actually, some were not as grim as we had feared from Frydenberg’s diligent softening-up process. Last financial year’s deficit may indeed look eye-watering, but it is not unprecedented — we only go back 70 years, a mere biblical lifetime. But then, next year’s deficit is predicted to more than double, so the records will keep tumbling.

Debt will also continue to soar. However, given that it was soaring anyway over the first seven years of the Coalition, we can regard that as business as usual. And just about all the economic indicators are on the downward slope — no surprises there.

But the crusher – the figure that drops the “cess” into “recession” – is unemployment. And that’s where the real uncertainty is festering. The headline figure is Treasury’s estimate of 9.25 per cent in the December quarter, but even the most credulous of the Pollyannas know that it is really much higher than that. The realists are saying 15 per cent out of work and that, crucially, it will get worse – much worse – before it gets better. 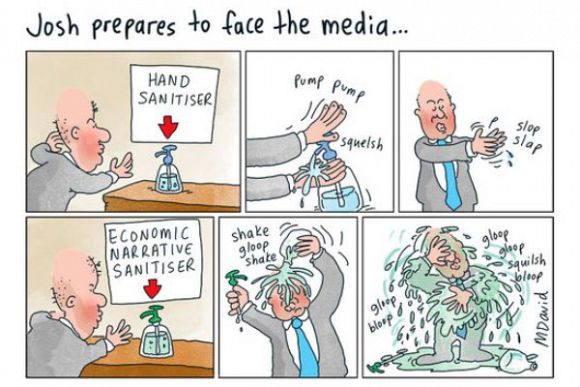 As JobKeeper tapers off and becomes harder to access, the numbers will rise to well over one million jobless next year and the prediction of zero net wage growth will not help. The more pedantic economists are already saying that this is not a recession — it is full-on depression and they don’t just mean the mental angst of isolation and social distancing.

And even the ever sanguine ScoMo was stretching for ebullience in the manner of a drowning man grasping at straws. JobKeeker will be maintained for at least eight months, which should keep employers if not actually happy, at least placated. But it will need to be reassessed and the rates will taper off over time. Any serious hope that it will trigger an investment boom is clearly fanciful.

And there is an expectation that a large majority of the nearly five million workers currently on the list will be removed from it. But unfortunately, that does not mean that they will all be back in productive jobs. We don’t know how many companies will close, but the likelihood is quite a few — bankruptcies, which had stalled, will resume with renewed momentum.

As a result, a lot of the employees propped up by JobKeeper will lose their jobs altogether and move seamlessly over to JobSeeker — and the unemployment queue. And although JobSeeker will be above the abject poverty line of Newstart, it will still mean a large step down, not only in actual income but in self-belief — the confidence that is essential to power any putative recovery.

JobSeeker, at the propped up rate, is scheduled to close with the calendar year and although Morrison says he is leaning towards some kind of replacement, it is unlikely to be a cause for celebration. The current regime will end as soon as the Christmas decorations have been repacked and even before then, the times will be tougher.

The gratuitous cruelty of mutual obligation, forcing victims to spend their meagre dole payments chasing non-existent job vacancies, is to be inflicted anew. If there is to be welfare, there must also be punishment — well, for the poor and the powerless. Morrison and his fellow politicians will happily absent themselves from their own well-paid jobs — attending Parliament is too risky, too difficult. But of course, we are all in this together.

So where will it all end? Obviously, none of us knows and, somewhat alarmingly, there are signs that the Government is preparing to acknowledge this and simply give up the battle. The talk last week was all about learning to live with the pandemic – even with a vaccine – the virus cannot be eliminated, outbreaks will recur.

And that being the case, we might as well stop struggling and resume the faltering economic model we were muddling through a year ago. Morrison is having one more go at prevarication. But after JobKeeper officially shuts down in March, it may be simpler to go straight to capitulation.

And even if COVID-19 can be brought under control, it is a safe bet that in the near future another virus will emerge, another infection will invade our sea-girt borders and the whole process will start again… or perhaps not; maybe next time we will cut straight to the chase and save the money.

We could go back to traditional Coalition values: looking after mates, bashing unions, states and media, fantasising about delivering a budget surplus. Now that would really be back to normal.