Scott Morrison, most notorious of all Australia's prime ministers for his delusions of grandeur, offered up a sermon on the “politics of retribution” in answer to a parliamentary censure motion.

The historic censure motion was moved by Leader of the House Tony Burke against the former PM for secretly appointing himself to five ministries without informing "the Cabinet, the relevant departments, the House of Representatives or the Australian public”.

While Morrison's preacher-style response with claims of "intimidation" and "retribution" was, of course, bizarre, it also seems somehow fitting from a man who needed to organise empathy classes for his entire cabinet.

A man who ditched us all to go on an overseas pleasure trip while Australia was burning down.

It was Scott Morrison who coldly turned his back on persecuted refugees as he engineered their torture under the guise of "border protection" and then bragged about it.

And it was Morrison who, enabled by his carefully chosen front bench and cultivated accompanying media cabal, pursued society’s most vulnerable for debts they did not owe under the malicious Robodebt scheme, even after he was fully aware of its illegality.

While his own party members and parliamentary “friends” jostled each other to distance themselves from him in the lead-up to the censure motion, Morrison embraced the berating, belligerent, self-righteous persona to which we have (unfortunately) become accustomed.

Yesterday morning (30 November), the man whose secret ministries threatened our democracy and all but decimated his own party rose to defend the motion in the House of Representatives.

There was no evidence of remorse. There was no unqualified apology. Not even a slight tremor in his voice.

Morrison actually even said he was proud of his decisions, including the one where he chose to sidestep established democratic conventions as he secretly appointed himself chief cook and bottle-washer of any portfolio he felt like appropriating, as the mood took him. 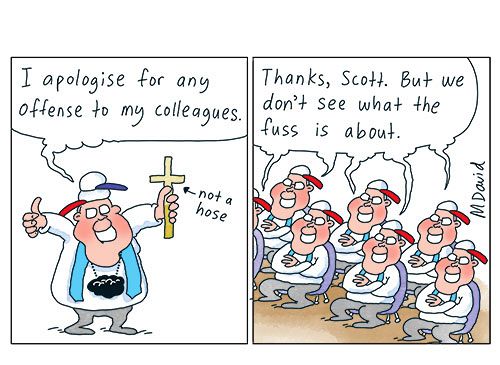 Scotty also said he would not say sorry for “saving Australians’ lives” — no evidence of a god complex there, then.

In Scotty’s fantasy world, we were all "on the shore", remember, as he "steered the ship through the storm"?

Basically, his long-winded speech can be summed up thus: I did you all a favour… blah blah… COVID… blah blah blah... unprecedented times… blah blah…, Labor's fault... shout out to my Pentecostal mates... blah blah... sorry, not sorry... I’m proud of my secretive and maniacal behaviour, so censure away.

Meanwhile, in the real world, former High Court Justice Virginia Bell’s findings from the inquiry into Scott Morrison's self-appointment to secret ministries offered little of which one could be proud and concluded with the following:

‘…The lack of disclosure of the appointments to the public was apt to undermine public confidence in government… [and] the secrecy with which they had been surrounded was corrosive of trust in government."

The former PM did not offer any answers to the obvious questions as to why he undermined our principles of governance or why he kept it all secret, even from his own Cabinet, but shared it with a couple of media buddies. Media buddies who delighted in the secrecy, choosing to save it until after the Federal Election, for the most lucrative moment — democracy be buggered.

All of this is also unsurprising, of course, since there can be no justifiable reasons for such abnormal behaviour. Or, indeed, for the sycophantic establishment media's treatment of this man and his party.

Scotty's performance resembled that of a leader addressing the party faithful at a Liberal Party election campaign launch, rather than a disgraced former prime minister facing a humiliating disciplinary motion in parliament for undermining the principles of our democracy.

And in keeping with this self-congratulatory mood, Morrison’s Coalition colleagues did not make a move to censure him internally, which may have restored some public confidence in the party, at least. They (mainly) voted against the motion, of course.

Indeed, after the abomination of a speech to which we were subjected, most of the Opposition actually formed an orderly queue, eager to shake Scotty's hand, excited for the pat on the head as reward for their loyalty.

Only one brave Liberal woman, Member for Bass Bridget Archer, broke ranks to speak out, labelling Morrison's actions “an affront to democracy”.

And Scotty saved the best bit for last (IA emphasis):

'I conclude, Mr Speaker, by thanking the Australian people for the privilege of being able to serve my country in so many roles, but especially, Mr Speaker, as prime minister.

His apparently unironic finish notwithstanding, the motion to censure Morrison passed 86-50 after a vote in the House.

While this all basically amounts to a slap across the wrist, it is an important symbolic gesture. A public, formal censure that should remind us all why this man and his (largely) sorry group of Liberal Party cohorts – who have failed, once again, to condemn Morrison's deplorable actions, effectively condoning them – are not fit to be in opposition, let alone to govern.