When it comes to the pandemic, Morrison is caught between the voters' and the donors' competing demands and is balancing them by… well, doing nothing, writes Andrew P Street.

The pathway out of COVID-19, at least in theory, is a pretty straightforward one.

We are a country which relies heavily on tourism and immigration, especially our badly-listing tourism and education sectors, and our primary industries have become dependent on having a cheap visa-motivated workforce to exploi… sorry, to do the work which Australians seem reticent to take on, demanding unreasonable luxuries like “shelter” and “wages” and “not being sexually assaulted by employers”. Job snobs, huh?

So, clearly, we need to open our international borders to people other than cricketers and our more reckless Olympians (and former ministers lobbying for a cushy post-politics job at the taxpayer’s expense).

And that requires two things.

One is dedicated quarantine centres where travellers can be accommodated as the need arises, since the ad-hoc whack-‘em-in-hotels solution has proved ineffective. And the other is population-wide vaccination against COVID-19 so that when outbreaks inevitably happen, they spread more slowly, are easier to contain and don’t begin the legacy of sickness and death we’ve seen in so many other countries around the world — including many from which we’re still refusing to rescue Australians 15 months on.

It’s not an easy journey, sure, but the pathway would appear to be a clear one. And yet Scott Morrison has proved very difficult to pin down on things like timelines, or outcomes, or anything approaching a coherent strategy.

It’s cheap and unfair to snidely assume that Morrison bases all of his opinions, decisions and public pronouncements on cynical electoral calculus, although that assumption is also correct. He was a vehement supporter of “living with the virus” and demanding that borders be opened even as the early virus numbers grew — until he realised that the premiers slamming their state borders shut were the ones getting re-elected with sometimes historic margins.

So, then, keeping the borders shut became the obvious popular solution, except that as a Liberal PM this puts him uncomfortably at odds with the business community who, as we saw with Virgin Airlines Chief Executive Jane Hrdlicka, is all for seeing more Australians die if it means getting planes back in the profitable air.

In other words, Scotty from Marketing is caught between the competing demands of the voters and the donors and is balancing them by… well, doing nothing.

It doesn’t help that the Federal Government’s complete refusal to take responsibility for quarantine, despite it literally being the only health-related power the feds were specifically given in the Constitution, has meant that the states have had to do the heavy lifting. Meaning wins for Labor governments in Victoria and Queensland, who now look like the grown-ups attempting to solve the problem while Morrison offers nothing but sulky criticism. Such as, that Toowoomba is too inconveniently remote and ill-serviced to house a quarantine centre, since it’s a harrowing, untraversable [checks notes] 80 minutes from Brisbane and also has its own airport.

You have to admire the sheer gall of a PM who argues that a keynote economic statement by the Treasurer before the Federal Parliament was somehow neither the Government’s policy nor responsibility.

Similarly, the vaccine rollout itself is bedevilled by problems such as:

Suggestions have been raised to address the low take-up rates — like vaccination passports that allow holders to travel and not be limited by state border closures. But Morrison doesn’t even want to consider that since it looks like effectively forcing people to get jabbed and robbing them of their personal choice. You know, like the Morrison Government currently does with children if their parents want them to attend child care or school — which seemingly isn’t a pressing issue of personal liberty.

The situation is even more farcical when you consider that the rosy predictions of the Government’s own over-hyped Budget relied on a bunch of assumptions about Australia’s COVID-19 response, including full population vaccination by the end of the year and the opening of Australia’s international borders by mid-2022. 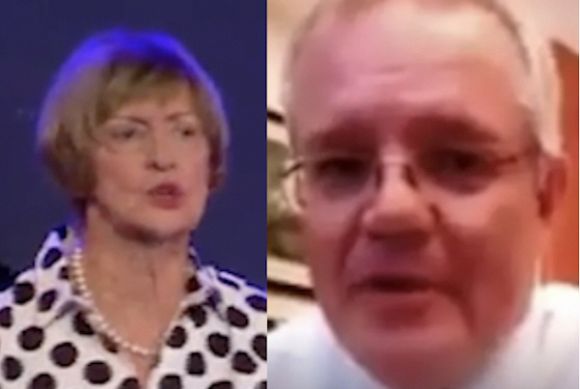 The last thing we need is the PM praying with religious fanatics or weeping over the personal cost of the pandemic he is supposed to be leading us through.

When Labor queried this optimistic appraisal of the unfolding situation in a post-Budget Question Time, Morrison responded with his trademark indignation:

“That is not a policy statement, nor is it a policy commitment of the Government… It is a Treasury assumption that has been put in place and it makes no reference, I note, to second doses. It only refers to doses.”

And mad though that statement undoubtedly is, you have to admire the sheer gall of a Prime Minister who argues that a keynote economic statement by the Federal Treasurer before the Federal Parliament was somehow neither the Government’s policy nor responsibility.

So, to recap. According to the Morrison Government, Australia will be fully vaccinated by the end of the year, but also that definitely won’t happen. And they also won’t be held to a timetable because everyone absolutely must get vaccinated to return things to normal, but shouldn’t have to if they don’t want. Quarantine is a Federal responsibility, but the Federal Government won’t provide facilities. But it will permit the states to do so, but will also attempt to veto those attempts. And Australia will welcome international visitors again early next year, the end of next year, not until 2023, or god knows.

And sure, that might seem confused and contradictory, but one thing is crystal clear: whatever happens, Scott Morrison will be there ready to claim all responsibility for any success.

Otherwise, it was definitely someone else holding the hose, mate.

Prime Minister Scott Morrison is continuing to back a domestic vaccine passport despite opposition from the New South Wales and Queensland Premiers. #auspol pic.twitter.com/2vHk0D6Sbd