A VIVID illustration of the current Federal Government’s approach to natural disasters occurred in Northern NSW this week.

After thousands lost their homes and some their lives in fierce storms and record rising floodwaters, many may have been cheered when they heard the military had been deployed to aid the recovery.

The Australian Defence Force response “has been swift and it has been comprehensive,” declared Prime Minister Morrison confidently, in a press conference held on Tuesday, 1 March.

"There is a sense of reassurance when the ADF rolls into those streets,” said Dutton.

And, indeed, locals may have felt some relief, had any of those troops actually coasted in.

The army's finally turned up in northern NSW but they're filming themselves emptying an already packed trailer of rubbish while 1000s need help, food and medicine

Photo ops, all the way down, under Morrison's watch

The first hint of an Army presence for many people in the Northern Rivers region was on Sunday, 6 March, when a dozen or so troops were seen being filmed pointlessly unpacking a trailer already full of rubbish — and then repacking it. They were afterwards observed pretending to deliver some milk and groceries. Not supplying medical assistance, shelter or helping people get back into their homes, no, but playacting.

Yes, it’s photo-ops all the way down under the Morrison Government. Now with even the military being subverted and diverted from emergency operations by one vain man’s relentless drive for positive PR.

In accordance with this official “all camera, no responsibility” policy, a photograph of this piece of public theatre was soon posted by PM Morrison onto his official Instagram account. 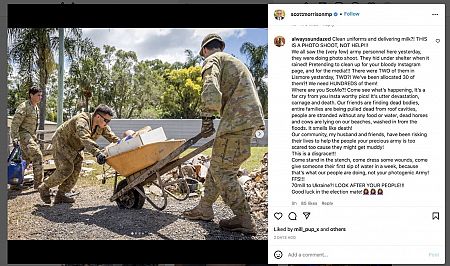 Happily for some, this stunt rather backfired for the PM, when a gobsmacked local filmed the performance on his phone and posted it to his own account.

‘We all saw the (very few) army personnel here yesterday,’ wrote @alwayssundazed, “they were doing a photo shoot. They hid under shelter when it rained! Pretending to clean up for your bloody Instagram page, and the media!!! There were TWO of them in Lismore yesterday, TWO?! We’ve been allocated 30 of them?! We need HUNDREDS of them!’

Also on Instagram, @nini.barker said the locals’ anger was not directed at the soldiers, who they knew were powerless to defy their orders:

‘There are soldiers amongst your rank who wanted to be deployed days ago, begging their superiors to be deployed, but the answer was no. And though they are “here” now, locals can overhear conversations between soldiers around how powerless they feel at being order to sit and wait as they watch locals risk their lives with no qualification or proper equipment.’ 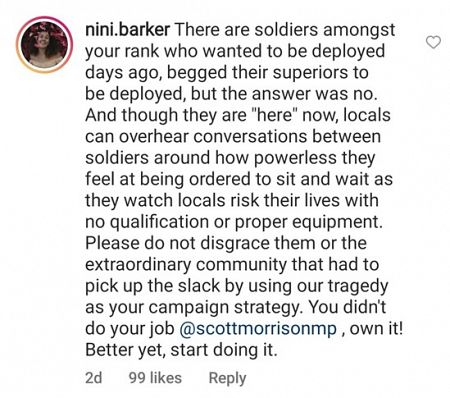 With this Government, before any clean-up, first comes the cover-up.

And so it was that the photograph of the ADF’s foray into outdoor art, along with all the accompanying online feedback, expeditiously disappeared from Morrison’s beloved Instagram account.

Then, to mop up any stragglers, in rode the cavalry, in the brooding form of Defence Minister Peter Dutton.

When challenged about over-promising, Spud plays the 'if you criticise us, you criticise the troops' card.#auspol pic.twitter.com/ZrZ2uPSSmm

On Seven’s Sunrise, Tuesday, 8 March, receiving an unexpected grilling from David Koch about the patient ADF response to the emergency, Peter Dutton said efforts couldn’t begin until there were “troops on the ground”.

The Defence Minister claimed 763 had been deployed. He had perhaps forgotten saying 2,000 troops had “rolled into the streets” the previous Friday.

When Koch said this was not enough, the former cop exclaimed that he wouldn’t “cop criticism of our fine men in uniform”.

“Or women,” he added, as an afterthought.

He said people “should have a bit more respect for” the Defence response.

“I’m not criticising our troops,” Koch groaned, “I am just saying there should be more.”

“Hmmm,” frowned Dutton grimly, slightly shaking his mo’ai-like head, “it sure sounds like it, Kochie.” 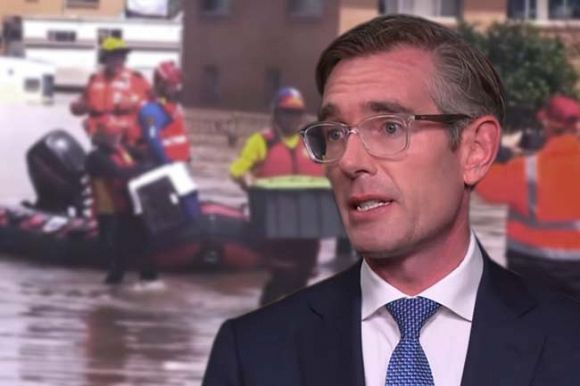 …. Minister Peter Dutton went on Radio National this morning to say that it was the Council's and emergency services' job to respond to disasters.

“The ADF supplement that,” he said.

Dutton also said the deployment was held up in many places because they couldn’t send ADF  personnel into “danger zones”. Presumably, local residents in dangerous spots should just grin and bear it.

They aren’t trained the way SES people are. And so if we send them in too early, they can get in the road.

Australians may now excused for feeling less “reassurance when the ADF rolls into those streets”, knowing their own leaders regard them as danger-shy and inadequately trained. Chinese and Russian military planners may be sleeping more soundly, however.

Scott Morrison was in Lismore on Wednesday, 9 March, for another PR opportunity, announcing the declaration of a Federal state of emergency at the Council chambers.

Better late than never, we suppose. It was notable to those on the ground that Morrison avoided the 300 or so protesters outside the Council building by driving round the back. He probably remembered, after his disastrous hand-grabbing display in Cobargo during the 2019-20 bushfires, that irate locals don’t photograph well.

Lismore demonstrator Kate Stroud, who lost everything in the flood, was one such irate local, telling The Guardian:

He at least could have had the decency to come and address the people affected. He just slipped in the back door….

He refused to come out. He didn’t hear firsthand how it’s affected us and what we need….

The Amy have been in the CBD but they have not been out helping people who live in the surrounding areas.

Much more could be said about all this, including the Government preferencing Coalition electorates for disaster relief, not funding a Queensland Government “priority” request for a flood warning system, and Disaster Management Minister Bridget McKenzie babbling something about the untouched $5 billion Emergency Response Fund being “more like a term deposit” than an actual fund.... but, alas, time does not permit.

Suffice to say, those who favour action over inaction and substance over spin, may find comfort in the fact that, despite valiant emergency PR clean-up efforts, plunging polls have the Morrison Government being swept away at the close, yet not close enough, Federal election. Morgan, for one, has the Coalition drowning in their last two surveys, 57-43.

But who knows what the future may bring? Lately, we seem to be seeing a lot more once-in-a-century events. And, as we saw in 2019, miracles –including those others call disasters – can happen.

Morrison's day of reckoning fast approaches, but there is still plenty of time for for many, many more photo opportunities.

This is an abridged version of the editorial originally published in the IA weekly newsletter. Subscribe now to read the full version online in the IA members-only area.

Reporter: Do you apologise for the way the response has been carried out?
PM: "I don't think any amount of support is ever going to be enough so every federal government would always be apologetic..." @SBSNews pic.twitter.com/4daKISwp79