Scott Morrison is continuing the Pentecostal agenda in Opposition, undermining the system of government he is still paid to uphold. Managing editor Michelle Pini takes a look at the former PM's aggressively expanding cult.

FORMER PRIME MINISTER Scott Morrison has been out and about doing what he does best: spruiking.

This time, thankfully, not to, or on behalf of, the nation but at a Pentecostal congregation presided over by controversial ex-tennis player turned evangelist, Margaret Court.

Readers too young to remember her tennis career may instead be familiar with Court’s distinguishing herself by serving up venomous attacks on gay and transgender people. This included her being so repelled by homosexuality that Court felt compelled to announce to the world she could not even bring herself to fly QANTAS because of the airline’s support for gay marriage, among other choice rants.

In similar unhinged vein, highlights from Scotty from Marketing’s sales sermon delivered at Court’s happy-clappy venue in front of hundreds of adoring worshippers included sharing that he "still believe[s] in miracles" and that God still loves him, despite his election loss. Oh, and anxiety is “Satan’s plan”, apparently.

Plus, such sage advice as:

"We don’t trust in governments.”

“We don’t trust in the United Nations, thank goodness!”

Somewhat concerning, perhaps, for a person who – just a few short months ago – was (inexplicably) charged with the job of leading Australia's government!

Despite the bizarre nature of Morrison's latest foray into fundamentalist public life following his Government’s spectacular electoral defeat, it has given rise to an interesting school of thought on the ex-PM. It goes something like this: Why should we, the people who kicked his party to the kerb, be concerned with what he does or with whom he does it, now that ScoMo is yesterday’s news?

And there is merit to the notion that he is largely irrelevant to most Australians since Morrison not only lost the last election but effectively decimated the Liberal Party in the process — except perhaps to the converted, pardon the pun.

However, at best, this view is short-sighted and affords Morrison a free pass to continue on his merry path of destruction — for destructive is surely the most appropriate descriptor for Scotty's reign.

At worst, ignoring Morrison’s increasingly disturbing behaviour risks permitting the "Seven Mountains Mandate" to continue to grow and this should be concerning for every thinking – and as yet, not converted – Australian.

Briefly, the Seven Mountains Mandate is a global Pentecostal movement intent on taking over the key pillars of society – notably, including governments and defence forces – to bring on Judgment Day, so Christ can return. Of course!

Unfortunately, this is not satire.

There are four key reasons why Scott Morrison’s post-election conduct is concerning and should not be laughed off or ignored.

1. STILL A MEMBER OF THE PARLIAMENT OF AUSTRALIA

Firstly, as a Federal Member of Parliament, Morrison is being paid a base salary of $211,250 per annum, plus expenses. As well, when Morrison finally leaves parliament, whether voluntarily or not, Australian taxpayers will continue to pay him a yearly lifetime pension of about $200,000 plus expenses.

While this is quite a comedown from his earlier prime ministerial salary of $549,250, it is undeniably a substantial handout, particularly if Morrison is not fulfilling the key parliamentary role of representing the people of Cook, or otherwise performing his parliamentary duties.

Ironic though all this seems, through his antics as PM, Morrison certainly managed to diminish most people’s faith in the institution of government. Now in Opposition, he is happily and systematically maintaining this "calling" by publicly advising anyone still prepared to listen to him that they should mistrust governments.

Even putting aside the fact that he is no longer the leader of Australia’s government, as he is still a Member of Parliament, Morrison is laughing all the way to the bank as long as he is being paid by the taxpayer while simultaneously disparaging the system of government he still represents.

3. WORLD DOMINATION IS THE PLAN

The mission of Morrison’s Pentecostal faith – a cult that espouses the Seven Mountains Mandate – is literally world domination. This is the unequivocal and openly stated primary Pentecostal aim.

The so-called Seven Mountains are:

This extreme cult, to which our former Prime Minister pledges allegiance, does not simply want to convert us all, it wants to take over the world.

And this inescapable underlying principle to which Morrison is committed makes his taking of taxpayer money on false pretences particularly troublesome.

4. CULT PROPPED UP WITH OUR MONEY AND LAWS

Then there's the bolstering of Morrison's brand of religious fundamentalism with government handouts.

A few government gifts handed to wealthy Pentecostal congregations include the following examples.

During COVID, the WA Margaret Court Pentecostal cult branch declared that the blood of Jesus would protect parishioners from the deadly virus, but deigned to provide sanitiser anyway. Nonetheless, a fortnight after this declaration, the church received more than $500,000 in JobKeeper, plus a $50,000 Federal Government cash flow boost. That's a lot of sanitiser.

Hope Unlimited Pentecostal Church in New South Wales was handed $660,000 in JobKeeper payments and later posted a $1.6 million profit, up $43,355 in profit from the previous year.

And ScoMo's own Horizon Pentecostal megachurch was the recipient of $533,694 in total government subsidies, including $110,000 worth of public money through a Department of Home Affairs initiative known as the Safer Communities Fund.

It is important to note, too, that as these megachurch cults are listed as "churches" they are also not legally required to pay any tax.

Independent Australia will be investigating just how much government money has been funnelled into the Pentecostal cult in more detail over the coming weeks.

Finally, there is the lone policy Morrison passionately spruiked throughout his Prime Ministership: the aptly named Religious Discrimination Bill — a fit-for-purpose bill designed to discriminate against the non-religious and further entrench his cult's power and influence.

Morrison’s record in government is of a Prime Minister leading a Government characterised by failure and corruption at every turn.

There is also his performance at the last election, where ScoMo led the Liberal Party to its worst defeat since 1983.

Add to this his current ramblings about not trusting governments and it appears at least one of these Pentecostal Seven Mountain goals – the infiltration of government and the military – is no idle threat. 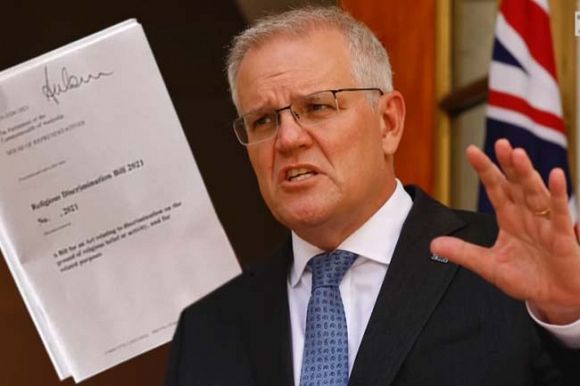 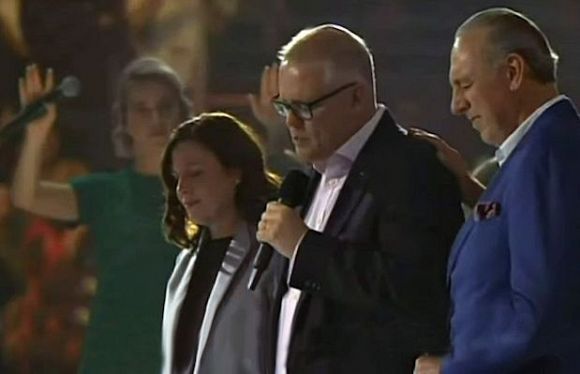 Electing candidates from churches like Scott Morrison's Pentecostal Church and packing them into parliament is damaging to a viable democracy.