A CURIOUS ASPECT of the now widely-studied Ashby TV interview was the timing of its airing — Sunday, 7 September.

Had it been aired a week earlier, on Sunday, 31 August, it would have been at the start of a Parliamentary sitting week.

That could have been very nasty for the Coalition, especially Pyne and Brough.

You cannot lie to the House — only fudge.

As it is, Parliament does not resume until Monday, 22 September. That gives everyone two weeks to take stock and polish their responses.

I will be speaking on this issue when Federal Parliament resumes. I witnessed, sometimes on a daily basis in February, March and April 2012, what appeared to me an entirely professional relationship between Speaker Slipper and his constituent advisor James Ashby.

Danby claims Ashby was paid $100,000 by Channel Nine for his ‘tell-all’ expose. That’s about a dollar a lie. He doesn’t say that Ashby’s spin doctor Anthony McClellan is a former 60 Minutes producer.

If he's telling the truth this time, there's a powerful message to all MPs from this: the politics of personal destruction waged by Tony Abbott in Opposition, and carried through to his obscenely expensive Royal Commissions into Prime Ministers Rudd and Gillard, have no proper place in Australian public life, Danby said.  The admission from Mal Brough, Mr Slipper’s successor in the Federal Seat of Fisher, that he directed a G. Gordon-Liddy-style black-ops misappropriation of the then Speaker Slipper’s confidential diary is one that Prime Minister Abbott should very carefully consider.

Danby reckons he’s also going to try to get the Commonwealth Director of Public Prosecutions involved:

Taking him at his word, James Ashby claims to have been induced by Liberal MPs into making his sordid claims against Peter Slipper. What he told 60 Minutes last night about these alleged inducements directly contradicts what Mr Ashby put on oath in a sworn affidavit (See attached copy of the false account in Ashby’s affidavit). Accordingly, I will be writing to the Commonwealth Director of Public Prosecutions today, inviting him to immediately investigate whether perjury has occurred. At the very least this claim of inducements should have been available to the appeal judges when they reviewed Justice Rare’s judgement on these matters.

Let’s hope Danby has the tenacity to push for answers.

Danby closes on perhaps the most damning element of Ashby’s story — the Hungary trip:

Please see Extra Minutes, what you did not see last night on 60 Minutes about Ashby’s desire to accompany Speaker Slipper on an official program to Hungary.

For those intrigued about Ashby’s meticulous, neat, uniformly written “diary” shown in short grabs on 60 Minutes last night, the Ashbygate Trust can provide the following example of Ashby’s “relaxed” handwriting. 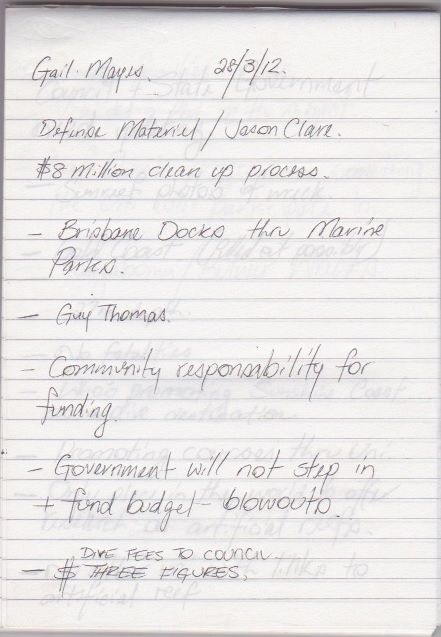