Friendly advice to Scott Morrison, Minister for Immigration and Border Protection on his trip to Sri Lanka from contributing editor-at-large, Tess Lawrence.

BEAM ME UP SCOTTY, I've prepared a diplomatic aide-memoire on Sri Lanka for you to read on the plane today. Sort of 'Sri Lanka for Dummies'.

First up, don't forget that Sri Lanka's correct moniker is the Democratic Socialist Republic of Sri Lanka. Got that? The name covers all contingencies. Except one. It is run by an uncrowned monarchy.

Secondly, on no account get into any white vans. Especially if there is one waiting for you on the tarmac.

It's a bit of a fad by the government – called 'white vanning'. Sort of like planking or water boarding.

Next, everyone in Sri Lanka has the same surname – Rajapaksa.  Including all the elephants in and out of the room and all the leopards and the rest of the fauna and flora. Remember that. It will come in very handy.

That includes the President and Cabinet Members, MPs  and big businesses. Think the Obeid clan.

Speaker of the Parliament – Chamal RAJAPAKSA

Private Secretary to the Minister for Finance and Planning – Shameendra RAJAPAKSA

Okay, that's enough, you get the picture. It's getting late and I'm tired of typing the same name all the time.

Anyhow, even if Ministers do have another surname and even if Sri Lanka big business CEOs are not called Rajapaksa, behind the scene, there is likely to be a family member pulling the strings.

One more tip, make sure you don't let anyone else pack your suitcase on the way back. I'm not talking about any gifts from the President, but those sneaky refugees will do anything to get to Australia and you need to be on the lookout in case they hide one or two of their kids in your suitcase.

And I'm not even going to brief you on Sri Lanka's complicated caste system. All you need to know, for the purposes of your visit, is that the Rajapaksas are right up there.

Let me know if they like your pressies. Those old customs and border protection patrol vessels will come up a treat with a lick of paint.

After all, they're of no use to us. We've excised the whole of Oz from the migration zone. What a class Act.

Wouldn't it be a scream if those refugees used the boats to flee to Australia? Thank goodness they're not sea worthy. The boats I mean.

Bon Voyage Scotty.  Take some time out for yourself. Get away from High Court challenges and The Great Unwashed.

You'll find the Rajapaksas are your sort of people. 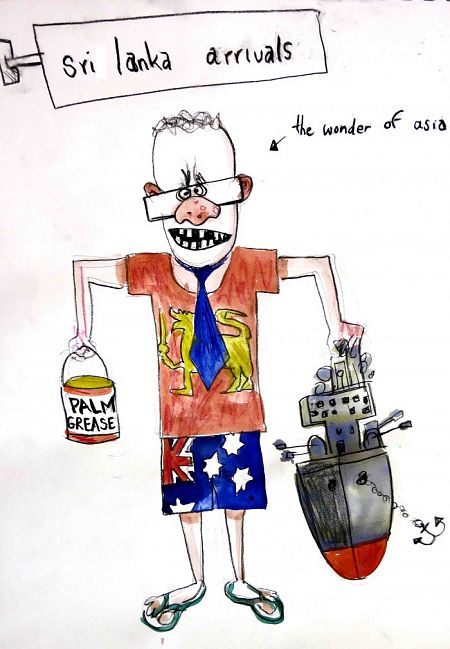