Australia's new health minister says Medicare spending is out of control and must be pegged back or we'll all be ruined! Unfortunately for her, the hard numbers show her claim to be an absolute furphy. Glenn Murray reports. 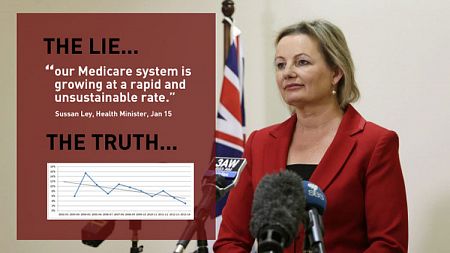 "…our Medicare system is growing at a rapid and unsustainable rate.”

This is an outright lie.

The following are some graphs that show the truth.

Medicare spending in context (in millions)

The first graph shows the Federal Government’s expenditure on Medicare in comparison to our GDP and its tax revenue, as well as its overall health spending. (Note: Medicare GP expenditure is the amount the Federal government spends on GP Medicare rebates (out of hospital, non-referred attendances).)

Of course, the above graph doesn’t illustrate the rate of increase each year, just the absolute dollar amount.

As Ley was talking specifically about the rate, let’s have a look at that.

Firstly, let’s look at Medicare expenditure as a percentage of GDP and tax revenue.

The red line shows us that Medicare expenditure is growing more slowly than our tax revenue and at almost the same rate as our GDP.

Now let’s take a look at the actual rates of growth.

The below graph shows Medicare’s growth rate — the purple line.

This confirms what we saw in the first graph — that everything is still growing. GDP, tax revenue, health expenditure and Medicare expenditure are all still increasing, so no surprises there.

It also shows that, at the moment, everything’s increasing at about the same rate — between 2.28% and 5.45%. Sure, that’s still a difference, but it’s nothing like what was going on in 2008, when tax revenues decreased due to the GFC and health expenditure was increasing at its fastest rate since 2002.

And it shows that the rates of increase have settled down and drawn closer together; there seems to be less volatility.

Importantly, we can again see that, at the moment, Medicare is growing more slowly than our tax revenue and only slightly faster than our GDP.

But it’s when you look at the overall trend of the lines that you see the real lie in our Health Minister’s words. Because the trend tells us about the ongoing growth rate, and it’s this that she says is “rapid and unsustainable”.

The rate of growth is slowing … for everything

The following graphs show each of the above charts, but with a ‘line of best fit’ added, to illustrate the trend — to show whether the growth rate has been increasing or decreasing over the years.

In other words, we know all the measures are increasing (growing); these graphs show whether that growth is speeding up or slowing down.

We can see that GDP growth is, in fact, slowing:

And Medicare growth is slowing too:

So, in summary, growth is slowing for all the key measures.

Yes, Medicare is still growing each year, just as our GDP and tax revenue are — but that growth is slowing down. This is hardly the “rapid and unsustainable rate” our Health Minister has been citing to alarm the public.

This story was originally published at glennmurray.com.au and has been republished with permission. The graphs were prepared by Glenn and compiled using official Government figures. For more on the methodology used and the precise sources, refer to Glenn Murray's original story here. Also, follow Glenn on Twitter @divinewrite.

17 January 2015, 11:30am Australia's new health minister says Medicare spending is out of control and must ...
Join the conversation
comments powered by Disqus
News updates