Mathias Cormann warns of Labor's 'reds under the beds'

Mathias Cormann warns of the dangers of Labor's "shift to the left" as Bill Shorten talks of redistribution of wealth, but is socialism on the cards for Australia? John Passant reports.

YOU JUST KNOW a government is desperate when they rabbit on about their meek and mild opponents as "reds under the beds".

That is just what Minister for Finance Mathias Cormann did last week. In a speech to The Sydney Institute on Wednesday, Cormann warned of the dangers of Opposition Leader Bill Shorten’s "politics of envy" and the dangerous overreach in "his shift to the left".

In a vomit of verisimilitude, Cormann reminded us of the evils of the "Communist" regimes.

As [Bill Shorten] looks ahead to the next election, he has made the deliberate and cynical political judgement that enough Australians have forgotten the historical failure of socialism.

The Berlin Wall came down 28 years ago, which means roughly 18 per cent of Australians enrolled to vote were born after the fall of the Berlin Wall and the failure of a system of government that destroyed the economies of Eastern Europe.

Bill Shorten now believes the politics of envy will work for him politically if not economically.

Hey Mathias, it’s getting crowded under the bed. Reds, Cormannites and same sex couples. Bigger beds instead of bigger bombs.

It is the sort of rousing anti-Communism that will have millions flocking to vote for the Turnbull Government. It is not just that taxing trusts as companies and making minor changes to negative gearing and the capital gains tax are Joseph Stalin writ large, it is that Australians will reject these sorts of policies because they know they fear a Shorten wall of brutal authoritarianism and dictatorship.

The Red Scare is obviously catching.

In response to some people painting the truth about there being no pride in genocide on statues of mass murderers that the Australian ruling elite celebrate as heroes, Turnbull, echoing Cormann’s neo-McCarthyism, wrote:

But it is also part of a deeply disturbing and totalitarian campaign to not just challenge our history but to deny it and obliterate it.

This is what Stalin did. When he fell out with his henchmen he didn’t just execute them, they were removed from all official photographs — they became non-persons, banished not just from life’s mortal coil but from memory and history itself.

Tearing down or defacing statues of our colonial era explorers and governors is not much better than that.

What a sad, pathetic man.

Turnbull is almost right about the statues and Stalinism. The non-persons in Australian society are Aboriginal and Torres Strait Islander people. The statues themselves reflect a Stalinist-type need to worship the people the rich imagine are heroes of the past. They do this for current political purposes of unity around the fake god of Australian nationalism — and to hide the brutal past.

These statues are in fact a reflection of the whitewashing of history and the denial of the genocide that these barbarians wreaked upon Aboriginal society, either directly, or as "discoverers" enabling the genocide.

Where are the plaques and statues remembering all the massacres white society carried out and the heroes of the resistance to genocide?

Here is a map of the massacres, from the Centre for 21st Century Humanities at the University of Newcastle, NSW: 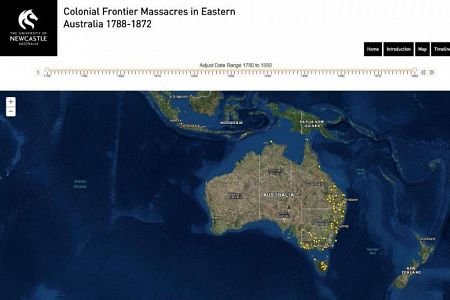 Cormann described the truths painted on the statues as "sadly part of a left wing agenda that is taking hold". I agree. Telling the truth is part of my left wing agenda. I hope it takes hold.

Socialism from above takes two forms. The first is the ridiculous idea that the Red Army marching into a country can bring socialism. What it did, was export Stalinism, a form of state capitalism, to nearby countries. The working class uprisings against the "Communist" dictatorships – for example in East Berlin in 1953 and in Hungary in 1956 – give a glimpse of the reality of its anti-working class structure and the potential for real change.

The second is the equally ridiculous idea that by winning control of a capitalist parliament the left can introduce "socialism" — normally some warmed-over, nicer capitalism.

The alternative to these twin souls of top-down socialism is socialism from below, to quote Marx and Engels, the emancipation of the working class must be the act of the working class. Liberation comes not through the "Red Army", or the Labor Party for that matter, but through workers taking mass action, as workers themselves. Only when the vast majority of workers establish new democratic institutions can we begin to build a society in which production occurs to satisfy human need.

So what is it in Labor’s current program that has so frightened Mathias Cormann and Malcolm Turnbull? Shorten talks about inequality. He hints at a slight redistribution from the rich to the less well off.

Shorten is tapping into a rich stream of unease and disquiet over growing inequality in Australia, exemplified by falling real wages, social security cuts to those most in need and young people unable to buy a home.

Cormann can deny it all he likes but the reality is the rich are getting richer and the rest of us are being left behind. We know this because we are living it every day.

Feeding Gina Rinehart more profit will not produce some magic trickledown showering of wealth and prosperity over the rest of us. Profit is reinvested in job-cutting machines or paid to investors in the form of big dividends. Often it is shifted offshore to avoid Australian tax.

Far from being at the vanguard of the revolutionary left, Shorten and co are at best about giving us some titbits from the table of capital to buy us off without in any way addressing the fundamental inequality that is capitalism.

Bill Shorten is no Jeremy Corbyn or Bernie Sanders. He denies the comparison.

The defeat of the Turnbull Government will be a default win for the ALP and their minor redistributive program. An ALP victory opens up the possibility of a challenge from the left over time as Shorten Labor, in practice, exposes its commitment to capitalism as much as Cormann and Turnbull.

We got a glimpse on Saturday in Melbourne of the potential for change of ordinary people when over 20,000 people marched for marriage equality.

We must keep tearing down the statues of capitalist lies – literally and figuratively – no matter what the injustice and no matter who is in government. These struggles plant the seeds of socialism.

Read more by John Passant on his website En Passant or follow him on Twitter @JohnPassant. Signed copies of John's first book of poetry, Songs for the Band Unformed (Ginninderra Press 2016) are available for purchase from the IA store HERE.

.@MathiasCormann: I understand that we have a challenge to make people remember socialism leads to inferior outcomes https://t.co/Zf9KoUfdmG pic.twitter.com/tMvfVwiuA4

Without Mathias Cormann I never would have known the Soviet Union was built on negative gearing and discretionary trusts.#auspol

'For the many, not the few': Corbyn's lesson for Australian Labor https://t.co/0jP5WUVabr @IndependentAus