Looking towards Rome and awaiting Caesar

In the wake of the U.S. election, managing editor David Donovan considers what America means to the world as well as considering the alternatives. 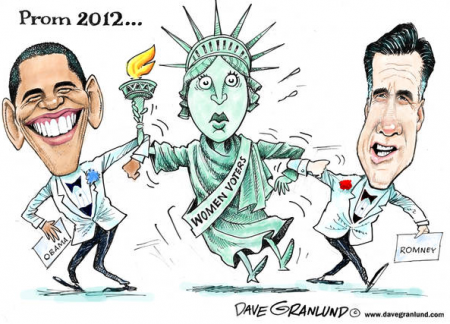 AS THE United States of America votes, and the results come in, it is worthwhile stepping back to reflect upon what this huge, and hugely influential, country means to Australia and the world.

As I write, discussions about this election, which are being held half a world away, radiate out across virtually every channel and broadcasting medium. This will happen wherever you are in the world ― whether your nation is an American "deputy", like ours; part of the "axis of evil"; or lies somewhere in between.

Say what you will about the rise of China, or the seemingly inexorable American decline, the truth remains that this grand nation is our world's Rome. We look to it − whether it be with admiration, respect, disapproval, apprehension or fear − but still we look to it — and at times like this, we look and wonder where it might lead us over the next four years.

Of course, even allied (some may say chained) as we are here to this behemoth − and maybe somewhat because of it − America gets a lot of bad press in Australia. In campaigning for an AusRepublic, one of the common objections heard is that this necessary change might deliver a U.S. style presidential system ― despite this option not even being on the table. Nevertheless, the repulsion many Australians feel towards the American U.S. presidential campaign, dominated as it is by long and involved preparation, vulgar amounts of funding from vested interests, and garishly over-the-top rallies is palpable. Something about this system offends, it seems, more low-key Australian sensibilities, and makes many question its fairness and freedom.

On the other hand, Americans do get to elect their head of state ― something not possible here. This individual has strong powers to guide the nation, though these are circumscribed and overseen by a powerful bicameral legislature, which is a fiercely democratic institution historically not so hamstrung by partisan politics as our's perpetually is. And Americans' commitment to democracy is such that they are even able to directly elect local public officials, such as chief law officers and police chiefs.

Of course, the world also looks dimly at America's militarism, its support for despots and the way it throws its weight around in the world. And, in recent times, it is certainly true that its futile "War on Terror" − which resulted in an illegal invasion of Iraq; the limiting the rights of its own citizens; abuses, such as forced renditions, torture and limited justice at Guantanamo Bay; and even the campaign against whistle-blowing journalists, such as Julian Assange − has led to its moral superiority being called into question and has maybe even helped bolster the stocks of its enemies.

All this is perfectly valid criticism. Indeed, IA is dedicated to highlighting and campaigning against such abuses and wrongs wherever they occur ― as we have done and will continue to do.

However, we must also look closely at the other side of the coin.

That is, if not America — then whom?

Would we feel as comfortable with the staunchly undemocratic China as the global hegemon ― something that may indeed become a reality in the not too distant future. Would Russia be a fairer and more equitable global master? Or would it become an overtly colonial power, like Britain and France and Spain were before, in their times as the "Rome" of their day.  In its long and brutal history, for example, Britain has invaded all but 22 nations in the world. Was that nation a better, fairer and more merciful world leader than the United States has been. Put simply ― no, it was not.

Some look with eagerness towards the decline of United States as the global superpower and, as a result, the world's policeman. We should look at this possibility with apprehension ― as we wonder what lies behind the curtain.

As for this election...

Well, when America decides, I hope the votes will reveal that it opted for the calm, sensible and (in some ways) progressive leadership of Barack Obama, as opposed to the myopic regressive corporatism of Mitt Romney and his backers. We saw where that led the world under George W. Bush, we do need to open that door again.

The world looks to Rome and waits breathlessly for the new Emperor.