Since the City of Port Adelaide Enfield publicly declared its support for an increase to Newstart in August, six more South Australian councils have joined the push to boost this meagre allowance. Pas Forgione reports.

ACROSS SOUTH AUSTRALIA, local governments are sticking up for their residents who are out of work and living in poverty, as part of a grassroots campaign led by Anti-Poverty Network SA (with support from SA Council of Social Service and Uniting Communities).

Since early August, when the City of Port Adelaide Enfield in Adelaide's northern suburbs became the first Council – not in South Australia, but in all of Australia – to publicly support an increase to Newstart Allowance, six more Councils – three metropolitan and three regional – have also decided to advocate for financial relief for struggling unemployed people, for seven Councils overall.

Newstart – $269 per week, $160 per week below the poverty-line – is less than 41% of the minimum wage and less than 18% of the average wage. It has not been raised in real terms for 23 years, which is part of the reason why Australia ranks second-worst among developed nations for poverty among the unemployed.

Compounding this is the growing number of people with serious health issues – over one-quarter of Newstart recipients have a diagnosed disability – and the number of sole parents with kids on the payment, due to reduced access to the slightly less meagre Disability Support Pension and Sole Parent Pension. 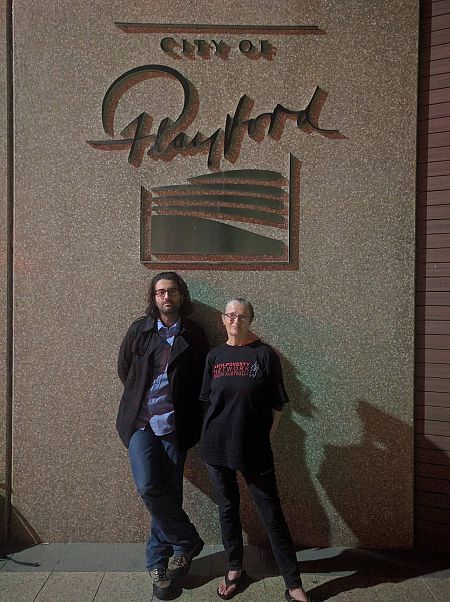 The power of the campaign lies in the dedication and courage of local job-seekers, who called, emailed, and met with their mayors and councillors; who willingly shared their stories of financial and personal hardship, and job-searching in a depressed labour market, as Wendy, Sarah, Claudia, Brendan, Bonnie, Amethyst, and Aidan did; who fliered, postered, letterboxed and door-knocked; and, critically, who showed up at council meetings in large numbers, often composing over half the audience, to keep their representatives accountable.

It has been claimed by some that since Newstart is a Federal issue, councils cannot, or should not, take public positions on this payment, nor whether or not it is adequate. This stance is the somewhat widespread "roads, rates, and rubbish" conception of local government. It is a narrow, conservative vision, one worth rejecting.

Councils, of course, do often take public stands on issues outside their jurisdiction — including on marriage equality, coal seam gas mining, renewable energy, cashless welfare, drug testing, and many other social and environmental issues. The most recent and controversial example of this, of course, has been the growing debate around changing the date of Australia Day.

And this is fine and good, and should happen more often!!

Why shouldn't local governments advocate on behalf of their residents, represent their interests and values (even if the issue is outside their jurisdiction)? Particularly their residents who have the least power and resources.

Perhaps it a sign of how undemocratic, remote and inaccessible the other two levels of government are perceived to be – and are – their lack of responsiveness to the wishes of ordinary people, the greater extent to which big business dominates the political agenda and the deep bipartisan consensus that exists across so many issues that citizens are turning to councils to be their voice on many important matters.

In any case, there should not be any doubt that poverty and unemployment are local issues. The low rate of Newstart has profound impacts on job-seekers, whose mental and physical health, quality of life and ability to effectively search for work suffers while on the payment. It also has profound impacts on local communities, local economies and on council community services, whose programs increasingly – particularly with repeated government cuts to the charity sector – support those who are struggling.

How can a significant part of the community being impoverished, being unable to eat well and regularly, being unable to afford to leave the house often, being excluded from their community, their social supports and networks, having no disposal income to circulate through local businesses, not be a local issue?

THE CITY OF SALISBURY EXPERIENCE 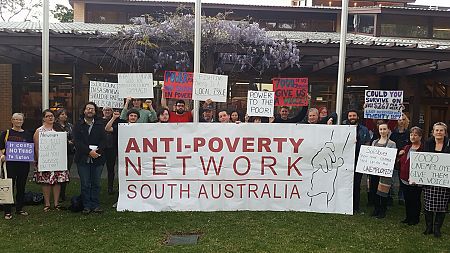 Unfortunately, not all Councils have agreed that the disadvantage experienced by unemployed residents on Newstart is something about which they should be concerned. The City of Salisbury, with 6,300 unemployed people, for an unemployment rate of 9%, twice refused Anti-Poverty Network SA's request to speak at a Council meeting. Both times we were told that the issue was “outside the Council's jurisdiction” and therefore not something it could hear about.

Incredibly, even while other Councils were passing motions on Newstart and writing to Social Services Minister Christian Porter and Human Services Minister Alan Tudge, a push was needed, simply to start a conversation with the Salisbury councillors.

Things came to a dramatic head on the night of Monday 25 September. Over 30 unemployed people and other welfare recipients, representing all five of Anti-Poverty Network SA's branches, packed the gallery at Salisbury Council with signs and placards to watch Council pass a motion presented by Councillor Beau Brug (overruling Mayor Gillian Aldridge, who previously refused our speaking requests), allowing local job-seekers to address the October Salisbury Council meeting.

It was a long, intense night, including a four-hour wait for our moment, despite our item having been listed near the start of the agenda — but we won, at last, our right to speak.

Quick sum-up of last night's @CityOfSalisbury meeting where we fought for and won our voice: pic.twitter.com/IiISHvgaJT

On Monday 23 October 23, Anti-Poverty Network SA returns and, hopefully, Salisbury Council will join the growing number of South Australian councils standing up for their unemployed residents by sending a strong message to the Federal government and the rest of the community about the need for Newstart to be raised.

If you live in Salisbury, consider contacting your councillors.

Let's hope councils in other parts of Australia also begin showing leadership and courage on this issue, and start advocating for their unemployed residents as well.

Pas Forgione is the coordinator of Anti-Poverty Network SA.

Less than a month until @AntiPovertyWeek…
We have some inspiring speakers & workshops scheduled for our conference, can’t wait! pic.twitter.com/BYvw136M5s

Our Trek for #JobsJusticeAndDignity marks the end of @AntiPovertyWeek in Adelaide — members and supporters welcome! pic.twitter.com/mVAhTYkAN5