The City of Port Adelaide Enfield makes history by becoming the first Australian council to publicly advocate for Newstart to be increased.

THE CITY OF PORT ADELAIDE ENFIELD, in Adelaide's northern suburbs, made history on Tuesday, 8 August 2017, by becoming the first local government authority in Australia to publicly advocate for the Newstart allowance to be increased.

Roughly 5,100 Port Adelaide Enfield residents are unemployed, for an unemployment rate of 8.6% — significantly above the South Australian average.

The City of Port Adelaide Enfield has demonstrated leadership by sticking up for its unemployed residents — residents living in poverty, struggling to find work in an unfavourable labour market, and facing wave after wave of attacks on their rights and their characters, from hostile governments and media outlets.

We are glad they recognised the strong social justice, public health, and economic arguments for why Newstart needs to be raised.

Newstart has not been raised in real terms since 1994. Australia ranks second-worst in the developed world for rates of poverty among the unemployed. Newstart has fallen far behind the rest of the community and is now less than 18% of the average wage, and less than 41% of the minimum wage. 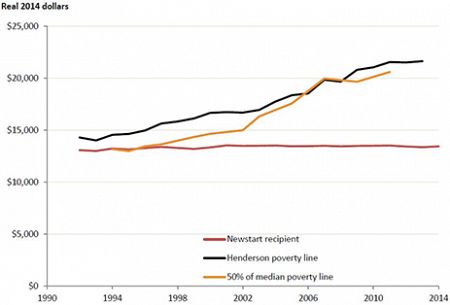 According to research by ACOSS (Australian Council of Social Service): 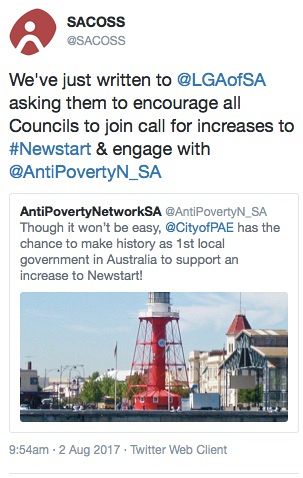 Compounding things, as always, is the grim and worsening ratio between jobs and job-seekers.

There are roughly 170,000 job vacancies nationwide. Those competing for that small number of vacancies include around 730,000 unemployed people and 1.1 million underemployed (those who are working but who are looking for more work). The number of job-seekers totals 1.8 million, which equates to one job for every 11 job-seekers.

An alarming implication of this growing shortfall in jobs is that Newstart, more and more, is becoming an arduous, long-term ordeal rather than a brief bout of pain. About 70% of Newstart recipients are unemployed for more than 12 months.

Changes to eligibility requirements for two other welfare payments – Disability Support Pension and Parenting Payment Single – mean that there are also growing numbers of individuals with significant health issues (25% of Newstart recipients have a diagnosed disability) and sole parents languishing on the payment.

Financially, it is almost impossible to plan beyond the next pay day, long-term planning on unemployment benefits just does not exist.

Christmas time during my periods of unemployment was always the hardest for me personally. I get a $60 blouse from my grandmother while I give her a $5 hankie. Yes I know, it’s the thought that counts, family togetherness and so forth. But still I’d like to be able to think about my grandmother with a $20 note instead of $5.

A rise in Newstart payments will take away the stress of living in poverty and allow people to focus on life in a more positive light, which creates a healthier lifestyle. By increasing unemployment benefits, we don’t have to live in poverty — we can live with dignity. 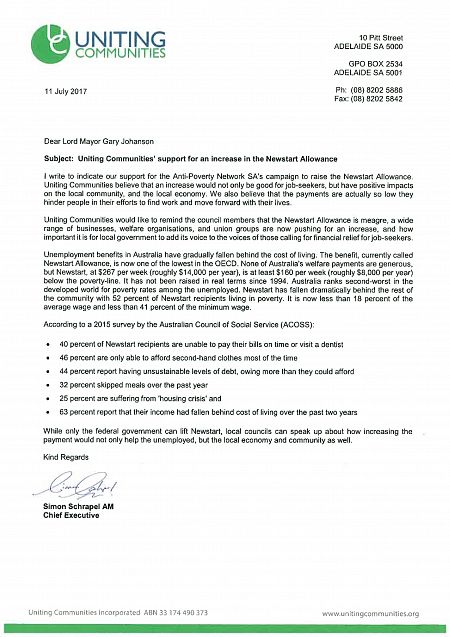 Heather, who has experienced multiple periods of stable employment, followed by phases of unemployment, continued:

I am now working part-time and am relatively safe in my position. I still rely on Centrelink payments to supplement my income and I am finally beginning to work my way out of the financial hole in which I found myself during my last period of unemployment.

That is still nearly half of my disposable income going to rent.

My current employment status reflects the vast majority of the trans community in South Australia. As a community, we generally come under the category of unemployable or underemployed.

The motion, calling on Port Adelaide Enfield Council to lobby the Federal Government to increase Newstart, as well as producing a report into how Council can assist local unemployed residents who are struggling, was sponsored by Councillor Michelle Hogan and seconded by Councillor Peter Jamieson. It passed 11 votes to 2. 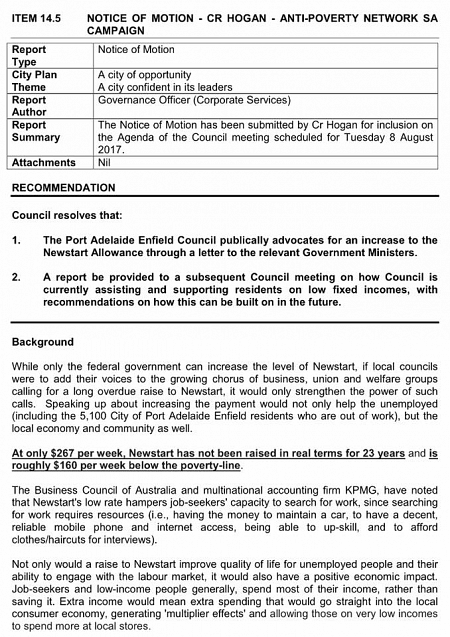 Anti-poverty activist Pas Forgione said this was a positive decision all round:

It is really a no-brainer. Good for local job-seekers, good for the local community, and good for Council services and programs that are placed under more and more pressure because of increasing levels of hardship. Even business groups have acknowledged the inadequacy of Newstart.

This positive decision is a sign of increasing public sympathy towards the unemployed and others receiving Centrelink payments — and a sign that those on welfare payments are organising themselves and pushing back.

We hope other Councils will follow. There is no excuse for them not to.

Pas Forgione is the coordinator of Anti-Poverty Network SA. You can follow Pas on Twitter at @PasForg.

The successful Anti-Poverty Network deputation to the City of Port Adelaide Enfield Council! Well done. Now, for the rest of the country <3 pic.twitter.com/uawz81ojXq 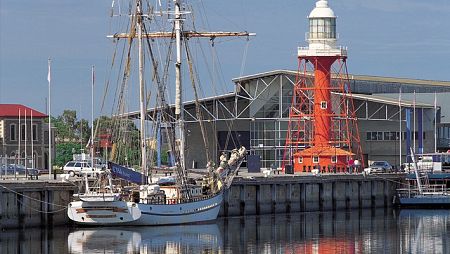