A leaked letter from the Queensland State Government appears to show Gold Coast Mayor Tom Tate and another councillor deliberately misleading the Council over a development proposal.

Last Thursday (15/9/16), the Gold Coast Council considered an application to approve an application by developers Sunland to build a controversial new high-rise development on the Southport Spit (commonly known as The Spit). Currently, the Town Plan only permits buildings of up to three stories in this area, however the Sunland development proposes to build two 44 storey towers.

The proposal also attracted controversy earlier this year, when it was revealed Liberal MP Stuart Robert, while still a Federal minister, had lobbied the Council over the development, despite it not even being in his electorate.

Last week, a document leaked to the Gold Coast Bulletin also showed planning committee chair Councillor Cameron Caldwell had also been lobbying other councillors to support the proposal. He did this despite his own town planners providing 14 strong reasons why the development should be refused. Mayor Tate has also come out strongly in favour of the development.

Despite city planners recommending it be refused. Caldwell lobbies for Sunland tick https://t.co/yjW3wXVlbe@MayorTomTate

Last week, the Council was to vote on the proposal, however, before there could be a vote, Mayor Tate moved a motion to defer consideration of the project for 12 months to allow the State Government to "formulate a masterplan" for The Spit. This has led to Sunland threatening legal action against the Council 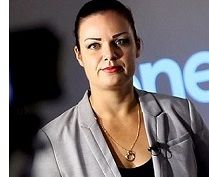 In the latest development, documents leaked to former mayoral candidate Penny Toland (pictured right) reveal Mayor Tate and Councillor Caldwell appear to have deliberately deceived the Council over the position of the State Government in relation to the project prior to the vote.

In a post on Facebook on Tuesday 20/9/16, entitled ‘A NEW LEVEL OF DISINGENUOUS CONDUCT’, Penny Toland wrote:

Last Thursday I attended the GCCC chambers at Evandale, along with approximately 100 community members, to await the outcome of the vote on the Sunland development application.

Before councillors could vote, Tate moved a "mayoral motion" to defer the decision until the State government formulates a masterplan for the Spit.

Tate claimed a letter received by the State government supported this decision. To that end Planning Chair Clr Caldwell read one sentence of this letter (highlighted in yellow below).

'Like council, the state government is also aware of the potential of development in the area to attract tourism, to promote economic development and to create jobs.'

Clr [Daphne] McDonald rightly requested the entire letter be read out to provide the context. This request was refused.

Highlighted in red are clear and unambiguous statements that show just how deceptive and disingenuous the conduct of Tate and Caldwell was in their successful manoeuvre to stop a "no" vote for this development taking place.

You can read the full highlighted letter below: 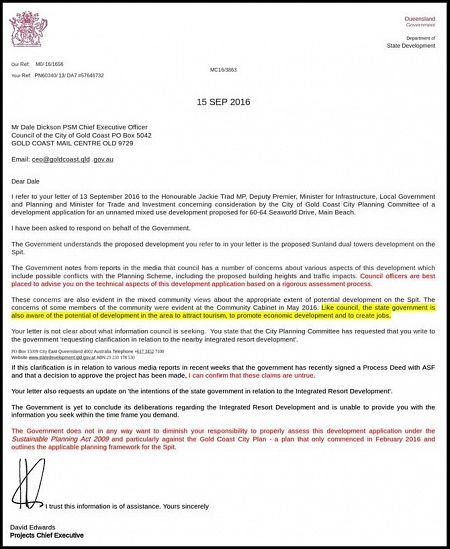 None of these revelations have so far been reported by the mainstream media.

Independent Australia interviewed Penny Toland about the Gold Coast Council this week for its latest exclusive weekly member’s only podcast.

Penny Toland talks more about this controversial Sunland development and it flawed application process, as well as about the bullying of Mayor Tom Tate, his apparent ignorance concerning the meaning of "conflict of interest", as well as the the Crime and Corruption Commission investigation into Federal MP Stuart Robert and several councillors and Council candidates.

This podcast is available to Independent Australia subscribers HERE. (To subscribe to IA for as little as $5, click HERE.)

Get the truth. Subscribe to IA for as little as $5 a month.