Video emerges of former minister Stuart Robert avoiding awkward questions from his constituent by going on the attack — including against senior figures within his own party. Managing editor David Donovan reports.

Video has emerged of disgraced former minister Stuart Robert attacking Tony Abbott’s former chief of staff Peta Credlin over her integrity at a community meeting on the Gold Coast this week.

Other vision, obtained exclusively by Independent Australia, also showed Robert angrily denouncing several of his constituents at a Fadden electorate candidate debate, while evading numerous questions about his alleged conflicts of interest.

Trust was a recurring theme at the lively town hall-style debate, held at the Paradise Point Community Centre on Tuesday night (14/6/16). Early on, candidates were quizzed about their thoughts on an article written by Peta Credlin, concerning declining levels of trust in certain politicians.

A stony-faced Stuart Robert began his reply by slamming the credibility of the former staffer, who is now a Sky News political pundit.

“Great question, although I find the idea of Peta Credlin talking about trust an extraordinary statement, so let’s move on from that one.”

As shown by the video below, this response was greeted by gasps, jeers and cheers from the assembly below:

Stuart Robert’s "fundraising issues" sit at the heart of community concern about his conduct and ethics. This has been the case since it emerged in February this year that, in 2013, a Chinese businessman gave him and several other Coalition ministers, including then Prime Minister Tony Abbott, expensive Rolex watches, none of which any of them subsequently declared.

Ever wondered what was happening in that tense exchange b/w Peta Credlin and Stuart Robert? http://t.co/K4VopMuEC3 pic.twitter.com/u13xYGYrfm

Robert lost his ministerial post soon after, when it was revealed he had privately travelled to China in 2014 to assist a friend and business partner secure a lucrative deal with a Chinese business while purporting to act in an official capacity. Robert had also claimed official expenses for the trip.

Last month, it was revealed that Stuart Robert has used his fundraising body, the Fadden Forum, to secretly bankroll supposedly “independent” candidates at the Gold Coast City Council election to the tune of $60,000. It was also revealed that this same fundraising body had received over $100,000 from the lead lobbyist for a Gold Coast development company that was seeking approval to build a controversial high-rise development on the Gold Coast Spit.

Despite all this, Robert is still standing for re-election at next month’s Federal election for the northern Gold Coast seat of Fadden. He has held this seat since 2007 and his margin currently sits at more than 14 per cent.

A noticeably hoarse and visibly petulant Stuart Robert spent much of the meeting attacking Labor identities as they moved to ask him questions about his probity and potential conflicts of interest.

Former State Labor and Gold Coast mayoral candidate (and IA contributor) Penny Toland, a constituent of Robert’s, asked the embattled MP about his links to developer Sunland and its controversial Mariner’s Cove development. Robert responded by scornfully attacking Toland over alleged Labor and union links. He then flatly denied any conflict, saying the question was “irrelevant” because the Federal Government have “nothing to do with planning” matters.

You may watch the exchange below:

On social media, Toland was scathing about Robert’s “tirade of abuse” and evasive answer:

While Stuart replied with a tirade of abuse towards myself he ended with the comment that last time he checked federal government has nothing to do with planning.

This is correct, but what he failed to mention was the fact that he used $60 000 from this re-election campaign account to secretly fund two Gold Coast council candidates, who if elected, would be voting on whether to approve the Sunland development. Bolton was successfully elected in Division 4 whilst Stevenson is back working in Stuart's office. 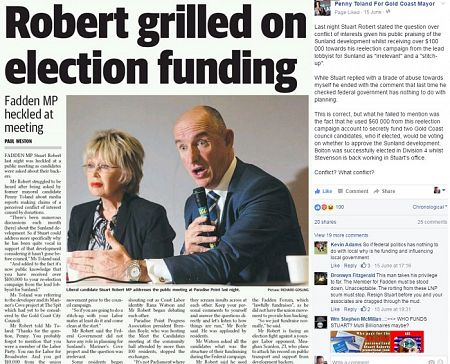 Further casting a cloud over Robert’s answer, on Thursday (16/6/16), the Gold Coast’s local newspaper reported that Robert had written a letter to the Council urging them to approve the Sunland project, even though The Spit it is not in his electorate.

Robert responded to the paper with trademark belligerence and obfuscation, reportedly asking the paper:

“… why the Gold Coast Bulletin aren’t offering their support for this project.”

Also questioning Stuart Robert’s credibility was former Labor candidate and Fadden voter Gail Hislop, who asked why people should vote for Robert after he had been found to have breached “parliamentary standards”.

An angry Robert interjected repeatedly during Hislop’s question, before eventually beginning his answer with:

“I’m pretty sure you and your Labor mates won’t be voting for me anyway, Gail.”

Watch the full exchange below:

Disturbingly, Hislop told IA she was abused and physically assaulted by one of Robert’s apparent entourage after the meeting:

Once the meeting had finished, an elderly man came up to me and started yelling at me saying that I was a “disgusting woman” to ask that question. I said it is a public meeting and we live in democracy. He then shoved two fingers very hard into my shoulder to push me back as he stepped forward.

I immediately said: ‘Do not assault me again and just go away and leave me alone.” He did not and continued to yell at me so everyone could hear him and kept pointing his finger very close to my eye.

This man kept stepping forward forcing me to keep moving back or he would have been on top on me. I kept repeating the same statement: “Do not assault me again and step back and leave me alone.”

I walked off to the back of the room to speak to some people and he came at me again yelling in my face pointing his finger very close to my eye.  Again, I said do not assault me and leave me alone.

He did not stop and a woman said: “Leave her alone and stop it. You wouldn’t do that to a man I bet.” 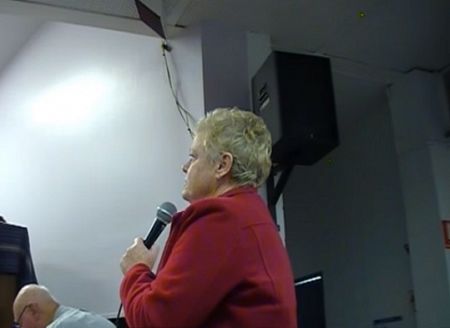 She said the man then moved to threaten Penny Toland.

I moved around several chairs to get away from him and then he went to Penny and started on her. I said to him do not assault her. He pointed his finger in a very threatening manner in Penny’s face nearly touching her.

It was shocking and I must admit it shook me up as I was not expecting a violent outburst like this. Once he finished yelling at Penny, he went straight up to Stuart Robert and was all smiles and laughing. I was told, but have no way of knowing that he was a member of the LNP.

LNP LEAKING AGAINST ROBERT OVER LINKS

The steady dripfeed of damaging leaks about Robert in the Gold Coast Bulletin may suggest moves may be afoot within the Liberal Party to unseat the scandal-prone former minister from his northern Gold Coast electoral throne.

Supporting this speculation are the words of former Federal Labor candidate Rana Watson. Watson had engaged in verbal duel with Robert throughout the entire evening, but it was his very pointed question about Robert’s links to certain previously unheard of companies that raised many eyebrows.

You can watch Watson’s question and Robert’s response here:

It seems that, despite the scandal swirling around Stuart Robert, his margin in Fadden is almost certainly sufficient to see him re-elected on July 2. However, if Watson’s question involves information from nervous Liberal Party insiders, it is quite conceivable a by-election may be forthcoming in Fadden in the not too distant future.