Mark Latham may have succumbed to the creed of neo-liberalism, but he has summed up the Abbott right to perfection in his new Quarterly Essay, says Graham Jackson. 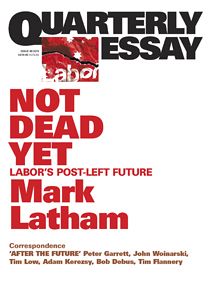 No doubt, there were events happening in Melbourne other than the dining opportunities listed on labourday.com, but Latham was close enough to the spirit of the occasion for me to give him a go.  And there they all were, the Party’s reforming prime ministers on parade – Curtin, Chifley, Whitlam and Keating – and by the end of the essay, I was convinced the light on the hill was still flickering and that the prospects for a centre left social democratic party were still good.

But the prospects of a trade union/Labor alliance, Latham argues, are not so good. And that, of course, is the direction Julia Gillard is taking the party now, possibly more out of expedience than conviction so close to an election. While Latham makes no specific reference to this latest direction of Gillard's Labor, it’s clear he wouldn’t endorse it. Julia Gillard herself, more distant from an election, might also agree that in looking after the interests of workers and their jobs Labor is of necessity a social democratic party.

Latham sets himself the task of suggesting the means whereby Labor can remake itself as a broadly based social democratic party now the ‘workers’ of the past have become today’s aspirational small business people. He has specific proposals about organisational reform, about poverty, about education reform which I’m sure others will be able to discuss with more insight than me. I’d only note in passing that his ‘New War on Poverty’ is close to Gillard’s in so far as both recognise that values are passed from one generation to the next and that 'the same ethos of irresponsibility and hopelessness' will persist unless the chronic unemployed cycle is broken.

On the subject of education, Latham approves of the aspirations of more recent Australians, particularly those from Asia and, increasingly, India, in providing tutorial assistance for their children outside school. Perhaps I look at this from a Lee Kuan Yew ‘poor white trash’ perspective, but I’m not convinced that aspirational parenting in this instance – when it prescribes a child’s outcomes in such detail – is doing much for the general well-being of the child. Particularly not when as Latham allows, children by age three 'have acquired more than half of the language they will use for the rest of their lives' and that as a consequence 'schools, at best, are [only] a useful addition to the learning continuum'. But this is only my personal experience of parenting.

I’m on safer ground applauding Latham’s analysis of ‘The Rise of the New Right’, its cowardly, intimidatory tactics and its perversion of free speech. This chapter is worth the price of the essay. Latham describes the Jones and Bolts as

... political animals: scragging, authoritarian types who seek to limit and control the public debate. This is the dangerous thing about fanaticism. The new right will not rest until its views are the only views remaining in the political marketplace.

That is not to say one has to agree with everything these alarmingly heroic individuals say and do. The weakness of Latham’s argument, it seems to me, is the proposition at the heart of his argument — his and Keating’s neoliberal faith in the efficacy of open, free markets. He has nothing to say about regulation, or about predatory capitalism. He derides Rudd’s overblown rhetoric on the global financial crisis without addressing the issue at its heart — that unregulated financial markets could trade in housing loans to aspirationals who had no capital, had never saved a dollar and were never likely to.

Here, we are in a realm Latham should certainly be addressing. “The most pervasive public belief,” he writes:

...is economic aspiration. The sons and daughters of the working class have had a taste of financial success and they want more.

No problem with that. What needs to be discussed, however, is the difference between individuals who want to advance themselves 'through hard work and enterprise', whom Latham acknowledges, and those he does not — those whose aspirations/dreams might be better described as fantasies.

This might also lead to a discussion of the relationship between open, free markets (regulated and unregulated) and unlimited growth. It might lead to a discussion of western civilization’s dream/fantasy of remoulding the Earth, a giant ponzi scheme, in which each investment Earth makes is paid for by the same Earth at ever increasing cost. Given his recognition of global warming as 'the issue that can change everything', it’s strange Latham doesn’t discuss this more fully.

While noting someone else’s observation that

he might also have noted the existence of a third party — those who just want to indulge themselves, at whatever cost.

So, at the end of Labour Day, I felt, oddly enough, quite uplifted. The light was still flickering. Those who would snuff it out, the odious Bolts and Jones, were over-reaching so far that, while their repainted, deodorised Abbott might well become Australia’s next PM, he would inevitably be undone, as Latham argues, by the ‘crap’ science rhetoric that got him there.

Fast forward to Good Friday.... I’m not sure of what the relationship between Good Friday and the workers’ day might be but, between the two, the Labor Party has managed to call itself out in the most spectacular manner. Now we have Kelty, Crean and M. Ferguson out and about spruiking their rewritten version of Hawke/Keating — just as we have Reith, Vanstone and P. Costello on the hustings with Redux Howard. That’s history for you, I guess. Less convenient truths – like Howard’s ‘Children Overboard’ moment or Hawke/Keating’s mid-1980’s facilitation of the rise and rise of Rupert Murdoch – are forgotten.

Rupert Murdoch might well have got where he has in any event, and, on one view of political philosophy – that “elite oligarchy is the unbendable law of human nature” – be in his present position of power. Another theorist as well as a man of action, Louis Brandeis (1856-1941), believed:

We may have democracy or we may have wealth concentrated in the hands of the few, but we can’t have both.

Brandeis was one of America’s reforming Supreme Court justices, a “Robin Hood of the law” figure, who defended workplace and labour laws and fought monopolists like JP Morgan.

Failing to address the problem of wealth concentration, others have suggested, means the best we can hope for is that our democratic institutions protect us from direct oppression. Unfortunately they will never save us from manipulation. This view stems from the belief, right or wrong, that the “many” are apathetic and divided while the wealthy “few” are driven and united.

Less debatable is the observation that, in Australia, a wealthy few have large stakes in the primary means of manipulation – the mass media – and that they use it ruthlessly. Recently we have seen how our own democratic parliament has been unable to resist manipulation – the conflation of ‘free press’ and ‘free speech’ – and failed to address the problem of media abuse.

I’ll conclude this Good Friday postscript by going back to Mark Latham. The current media manipulation, he believes, reflects the changing nature of conservatism in Australia, which is now going about the business of 'trashing' its own political tradition — 'devouring its own heritage and values, but not caring enough to complain':

'The Abbott right is like a rat-snake, eating itself from the tail up.'

In the meantime, Latham suggests, Kevin Rudd might make a good climate change minister… Well I won’t hold my breath for that, but this is a Mark Latham essay and, in consigning Bolt, Jones and Abbott to the dustbin of history, he gets one old timer’s vote of thanks.