Latest UK poll: All the way with the United States of Trump?

There’s now a sense of panic in the air and one suspects that data crunching may be tipping that Trump could win, writes Kellie Tranter.

MARSHALLING THE resources of big data and mass surveillance undoubtedly enables those living on the floating island to know in real time which way the silent majority will swing in the upcoming U.S. election.

That’s exactly the sort of information the established order would want to know in advance, particularly with a contender like Trump.

There’s now a sense of panic in the air and one suspects that mass surveillance and data crunching may be tipping that Trump has his nose in front. The UK's Independent reported yesterday that betting patterns suggest a possible Trump win.

Some commentators have described Trump’s position as terminal. But would those same commentators bet their house on the silent majority in this country not voting for Pauline Hanson for prime minister if that choice were available to them?

Yes, Trump is moronic, erratic and irrational, but in those respects he’s consistent both privately and publicly. That is to say, people have accepted that he can be a dickhead, which makes him more raffish to some and provides him with a lot more wriggle room than most.

Let’s face it, most politicians the world over would be unelectable if you knew what they thought and said privately, which is why the Clinton campaign office is having difficulty managing the Podesta email leaks, whereas Trump has survived. 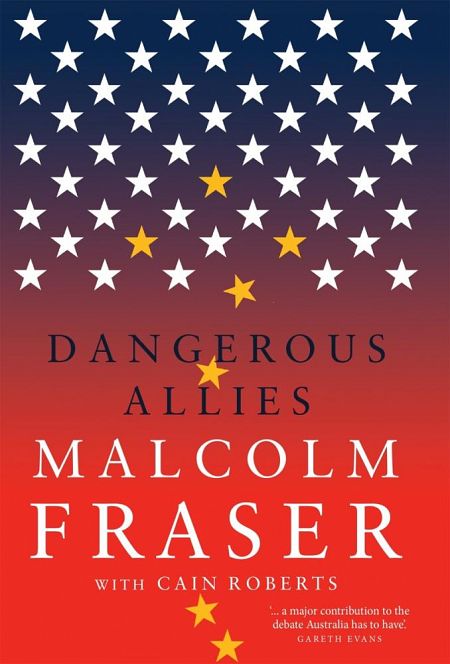 But a larger, more disturbing, issue is emerging for Australia from the possibility of Trump's election and that is our foreign policy position.

Those who have long urged Australia to maintain an independent neutral stance on many geopolitical fronts seem to have been vindicated.

The late former Australian prime minister Malcolm Fraser had long been calling for Australia to cut its close ties with the United States.

Yet over many decades, our major political parties have slavishly embraced the United States' position on international issues and, in doing so, Australia has inadvertently formed part of the groundwork for a person like Trump who, if he gets his hands on the red button, is a danger to the world.

In 2014, Australia was one of only two nations, along with the United States, to vote against the resolution to demand the end of the Israeli occupation of Palestine within three years. Trump remained neutral on Israel and Palestine until recent times when he has said that he won’t support the recognition of a Palestinian state without the approval of the Israelis.

What's Australia's position going to be? Will the Australian Government support nonsensical foreign policy initiatives like the “Trump solution” — giving the U.S. island territory of Puerto Rico to the Palestinians as compensation for surrendering Israel?

This year, Australia attempted to derail a ban on nuclear weapons at a UN meeting on disarmament because we rely on nuclear weapons as a deterrent to attacks on us. And now we see former nuclear launch officers pen letters against Trump. Trump is, of course, North Korea’s candidate of choice for President and has publicly stated that if Iran approached U.S. ships they would be shot out of the water.

michael moore is putting out his movie on DT tonight, yet he said Trump will win POTUS https://t.co/pQKatAZ13F

Trump has shifted his policy position on ISIS and Syria, has called climate change a Chinese hoax, will judge NATO members' spending on security before helping them face down a potential invasion and thinks it is unfair that there is a treaty arrangement under which the U.S. is obligated to come to Japan’s aid if attacked but Japan can’t come to America’s aid.

Who knows how Australia will be pressured to vote at international gatherings under a possible Trump presidency. And what will become of Pine Gap and the U.S. marines in the Northern Territory and the North West Cape, given escalating tensions in South East Asia and Trump's propensity for knee-jerk responses?

Statements by Opposition leader Bill Shorten that Trump is an unsuitable leader for the free world or comments by the Prime Minister condemning the actions or statements of Trump are of little comfort for our nation.

Consecutive governments failed to think through the consequences of their unconditional support for the United States Government and, despite the criticisms of Trump, we remain in lockstep with the United States on contentious international issues. Because of our other areas of subservience – particularly in financial and economic matters – unravelling and pulling back from that historical connection won't be as easy as it sounds

President Trump? That would put a huge question mark over the US-Australia alliance.

The polls may just be massively understating support for Donald Trump... or they may not.https://t.co/GmMuIDGnzx