“Mathematics allows for no hypocrisy and no vagueness.”

Stendhal’s claim is supported when one considers the mathematics behind the Landry Labor bullying claims, which simply don’t add up.

“…left the chamber in tears and in a state of high distress. I ask you [Speaker of the House] to review the video of the Prime Minister, his response to the Member for Capricornia and review the appropriateness of the tone of that response.”

#BREAKING: Capricornia MP Michelle Landry accuses Prime Minister Anthony Albanese of bullying her during Question Time and is demanding an apology. "I feel that I've been humiliated by him and the Labor party." #Auspol @SBSNews pic.twitter.com/05ZHWocGJL

Landry then appeared to detail her "bullying" claim for the benefit of the waiting cameras at a media conference.

Flanked by approximately 11 Liberal Party women looking suitably outraged and calling out “Hear, hear!” at appropriate intervals – Landry accused Prime Minister Albanese and the entire Labor Party, including the women (because let’s not stop at one accusation), of humiliating her in the chamber during Question Time.

Warming to her story, Landry added that it wasn’t the first time she’d been humiliated by Labor and that a smear campaign had even been launched in her electorate.

Landry then thanked her fellow female ensemble cast – which consisted of most of the female Liberal MPs plus at least one senator cameo (Bridget McKenzie), since there are only nine Liberal Party women plus one National in the House of Reps – for standing with her before adding:

“They’re a mob of hypocrites if they can say that everything is so wonderful on the Left. Well it’s not! They treat us appallingly … bullying! …Left! … no respect!… bullying! [and so on].”

The little performance did, however, stop short of all those present ripping off their bras in feminine solidarity.

IT JUST DOESN'T ADD UP

Now, we do not wish to dismiss bullying out of hand and so we will just, as Prime Minister Albanese suggested to a Sky News interviewer, “show the footage” of what occurred here:

Albanese is forced to give Spud a geography lesson about his own state.

The LNP MP who asked the question seems to be know it's another case of #SitDownBoofhead#auspol pic.twitter.com/1UGSr7X3W3

And it doesn’t only look to us as though Albo has no case to answer, pretty much anyone watching the footage can see he was addressing Opposition Leader Peter Dutton, whose attempt to correct the PM on Queensland geography – “Yeppoon” versus Yeppen – failed spectacularly.

It is clear from the video footage that Landry was also laughing at the absurdity of Dutton’s intervention and Albanese’s response to him.

Nonetheless, Speaker of the House Milton Dick also reviewed said footage and pronounced that there was no case of bullying:

"I did not see the Prime Minister show any disrespect to the Member for Capricornia."

Well, we didn't see Landry leave the chamber "in tears", either, but we did see that she did so after laughing heartily at Albanese's geography lesson aimed at Dutton and shortly after receiving a text message from a person or persons unknown.

As already established, the maths does not suffer hypocrisy but before we look at the incidences of utter contempt displayed by the previous Liberal Party PM and his band of misogynists toward women (both within and outside parliament), let’s just point out here that it was Landry who invoked the hypocrisy card, as well as the feminist card.

So, what do actual bullying and misogyny look like?

Here are a few examples straight from the Liberal Party playbook:

This all occurred during Michelle Landry's time in parliament. She was also in parliament and remained publicly mute, along with her female Liberal Party peers, during Tony Abbott's blatant misogyny towards former Prime Minister Julia Gillard.

Apart from being clearly hypocritical, the Member for Capricornia's recent stunt, coming as it did after she was caught on camera laughing at the supposed "bullying" she suffered, simply demeans these women and every other person who has suffered bullying and harassment. 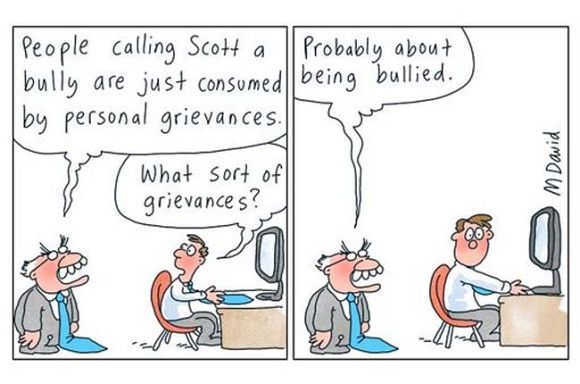 Scott Morrison's willingness to sign a stat dec over accusations of racism feels invalid considering his track record of lying.

Ignoring the mathematics, most of Australia's usual mainstream media suspects just picked up the manufactured bullying line and ran with it anyway, which is the point after all.

Because Dutton, Ley and the B Grade ensemble cast that is today's Liberal Party is now so irrelevant that any publicity, no matter that it is confected, no matter that there is not a shred of truth in the great gaslit bonfire of bullshit, is still publicity. And if there's one thing this Coalition cast is good at, it's performance art.

ICYMI: Belinduh has been through all the footage of the Yeppoon Yeppen exchange. Of note is Michelle Landry sitting calmly in the chamber afterward. Then she gets a message on her device & reaches for her glasses to read it. #auspol https://t.co/LnPexAftQL