Kevin Andrews: the master of disaster

The disaster-prone Kevin Andrews snaring a front-bench seat on Tony Abbott's team is something that leaves Barry Everingham downright bewildered.

JOHN HOWARD was a past-master at picking troglodytes  to supervise his draconian laws but Kevin Andrews is in a class all of his own. His disastrous implementation of Work Choices as Industrial Relations Minister under Howard was a case-study in how not to run a portfolio.

After shifting him out and handing the poisoned chalice to Joe Hockey, Howard kept Andrews on as a Minister, giving him Immigration where the thin lipped humourless extreme right-winger had the time of his life ruining the life of the hapless and, as it turned out, totally innocent Dr Muhamed Haneef.

This Indian doctor was somehow implicated in a so called terrorist cell in England—although he was at the time working in a hospital on the Gold Coast.

Never mind, Andrews had Dr Haneef arrested anyway, held in solitary confinement and  investigated extensively before eventually the AFP found that there wasn't a shred of evidence against him.

But this bible-bashing Minister hadn’t finished with the Indian doctor...not by long shot. Despite Haneef being shown by the AFP as having no case to answer, Andrews capriciously decided to cancel his work permit anyway. This was, of course, tantamount to deporting him.

It makes you wonder, had there been a case during South Africa’s appalling apartheid regime of a white man murdering a Black African and then escaping  to Australia, Andrews would likely have given the man permission to remain and put him up for an Order of Australia! 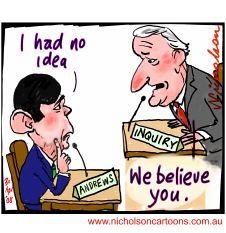 Dr Haneef was back in Australia recently where the Government  appologised unreservedly  for the outrageous and illegal treatment he received at the hands of Andrews. He was awarded a huge settlement, said to be in the millions of dollars. Luckily for Andrews, part of the settlement was that Dr Haneef drop the defamation charges he had against the incompetent and vindictive Minister.

Andrews himself should have been ordered to pay the settlement and all court costs connected to the case.

Tony Abbott should be censured for having Kevin Andrews on his front bench. It’s a measure of Abbott’s own attitude to the boat people—turn back the boats, let them drown.

And these are the people who say they can run this country. Let's hope we don't get to find out while Andrews is still an MP.
POLITICS AFP Barry Everingham boat arrivals Dr Haneef immigration Industrial Relations Joe Hockey John Howard Kevin Andrews Tony Abbott
Recent articles by Barry Everingham