Cost shifting and blame-shifting between different levels of government for underfunding of the health system has been treated like a national spectator sport for decades.

Ambulances piled up outside emergency departments? Blame the state governments!

Nobody seemed to be able to work out who was responsible for the Ruby Princess debacle, so with the Federal and New South Wales State governments, it fizzled out with the two levels of government left lamely pointing fingers at each other and calling it a draw. 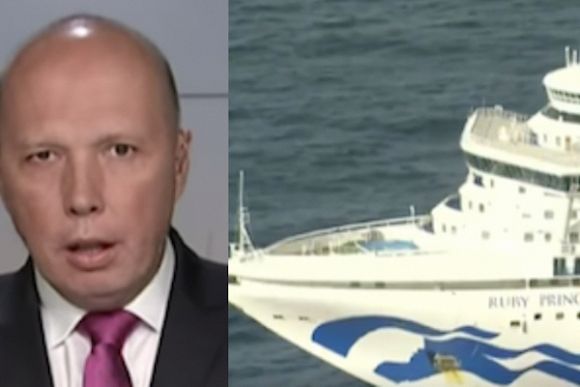 The Ruby Princess: How could this have happened?

Questions must be asked as to how the Ruby Princess, which will go down in Australian history as a super spreader of COVID-19, was allowed to enter the country.

Vaccine supply and quarantine are without doubt Commonwealth responsibilities, yet the Morrison Government botched the vaccine rollout and outsourced the quarantine part to the states. The states figured they could make do with the temporary solution of unsuitable hotel quarantine until the Federal Government got its act together and established purpose-built quarantine facilities — which it has so far failed to do.

After years of arguing about federal and state lines of responsibility, there was a glimmer of optimism when the so-called National Cabinet – a group of federal, state and territory leaders – was formed to deal with the emergency that is the COVID-19 pandemic.

It turns out the word “cabinet” may have been used in the title so that the Morrison Government could pretend that the deliberations of that group could be kept secret for decades like, you know, the actual Federal Cabinet.

Independent Senator Rex Patrick challenged this assertion in the Administrative Appeals Tribunal, which ruled that the group was not a real cabinet and that the deliberations should not be kept secret.  As Freedom of Information requests start to flow, we may develop a picture of those deliberations. As it should be. If decisions are being made about restricting the liberty and livelihoods of citizens, we have a right to know on what basis those decisions were made.

Of course, in response, the Federal Government rushed into Parliament a Bill designed to prevent the release of any further information from National Cabinet. It failed to gain support with Liberal Senator Gerard Rennick indicating he would cross the floor and Independent Senator Jacquie Lambie saying she would also oppose it.

So the small “c” cabinet which is not a big “C” cabinet came up with a National Plan. This was based on modelling which formed the basis of a political decision about how many hospitalisations and deaths would be politically acceptable as lockdowns were eased.  The plan would come into effect once a percentage of the population over 16 was vaccinated with a vaccine that would reduce hospitalisations and deaths, but not stop transmission to people who were not protected by vaccination. The latter group includes every child under the age of 12 and other vulnerable people in the community who, through no fault of their own, are unable to be fully vaccinated.

Meanwhile, every state has the right to control its own state borders. So the members of the National Cabinet, armed with the National Plan, went off in different directions to impose different restrictions and border closures.

Some states, like Queensland, are required to follow the public health orders imposed by the state’s chief health officer (CHO), while for other states, like NSW, the CHO's advice is FYI only. “Thanks, but NSW State Cabinet (big C) will decide which advice we heed and the circumstances in which we will ignore it.”

So Queensland, South Australia and Western Australia raised the drawbridge and maintained normal life for their residents with zero cases pending high vaccination numbers. New South Wales had the opportunity to nip the latest outbreak of the highly transmissible delta strain in the bud when there were as few as four cases in the community but inexplicably decided not to contain the outbreak, resulting in tens of thousands of cases ripping through a largely unprotected community.

Then NSW Premier Gladys Berejiklian resigned, opening the door for the ascendancy of new Premier Dominic Perrottet. Days into the job, Perrottet announced that New South Wales would open the international borders to Australian residents and international tourists.

Until PM Scott Morrison chided him later that day, with a reminder that international borders and tourist visas were a Federal matter and that no decision had been made on that timing, thank you very much:

"It is for the Commonwealth and Federal Government to decide when the border opens and shuts at an international level and we will do that."

As vaccination numbers rose to that “magical" 70% in NSW and despite then-Premier Gladys Berejiklian warning not to call it "Freedom Day”, the media called it Freedom Day, and the reporting on the celebrations in the street would fool many into believing that the pandemic was over.

Not so much celebration for health care workers dreading the prospect of the health system being overwhelmed by a surge of cases predicted in modelling by the Kirby Institute’s Raina MacIntyre et al.

There was nothing magical about that 70% number apart from magical thinking, mainly because it referred only to the percentage of the population over 16, which roughly equated to 56% of the total population, leaving 44% of people unvaccinated.

Which brings us to late October and the return of children to school in NSW and Victoria after months of lockdown and homeschooling — a state government decision.

Unvaccinated children crammed into close proximity with each other, masks optional up to grade six and an undercooked plan to improve ventilation or supply HEPA filters to improve air quality is a recipe for multiple school outbreaks and that expected surge of cases.

We do know that COVID-19 can cause serious illness and death in some children, but we have no idea of the long-term consequences of a COVID-19 infection on a child in later life, so if this scenario was posed as an experiment, I doubt that it would pass ethics approval.

Once the Federal Government decides they will reopen international borders to vaccinated travellers without quarantine, the states and territories will face another public health challenge.

The clunky division of responsibilities between the Federal and state and territory governments has long been used to shift costs and blame from one level of government to another and the management of the COVID-19 pandemic has highlighted some of those problems. It is long overdue for a comprehensive review.

BEREJIKLIAN vs BARILARO!@GladysB said we shouldn't think of Oct 11th as "Freedom Day."@JohnBarilaroMP said "Freedom Day is only a couple of weeks away", as his mic was CUT OFF!

Gladys came back and said "I'm not someone who's going to call the 11th of October Freedom Day." pic.twitter.com/n9jjY0KD3b

Professor Kerryn Phelps AM is a general practitioner, an advisory board member and conjoint professor at NICM Health Research Institute, an OzSAGE member, a City of Sydney Councillor, former Federal Member for Wentworth and former president of the Australian Medical Association. You can follow her on Twitter @drkerrynphelps.