Kathy Jackson back in Federal Court this week

Will Kathy Jackson finally run out of excuses and front up this Friday at the Federal Court to explain the alleged misappropriation of approximately $1.4 million in union funds? Peter Wicks reports.

ON FRIDAY this week, the Federal Court once again catches up with Kathy Jackson.

Jackson will return to court to attempt to explain the alleged misappropriation of approximately $1.4 million in union funds.

This case has dragged on for close to two years now and attempts to have Jackson actually explain herself have been met with excuse after excuse along with numerous failures to comply with court orders. Enough failures to comply to prompt Justice Tracey to state:

"I am conscious of the many inexcusable failures to comply with the court's orders. It's a matter that I have taken very seriously."

Let’s hope Justice Tracey is still in that frame of mind on Friday.

On Friday, Jackson is due to appear in court for the first time since she checked into a luxury psychiatric facility last October just before she was due in Federal Court.

Most people thought this was a weak excuse — an attempt to delay proceedings. However, she had a letter from a doctor that despite being described as “vague” by the Court, won her an adjournment until this Friday.

Whilst apparently being mentally unfit to instruct her lawyer, she was out on the town with blogger, Michael Smith, on the night of the Martin Place siege, and was also able to head into town for a pedicure while most people thought she was in hospital. 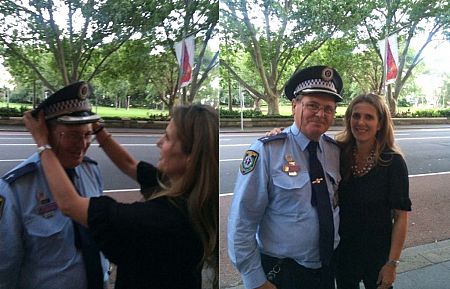 Jackson out on the town! The above photos were posted on her friend and house-mate Michael Smith's blog

During the time she was deemed mentally unfit to give legal instruction, Jackson's legal representation also made a lengthy submission to the Royal Commission. It has also been alleged that her legal team also made queries regarding workers’ compensation for their client.

This would make Jackson the third member of the faction to seek workers’ comp payments on mental health grounds related to work with the union — the other two being Marco Bolano and Leonie Flynn.

In an event that may see Jackson call the shrink once more, a suspicious fire was reported last week at Kathy Jackson’s Wombarra house on the NSW South Coast.

Remind me when next due in court. Oops. Said that out loud. Kathy Jackson's house damaged by suspicious fire http://t.co/iKT8SJF8TK via @smh

The fire which started in a wheelie bin was confined to one room of the house and was being treated as suspicious,

“because the occupants said it was suspicious”,

the Wollongong police told The Australian.

Many people I have spoken to also think that the fire was suspicious, however, no doubt, for different reasons to Kathy.

I was at a function on Friday night and lots of people I spoke to mentioned the mystery blaze.

“This is like the flood of great convenience that destroyed Jackson’s documents but left Thomson’s untouched”.

“Is this another case like the exercise book being stolen or abducted by aliens?”

Someone else laughingly added:

“… or maybe the missing tin with all the receipts?”

I actually thought it bore remarkable similarity to Jackson’s NSW ally, Katrina Hart’s mystery fire last year when Hart claimed someone had set fire to a tree next to her house using wood-chips and kerosene — perhaps an arsonist from the 18th Century?

I can understand people’s scepticism after Kathy Jackson's long string of excuses to avoid any scrutiny of her behaviour along with her seemingly remarkable wealth for a union employee.

In fact, when we look at Jackson’s own report of the flood that she claimed at the Royal Commission had destroyed all her financial documentation, she seems to have neglected to mention something.

'She (Kathy Jackson) advised that carpets had been damaged and needed to be replaced; that some computers and copiers were damaged; and that the ceiling in parts of the building was damaged.'

The minutes make absolutely no mention at all of any financial records being destroyed, something most people would consider to be worthy of mention.

Jackson’s property is in Wombarra, which I believe is an Indigenous name meaning “black duck”. Quite fitting really.

The local paper reported that the wheelie bins were, apparently, in a different location to where they had been left.

Kathy Jackson due in Federal Court next week, is this gonna be her next excuse to not show up? http://t.co/hsH9Hqu7Cg #auspol #hsu #turc

Did someone jump the fence or gate with the intent of burning down the house, then decided that moving a wheelie bin and setting the contents alight was the best way? Clearly this is an arsonist with the same skillset and talent as the one Katrina Hart claimed set fire to her tree conveniently around the time of her election campaign launch.

Whatever the reason for the bin fire – reportedly virtually extinguished with a garden hose before firefighters arrived – we can be happy for some things.

First, that nobody was injured.

Secondly, that lawyers will, no doubt, have had a copy of the legal documentation at their offices, and with the smouldering bin occurring a week before Jackson’s court appearance, there'll be no shortage of time for lawyers to fill in any gaps and for Jackson to recover from any shock that might prevent her from finally appearing in Court.

Whatever you think of the fire, one thing is for sure…

There is rarely a dull moment in Jacksonville.