SOMETIMES, it's difficult to be an Australian in the UK.

When John Howard came to power in Australia in November 1996, by May 1997 I was in London, attempting to put as much distance as possible between myself and the rodent-like monarchist — who seemed determined to send Australia back to the days of Pig-Iron Bob.

However, the opprobrium was not to be entirely avoided, as Howard's George W Bush-like infamy would, at times, creep out into the global press. Such as during the infamous Tampa Affair in 2001 and then the appalling Children Overboard deceit in 2002.

Back then, we Australians in London were widely regarded as despicable racist rednecks due, quite understandably, to our Federal Government's calculatedly callous approach towards desperate, vulnerable asylum seekers.

It was a tough time to be an Aussie abroad — but it was far tougher being a refugee.

Regrettably, the mood around the workplace would only become worse on the mercifully rare occasions the smug visage of then Foreign Minister Alexander Downer appeared on British morning television — defending the indefensible with his faux British accent and trademark patronising chuckle.

Those were the days you dreaded appearing in the office and found excuses, if you could, to call in sick.

Now, we have former asbestos company lawyer Foreign Minister Julie Bishop out exercising what she calls "soft power" for Australia.

From her hawkish features, to her asbestos melting glare, to her clipped prosecutorial voice, she radiates waves of condescension and hostility.

This week, she was confronted by veteran BBC journalist John Humphrys on British morning radio. Unlike Australia's dismal media, which delights and pressgangs the Australian Government to come up with ever more oppressive ways to abuse the poor people fleeing horrors in their homelands, humanitarian Humphrys was not prepared to let Bishop off the hook when it came to confronting the asylum seeker Gulags we've established to our North.

Humphrys asks Bishop why Australia couldn't find a way to treat asylum seekers humanely, suggesting that the camps at Nauru or Manus Island were

"... breeding grounds for rape, rioting, malaria and mental illness that bear the look and feel of concentration camps."

"... they're not holiday camps... I have visited there and I am satisfied [that] people are treated appropriately."

Appropriate, yes, maybe — if you believe that getting your head staved in by a camp welfare officer with a piece of timber is fair and reasonable.

Even more cringemaking for expats in Britain – or, indeed, humane people of any nationality, anywhere – Bishop was not even across her brief, making gaffe after embarrassing gaffe during the brief exchange.

Principled Fairfax journalist Michael Gordon – who has done a series of excellent articles on the recent Manus Island murder and mayhem – covered a few of her worst blunders in a piece called 'Befuddled Julie Bishop confuses the facts over Sovereign Borders':

First came the assertion that the claims of asylum seekers ''are processed in third countries, and then we look for resettlement in other countries, including in Australia - and we've done this before and it worked''.

If this were the case, some of the concerns of human rights agencies would be allayed, but the message to boat arrivals is that they will never be resettled in Australia.

According to Immigration Minister Scott Morrison, the only resettlement option for those on Manus Island whose refugee claims are recognised is resettlement in Papua New Guinea, even though this is a matter of conjecture in PNG. The same, it appears, goes for those on Nauru.

Could it get any worse?

Then came, ''people are clearly having their applications for asylum processed there [on Manus and Nauru] and if they are found not to be genuine asylum seekers, they are returned [home]''.

The problem here is that no determinations on refugee status have been made - aside from one positive decision on Nauru - and the UN refugee agency has serious doubts about the capacity of either country to make determinations and give adequate protection to those who have fled persecution.

Bishop even tried, dismally, to defend Australia's treatment of children:

"Their children go to school, they have community centres … the standard of accommodation and the standard of support they receive, in many instances, is better than that received by the people of Papua New Guinea."

Gordon says this is a furphy, referring to a statement by Greens' Senator Sarah Hanson-Young, who (unlike Bishop) has been to both the Manus and Nauru facilities:

''On Christmas Island, none of the children are going to school, and on Nauru, the situation is even worse,'' says the Greens' immigration spokesperson. ''In the middle of the Nauru compound, there is a tent where they run activities for the children for two hours a day, and that's it. There is no proper education and no dedicated learning space, let alone 'schooling'.'' 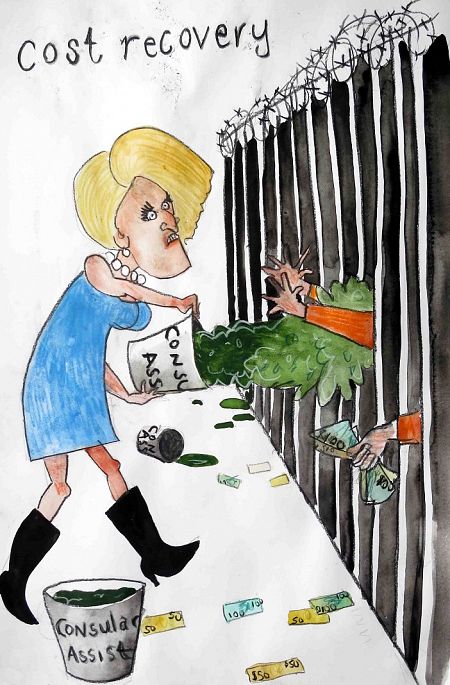 Julia Gillard may have established these appalling concentration camps, but at least Kevin Rudd as foreign minister had the decency to sound somewhat apologetic when questioned about them. Rather than sounding like a concerned humanitarian, Bishop came off with the officious and perfunctory air of a camp commandant.

For a supposed foreign minister, it was not a good look.

And of course, today, Bishop even had the temerity to question whether the ABC was the right operator for the Australia Network, saying:

"My question is whether under a soft power diplomacy contract... is that the best use of taxpayers money to project a positive image into the region?"

I think most Australians would prefer the ABC exercising "soft-power" rather than the curt, abrasive, gaffe-prone, former asbestos corporation defender Julie Bishop.

And I'm damned sure Aussies in London would. I suspect a few may have called in sick yesterday. 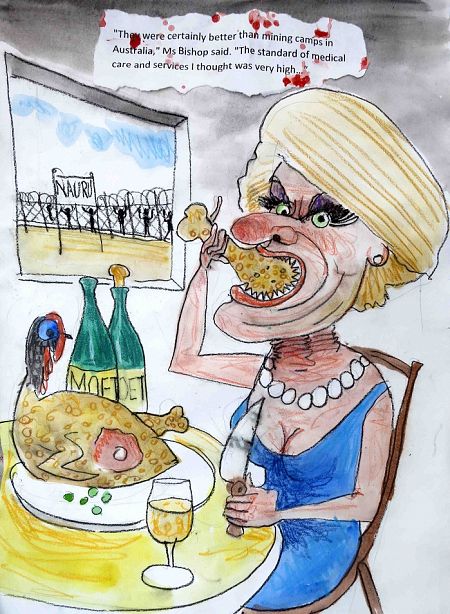