That is the question, whether 'tis nobler in the mind to suffer
The Slings and Arrows of outrageous Fortune,
Or to take Arms against a Sea of troubles.
(Hamlet: Act 3, Scene 1) 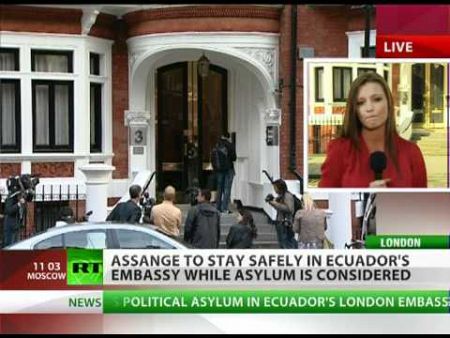 AS WE APPROACH day one hundred and twenty in this modern day Shakespearian tragedy of Assange versus The State, I can’t help but wonder that, with all the threats of death sentences, trumped up rape charges and assassination, even Macbeth would think: “things may have got a little out of hand here.”

As Julian Assange sits tucked away in the Ecuadorian Embassy in London he, like asylum seekers all over the world, must be asking the question — why me. If I can’t trust Western democracies, where do I go?

How has the pursuit of a world free from corruption and injustice led to this ― the virtual imprisonment of a middle aged man from Dandenong with nothing more to his name than a website?

Assange is not alone in this; we all pontificate from time to time about the hand life has dealt us. I vividly remember the day the school guidance counsellor asking me and my friends: “Where do you see yourself at 40?”

Not one of us had the vision to say: “Hopefully I will have annoyed the world’s largest superpower the point of wanting to assassinate me and, once that’s accomplished, I will wind up locked inside an Ecuadorian embassy somewhere.”

The long game the US is trying to play here is really quite simple — they just want to shut him down.

They can do this in a number of ways: discredit him; damage him to the point where nobody trusts him; lock him up, literally; or lock him up figuratively, by tying him up in two decades worth of legal proceedings as they go through each of the five hundred thousand cable breaches one at time with a tea break in between each one.

Either way they win.

One thing that is working out well for Uncle Sam in their battle against Assange is that he is now looking more rattled than he has for some time. This latest attempted move to Ecuador will, I predict, be just one of many twists.

If you look at the options now faced by Mr Assange, they are like comparing a Contiki tour of Kabul with two Contiki tours of Baghdad. Yes, you might survive, but this little junket is not going to be without some moments where you wished you had purchased travel insurance.

Every year, Transparency International releases a corruption perceptions index, where each country in the world is rated and ranked according to corruption and transparency.

If you compare the current options available to Assange – Britain, Australia, Sweden and Ecuador (or the BASE countries as I shall now call them) – his move seems to fly in the face of all reason and plays straight into the hands of Uncle Sam’s plan to discredit him.

Britain, his first option and current geographical location, is ranked 16th in the world out of 183 countries and 7.8 out of 10 ― so not too bad, even if the economy is stuffed.

Australia, my personal favourite, would give Assange the 8th best country in the world according to the index ― a regular lamb roast with mum and an 8.8 out of 10 overall.

Sweden, where he faces the only real charges against him, is the 4th best nation in the world when it comes to corruption and scores an impressive 9.3 out of 10.

On the surface of it, you may say “this is all looking good so far for Mr Assange with regards to getting a fair trial”. But where does he want to move to continue his Wikileaks efforts to fight global corruption and improve transparency?

So, even with a move to Ecuador, if he keeps doing what he has been doing to date, at some point it seems certain he’s going to fall out with the authorities.

While I don’t anticipate that Assange will meet the same fate as Macbeth, I do hope –as he gazes out over Shakespeare’s Globe from his window at the Ecuadorian embassy – he takes some time to consider this predicament.

What he really needs is a country with a high speed national broadband network and a commitment to free speech that is not afraid to challenge the international community to lift its game. If only such a country existed.