While Foreign Minister Julie Bishop worked hard and successfully to obtain the release of Peter Greste, FOI documents reveal the Australian Government has very deliberately "sat on its hands" in the case of Julian Assange. Kellie Tranter reports.

IN FEBRUARY 2016, the UN Working Group on Arbitrary Detention (WGAD) found that Julian Assange was arbitrarily detained by the Governments of Sweden and the United Kingdom. The Working Group recognised that Mr. Assange is entitled to his freedom of movement and to compensation. In November 2016, it rejected a challenge filed by the Uk regarding Assange, upholding its February ruling. Since then, silence has ensued.

“I have now read the report and I am seeking legal advice on its implications for Mr Assange, as an Australian citizen.”

‘... not seek to "resolve" Mr Assange’s case following the WGAD opinion, as we are unable to intervene in the due process of another country’s court proceedings or legal matters, and we have full confidence in the UK and Swedish judicial system.’ 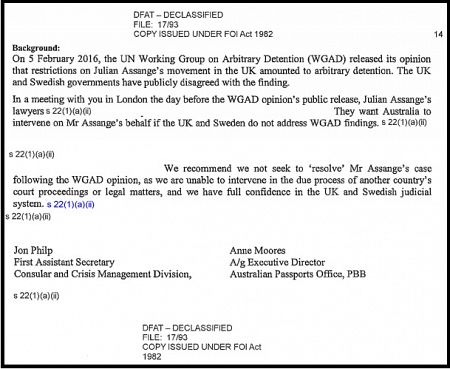 Of interest is the fact that, in the first FOI response, the ministerial submission was provided with both the Minister’s signature and the date redacted. This was queried by the author and, after numerous phone calls and emails, the same ministerial submission was provided with the minister’s signature and date and a covering email at pains to point out that it was not focussed on the outcome of the WGAD report.

Why bother redacting the minister’s signature and date from the ministerial submission? Is it because that, at that time, the Minister was publicly stating she would be seeking legal advice yet privately agreeing to a course of action before receiving that advice? One can only assume that the legal advice allegedly sought by Ms Bishop did not provide a contrary view to the recommendations made in the ministerial submission or Mr Assange’s legal team would have been informed. Instead, as I understand it, they have heard nothing.

In a letter to the author dated 7 April 2017 the Department of Foreign Affairs and Trade confirmed that the Minister sought and received legal advice on the implications of the findings of the WGAD in February 2016. The Department was not prepared to provide the dates that advice was sought and received nor confirmation of the Department from whom it was sourced. Consequently, a further freedom of information request has been issued and remains outstanding.

‘...Australian Government stands ready to provide Mr Assange with the same consular assistance it would give to any other Australian in the circumstances…’ 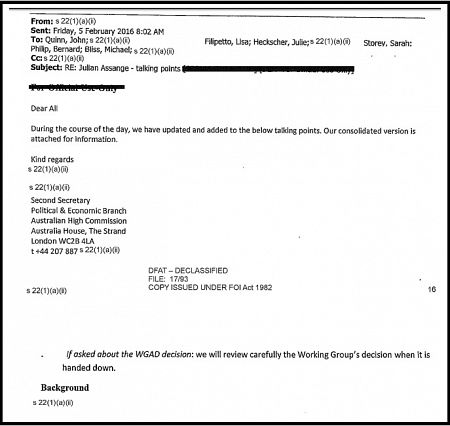 Is there – or has there ever been – an Australian in the same circumstances? Held in isolation for ten days, under house arrest for 500 days and in excess of three years in the Ecuadorian embassy. No real freedom, the subject of overt and covert surveillance and in fear of refoulement to the United States for publishing the truth. No right to be heard, no presumption of innocence and facing the prospect of indefinite detention?

Compare that with the case of journalist Peter Greste. Julie Bishop told Greste in an interview for the ABC’s Foreign Correspondent program that

“We have continued to make representations to the Egyptian authorities that your (re)trial should not have gone ahead and that if they insist on trialing you in absentia then you should have the opportunity to give your side of the story.”

“... spoke to [Egyptian] foreign minister [Sameh] Shoukry on July 16 and set out quite plainly Australia’s position: that we wanted you to be able to clear your name, that we would not accept the verdict as being evidence of your guilt, and that it would have ramifications for the relationship and for Egypt’s reputation more generally.”

Ms Bishop said she was conscious Australia had “very little political leverage” with Egypt, and so began “a very concerted campaign of advocacy”, which involved high-level diplomatic contacts with the United States, the European Union, the United Nations and countries in the Middle East.

Contrast this with Assange’s case, where the Australian Government sits on its hands instead of standing at the gates with the keys.

In the book Things that can and cannot be said, author Arundhati Roy wrote:

Looking at Julian Assange sitting across the table from me, pale and worn, without having had five minutes of sunshine on his skin for nine hundred days, but still refusing to disappear or capitulate the way his enemies would like him to, I smiled at the idea that nobody thinks of him as an Australian hero or an Australian traitor. To his enemies, Assange has betrayed much more than a country. He has betrayed the ideology of the ruling powers. For this, they hate him even more than they hate Edward Snowden. And that’s saying a lot.

Really? A man ostensibly facing rape allegations has the capacity to cause damage to Australia’s international relations?

The Australian Government’s treatment of Assange demonstrates that he is an Australian citizen whose government’s actions or inactivity in relation to the infringement of his rights are dictated by international policy considerations rather than his individual circumstances. How can consular support at the level provided to “ordinary Australians” – in marked contrast to that provided to Australians like Peter Greste – be adequate in those circumstances?

It is time for our government to “come clean” and explain the position it has taken with respect to Assange and why.

If it is staying out of the fray for fear of adverse international relations consequences – and realistically they would come from the United States more than the UK or Sweden – then it has a serious question to answer about where our rights as Australian citizens fall within the greater scheme.

Escape with an IA subscription today, from just $5.