John Howard: Lazarus with a vengeance

John Howard’s autobiography – Lazarus Rising – is a self serving account of the years he and Janette ran Australia single handedly. Barry Everingham comments.

JOHN HOWARD came into the Federal Parliament in 1974 and remained there in many roles until he became only the second serving Prime Minister to lose his seat in a federal election.

Howard shared with the late Bill McMahon a reputation for being divisive and untrustworthy and in his career he stopped at nothing to reach the top.

When he eventually became Opposition Leader after he deposed Andrew Peacock, the Liberals in the main shook their heads that the once great party founded by Robert Menzies had plunged to such depths of despair that he seemed the only current member they had.

How wrong that turned out to be – he help the top job for the second longest period and ran, along with his wife Janette, the Liberals with a rod of iron. 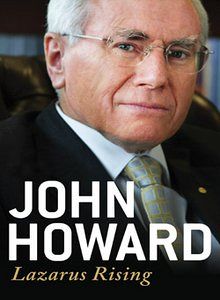 In tandem, they devised the terms of reference of a referendum on the subject of an Australian Republic. It was lost before it was held and the gloating was unbelievable.

They created a precedent by making Kirribilli House in Sydney their principal place of residence, hardly ever using The Lodge and costing the taxpayers hundreds of millions of dollars.

Howard refused to apologize to the Stolen Generation and scoffed at the Walk of Reconciliation undertaken by thousands of marchers over the Sydney Harbor Bridge.

He condoned the outrageous racist polices of Pauline Hanson saying she was entitled to her own opinions.

Perhaps the most egregious period of his Prime Ministership was his cringing to George W Bush and getting Australia involved in the invasion of Iraq, an act which has soured this country’s relations with the Arab world.

John Howard’s refusal to hand over to Peter Costello – and Costello’s lack of balls in not emulating Paul Keating who resigned from the Ministry when Hawke wouldn’t go – was the beginning of the end of Howard and the Liberals.

And now with the publication of his memoirs the Liberals will be policy frozen while they handle all the fallout from the derision the Government will heap on them.