When he read the moving tale of brave whistleblower Marco Bolano in the Herald on Saturday, Peter Wicks nearly choked on his cornflakes. Here he tells the real story of Jacksonville’s “good people”, including Kathy Jackson's astonishing activities just prior to the police raid on the HSU offices in May.

READING the Sydney Morning Herald on Saturday, a song came to mind: The Real Slim Shady.

Reading Kate McClymont write about the heroic Marco Bolano, the caped crusader against corruption at the Health Services Union, bravely taking on a monolith, nearly brought a tear to my eye. Nearly.

I had that damn Eminem song in my head:

The article in the paper told of a brave Marco Bolano blowing the whistle on Union corruption and suffers the slings and arrows of unfair condemnation as a result. It was related from the perspective of someone who was obviously not in any way biased — his partner Kylee Brehaut.

Here’s a taste of this unmitigated puff piece:

The decision to blow the whistle on the union's longtime boss Michael Williamson has had the most profound repercussions.

''I cannot even begin to list all the days and weeks over the past year that have felt like a living nightmare,'' said Ms Brehaut.

Most shocking to her has been the treatment dished out to the whistleblowers by fellow members of the union and senior Labor party figures.

This would be the same whistle that has been blown by Kathy Jackson, Michael Lawler, in the past, and now Marco Bolano has rolled up for his turn. I believe the only thing that is being blown here is smoke, and it is being blown out of their…. well, you can fill in the dots, there, I expect.

Here’s some more in the same vein:

Suddenly Mr Bolano was unemployed, his car, phone and laptop were gone, but the ordinary struggles of suburban life such as young children and a sizeable mortgage remained.

Would she do it again? Ms Brehaut pauses before answering, her voice wavering.

''We've always believed in doing the right thing, pretty much no matter what the cost, you had to follow the right path.

''Unfortunately for us, the age-old story of what happens to whistleblowers is once again unfolding …

''There is no tangible support and protection, let alone respect, for taking the hard road instead of the cowardly one.”

Some of you may remember my article that talked about some of the HSU members, like Maria. The people who work in the toughest conditions for the barest minimum of a wage.

Frankly, the hide this man, or his girlfriend, to talk about the "hard road". That is for members like Maria and others like her to talk about.

The cowardly road, it seems, is not the one where a thug gets his girlfriend to approach the media, and get all weepy about not being able to afford the millionaire lifestyle anymore — then casually dropping in raising her 2 daughters in a desperate plea for sympathy. What is it with these people and dropping their children into the mix, effectively using them as weapons?

Bolano, does have a mortgage, Kylee is right — allegedly a brand new one for over $1,000,000; not bad for a union man. I don’t think that will gain much sympathy from people like Maria, busting their guts for minimum wage, while Marco’s has gone up approximately 70 per cent according to the Temby report, as we reported last week.

Marco Bolano, as we all know, is the right hand man of Kathy Jackson. In the article, Kylee talks about bad things happening when good people do nothing, and I completely agree. We differ on our examples of good people however.

With that in mind, let's have a look at Kylee's "good people" of the HSU.

Kylee's partner, Marco Bolano, the hero of her story as told to the Fairfax press, is better known to us as the union thug.

Bolano has a reputation, and to say it doesn't fit the mould of the heroic whistleblower is an understatement.

Actions speak louder than words — even the words of a delusional, yet dedicated girlfriend. In short, Bolano's actions are infamous amongst union members.

There are many clips on YouTube of Bolano in action; unfortunately, rather than blowing whistles, he is brawling with members.

The message seems clear, young or old, male or female, Bolano doesn't mind lashing out. The courage Kylee speaks of really starts to shine through when he acts the union heavy with a female union member — a brave man indeed.

In 2011, at a HSU council meeting on the 13th of November, Bolano again showed us his sensitive side. Not happy with the way things were running, Bolano thought a Nazi salute was the appropriate and intelligent way to deal with his issues – knowing that one of those council members was German.

The next day, Bolano again showed remarkable sensitivity, when attendees at a conference were asked to stand for a minutes silence in remembrance of those who had passed away. All of the several hundred attendees stood in silence; all except one, allegedly.

Bolano allegedly decided respect for the dead didn't matter, that it was far more important to have a dummy spit at Steve Pollard — shuffling papers about angrily.

Later, at the same meeting, Bolano allegedly constantly interrupted members, not just by butting in, but screaming abuse at them, throwing insults, and being the bully boy for which he is notorious at the HSU. 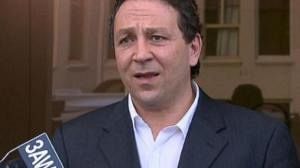 At the start of one Convention, the Executive were to take their place on the stage. As usual, seats were apparently allocated on the stage to fit everyone in. These included the president, who was the chair, the time keeper, the vice president’s general secretary, as well as the executive president, Kathy Jackson, and two deputy general secretary's — Bolano and one acting in the role, Gerard Hayes.

Bolano found he was not allocated a seat next to Jackson and, like in some scene reminiscent of a WWF extravaganza, or a blooper moment from Romper Room, Bolano in front of a Hall full of delegates ripped up the name tag and threw it over the stage towards the delegates and took up the seat next to Jackson — presumably so he could hear her Instructions. Bolano doesn’t respond as well to string pulling from a distance, apparently.

Marco Bolano. One of the good people.

This leads us to the next white knight in the army battling union corruption ever so bravely...

Looking at the lady (and I use the term extremely loosely) who pulls Bolano's strings, Kathy Jackson, we see someone else who was clearly out of town when class was being given out.

I will not go into the vast amounts of money she faces allegations of fleecing from the nations poorest workers. Details of those allegations can be found on Independent Australia’s Jacksonville page, but be warned, there are reams and reams to go through. This is the woman who spent over $176,000 of Union members’ money on credit cards in under one year, you may remember.

Below are some of the transactions from the HSU 3 Branch cheque account in a summary sheet: 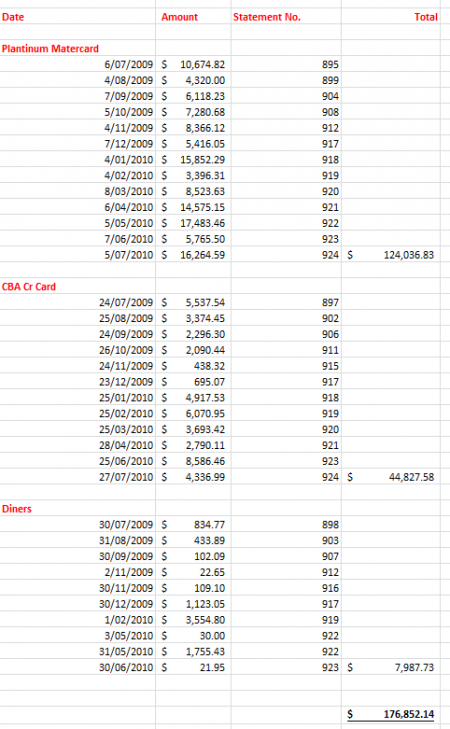 Seeing as though we are looking at those Kylee calls "good people", I thought we should take a look at how Kathy treats staff, union delegates, her husband (now ex-husband) and her fiancé. We will start with staff.

I'm sure most of you would have seen the "surprise" police raid at the HSU offices in Sydney. You may also remember that the press seemed to know which of those who worked in the skyscraper were HSU staff, they knew who to film as they waited outside the buildings entrance with Jackson, who happened to arrive in town the day before from Melbourne.

Below is a link to a letter of complaint, ignored by Jackson, regarding her actions the day before the raid. 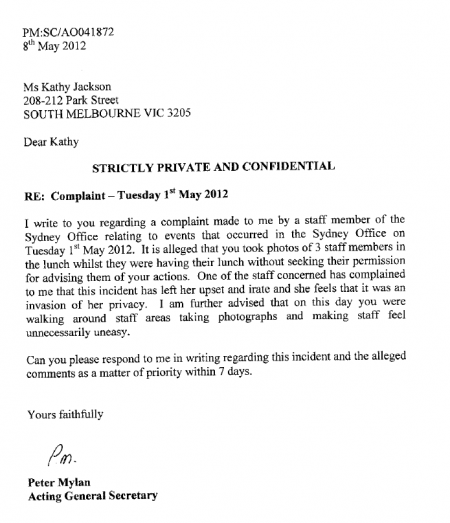 To try and secretly photograph staff is reprehensible. To pass photographs of your colleagues to the press, as Jackson is alleged to have done to allow the media to identify HSU staff, is worse than disgraceful.

In Jacksonville, these are the “Good People” apparently.

I bet Sir Peter Lawler, the good Catholic man, with a solid background and proud history, can’t wait to have Kathy Jackson as part of the esteemed Lawler family. He must be absolutely chuffed to bits.

Before Marco goes and get’s his cranky hat on, and starts flapping his arms about like Kathy Jackson at a Federal Court hearing, I should point something out. By pointing these things out, I am in no way attempting to say that Michael Williamson is any sort of saint, legend, do-gooder, or noble being. It is not a comment on anybody other than those your girlfriend chose to refer to as the “good people”.

The truly good people are the poor members who have put up with the antics and alleged rorting of their union by the likes of Bolano, the Jackson’s and Michael Williamson.

These are the good people who are going to throw you out on your arse come election time.

Good luck with that million dollar mortgage, Marco, we hope they pay well at McDonalds.

[This is an abridged version of a longer piece on Peter Wicks' blog Wixxyleaks and includes other astonishing revelations about Kathy Jackson's indiscreet conduct. You can follow Peter Wicks on Twitter @madwixxy. ]