If Rupert Murdoch wins in 2013

Rodney E. Lever provides a chilling preview of what will happen if Rupert Murdoch gets his wish and Tony Abbott & Co win the Federal election next year. 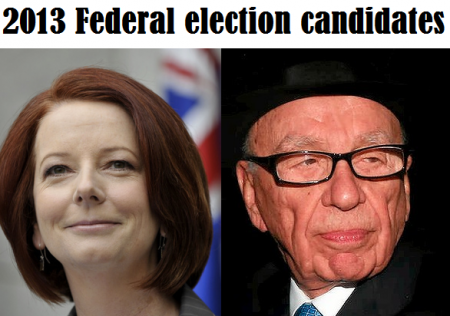 LET’S JUST PUT our thinking caps on for a minute and imagine what Australia would be like if Rupert Murdoch gets his wish and in 2013 installs a coalition government led by Tony Abbott, Joe Hockey, Julie Bishop and Mal Brough.

Everything they do will be according to the wishes of a man who lives in a $100 million dollar Park Avenue penthouse in New York city and spends most of his working days in a skyscraper office building with a telephone clamped to his ear directing the activities of his 50,000 employees. That is, when he is not encircling the globe in his private fleet of Boeing jets.

We can expect that the Coalition team will have some attractive policies to present to the voters before the 2013 election, but they will be discarded and forgotten immediately the votes are counted because they will be too busy celebrating and getting their marching orders from the old man in New York.

Then the new policies will click in and, bearing in mind the record of previous Liberal governments, we can expect the following changes — extracted from reading recent editions of The Australian and past activities of News Corporation.

Firstly, there will be no legislation to inhibit the absolute freedom of the press in Australia. They will be able to print any damn thing they want. Truth will be shredded and thrown out the window, personal privacy of targeted individuals will be rampantly invaded and their characters destroyed.

Murdoch will insist on selling the ABC. He has hated it all his life. In the post-Whitlam era, he had Malcolm Fraser and John Howard slash government funding of the ABC and change the management. But they made such a hash of it and the public response was so savage that the ABC was saved. This time it will be a quick privatisation sale, like the Commonwealth Bank and Telstra. The ABC will be commercialised with ads every 25 seconds. Tony Abbott will love this. He will be able to wipe the Kerry O’Brien tapes. Mal Brough will be able to wipe Ashby.

Australia will never again abstain in a U.S. promoted vote in the United Nations. Australia will return to lockstep the US in international affairs. We will support Israel in every step of its battle to survive in the new post-empire era of the Middle East.

Foxtel-Sky will expand its coverage to Asian countries, replacing the ABC’s Australian service, while Australia’s existing free channel services will struggle to survive — and, one by one, will go down the gurgler.

There will be major changes to work practices in Australia including staggered holiday periods, no longer just the Easter and Christmas family celebrations. Working hours will be longer and harsher. The crushing of small business will accelerate, with more giant corporations swamping the market — perhaps even Walmart.

Wages will slowly decrease and taxes on families will increase. This is inevitable with so called “Liberal” governments, which are not liberal at all. The GST was once described by a British prime minister as

“...the perfect tax on which the public will pay for a variety of goods without ever being aware that they are paying a tax.”

The GST will certainly increase. It has become an unnecessary obsession with certain economic writers and some politicians of “liberal” mentality.

As mentioned earlier, the above is from a study of recent editions of The Australian and past activities of News Corp. They all represent an unnecessary return to the past and greater  hardship in the future.