Proponents of the anti-lockdown movement have learnt the most effective ways to make money out of people's gullibility, writes Tom Tanuki.

THERE ARE A HUNDRED anti-lockdown fundraisers doing the rounds at any moment. They constantly make my head hurt. How can anyone dump their money into this rubbish, I ask myself, before having to ask it again, always a little more despondently. They stand as an enduring reminder of the central financial imperative of the “freedom movement”. The movement bears an enormous capacity to generate income for its core parade of martyr figures.

Are those figureheads raising money for a cause, or for themselves? Are they applying the cash to the cause they said it was for? If not, what else is in it for them? These questions are always worth asking. And the answer: it depends.

Fundraiser #1: Reignite Democracy Australia (RDA) founder Monica Smit is charged with incitement for her ongoing role in promoting anti-lockdown rallies. Her bail conditions are typically onerous: don’t post, don’t attend rallies, don’t wear a mask (lol). But they aren’t extraordinary conditions. Ask any seasoned activist. She refuses them regardless, choosing to remain in remand rather than fight the conditions after release. Instead, her team launches a hysterical campaign of howling about the conditions and martyring Monica.

‘Democracy was arrested on the 31st and Democracy will be on trial’, screeches one RDA meme! She is compared by her parents to Julian Assange! RDA posts an illustration of Monica looking like the Statue of Liberty! Apparently, Monica is now writing a book in gaol, like Nelson Mandela! They even have the nerve to straight-up pretend she’s the “first political prisoner on Australian soil”!

Cheeky. This content is pretty typical for people in the anti-lockdown movement, who never shy away from a bit of corny overstep. But the point to all their howling is another fundraiser, of course. RDA raised over $250,000 for Monica after only a week or two.  And counting.

But then her parents recorded a video for the RDA page. They confirm – perhaps carelessly – that the legal team is working pro bono.

Monica’s partner, fellow RDA figurehead Morgan Jonas, realised this incongruity was being noticed. He says there are more people on the legal team who aren’t working for free. Oh, cool! Are they the ones who will need a quarter of a million dollars to fight a regular incitement charge?

Fundraiser #2: A fitness influencer in Queensland called Matt Fox has over 350,000 followers on Instagram. He doesn’t like that playground use is restricted temporarily due to the coronavirus. So Matt goes to a playground, tears a restriction sign off and throws it in a bin. He films himself. He is charged by police. So naturally, Matt then sets up a GoFundMe for himself.

‘FIGHTING FOR OUR KIDS!’, it’s called. It’s a bit over-the-top because it’s actually just so you can pay for Matt’s legal fees, in case he eventually incurs some. Incredibly, it’s raised $7,000 already. All because Matt threw a sign in a bin. Gosh, if I was a kid right now, I’d feel so fought for!

Those are my two favourite fundraisers. There are always new ones, but I should clarify that not all anti-lockdown business is about big fundraisers.

A month ago, I looked at the owners of Sunshine Coast business New Earth Café, who refused to abide by mask mandates. They confronted police with conspiracist “common law” get-out-of-gaol rhetoric (which didn’t work — they were arrested). They did so with support from a seasoned anti-lockdown figurehead named Zev Freeman. Anyway, after I wrote about Zev, I saw a private invite to a workshop he was running on the Sunshine Coast.

Over two weekend evening sessions, Zev’s workshop gives you documents to use to “combat” coronavirus restrictions like QR code sign-ins and mask restrictions. (The documents are basically sovereign citizen nonsense.) The invite I saw assured attendees that Zev’s knowledge is ‘greater than virtually all lawyers’. Gosh!

Only $200 for two 2.5-hour weekend sessions. This is Zev’s way of monetising the “freedom movement”: charge saps to listen to you pass conspiracist rubbish on. He tours around local venues in Queensland, with invites to his sessions distributed privately by local COVID-denialist networks.

Other conspiracist figureheads, such as Dave Oneegs and Tom Barnett, dabble in the workshop game too — while also selling merch. They sell anti-lockdown-themed shirts which talk about the Nuremberg Code and other stuff they don’t know anything about, going for $55 a pop. They pocket around $30 per shirt.

Others still use the movement to help promote the sale of Isagenix products, MLMs, clothing lines, books, crystals and more. Loitering around the Telegram groups that make up this movement, in fact, I’m constantly struck by the amount of snake oil selling that occurs among group members on a day-to-day basis. The predatory ideology of MLM-style wellness sharpers really informs this movement.

Still, the biggest revenue-raising stunts remain the fundraisers. They’ve raised millions. It’s hard to say how much of that money has actually contributed to the ridiculous sells promised by many anti-lockdown fundraiser promotions. For example, I don’t know how the RDA fundraiser will turn out, but I doubt that it will “save democracy”. If, indeed, democracy ever needed saving from Monica Smit’s bail conditions.

Avi Yemini and Rebel News run some of the biggest rolling fundraisers. Avi will fundraise for anything. He begged for money so his security guard could accompany him at rallies — even though he’d already been doing that for years. He asked for funds to fight fines for breaching restrictions — even though you could do that yourself simply by penning an appeal on the fine and posting it back. Indeed, many of those fines were summarily dismissed last year, meaning no legal costs were ever incurred. Where’d the money go?

Another still was to support a legal challenge to the validity of lockdowns. That alone raised over $100,000 — I assume many of the other Rebel fundraisers performed similarly. (The private Canadian fundraiser site doesn’t give us the numbers and neither will Avi. We don’t even know how much expenditure has occurred from this fundraising pool.)

The challenge case failed in the Supreme Court. Interestingly, another anti-lockdown figure, Jacquie Dundee, regularly insists that Avi’s legal team launched a sham legal case deliberately designed to fail, just to collect the money. She has even chased him down at anti-lockdown rallies to confront him about it; his usual response is to walk away from her very quickly. 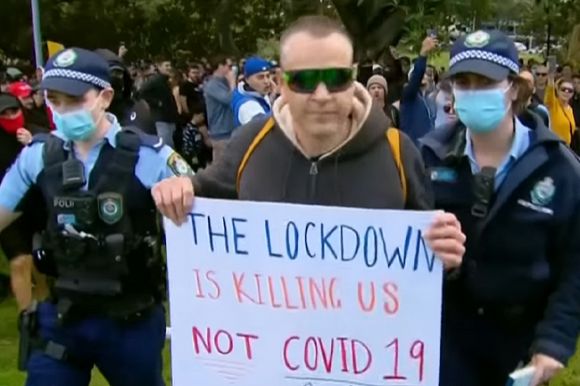 Anti-lockdown supporters are trying to use the idea of common law as an excuse to disobey COVID-19 safety measures.

Is Jacquie right? What happens to all that money after it goes to Canada? Who knows.

Admittedly, some fundraisers may not be all about the money. For example, Matt Fox’s fundraiser says any excess income will go to a charity. RDA promises that any unused revenue from the $250,000+ will be returned to donors. Let’s assume they’re good for it and not just hoping we all forget. If the quarter-million isn’t for legal action and it isn’t lining someone’s bank balance, what’s it for?

The behavioural economics of fundraisers, even in the fringe political space, suggest that sinking funds into a political cause increases loyalty. The old cognitive bias of the sunk cost fallacy. Sign-stealer Matt Fox is a fitness influencer. I note his fundraiser is liberally peppered with references to his Instagram page — I imagine donors will be very loyal to Matt’s brand after chucking money in for his fundraiser. That may well be the aim.

RDA, meanwhile, intend to grow as a foundling fringe political party. Their project is developing the would-be personality cult of Monica Smit. (And she’s not a big personality.) Having her remain in remand when she could accept her bail conditions and fight them outside is helpful to their image. It lays the groundwork for a contrived political martyrdom for her that would benefit RDA long after she’s released. RDA could easily return the hundreds of thousands of dollars but still benefit; martyring Monica over a relatively standard charge will be a huge boost to their fringe political capital.

The anti-lockdown movement is an affluent, well-oiled fundraising machine. The money’s there for the taking, whether it’s for generating political capital, a regular gig, or a huge Canadian payday. They’ve got cash to burn, conspiracist fervour and the intense desire to not have been wrong all this time. Excellent ingredients for a fundraising base, it seems. 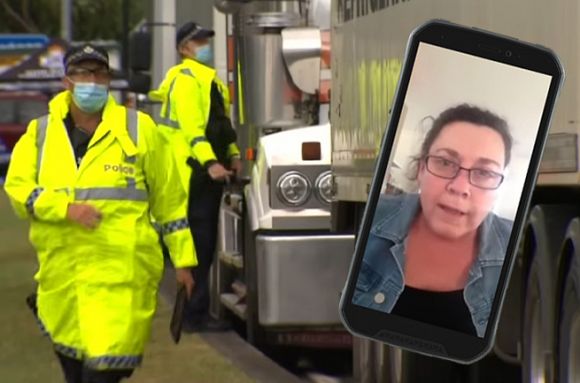