Joe Hockey would find a better solution to Australia's economic problems by looking at the Japan of today, rather than the England of thirty years ago, writes Andrew Warrilow.

WITH HIS LAYING WASTE of troubled industries, predicted cuts to fiscal spending and all the talk of ending ‘entitlement’, the new Abbott-Hockey era is starting to feel more like Margaret Thatcher’s Britain of the early 1980s rather than Australia in the 21st Century.

Holden could be our northern shipyards and SPC Ardmona our coal mines. Can we soon expect a return to legwarmers, cut-off gloves and mohawks? Is a new series of The Young Ones on the way?

Whatever the case, at least in Government, it’s back to the future with a vengeance.

Joe Hockey’s admiration for the Iron Lady is no secret; he recently finished reading her bio and has peppered many a speech with her quotes, but are 1980s solutions appropriate for the economic challenges of today?

To answer this question, let’s first look at how Australia and the United Kingdom of the 1980s compare economically.

The United Kingdom which Margaret Thatcher’s government inherited comprised a large, inefficient manufacturing sector making up almost 20% of GDP. Inflation was rampant, inflaming the industrial relations situation and causing instability. The deficit in public spending was running at around 6% of GDP and growing. There was mood in the country that something had to be done.

Rather than seek to rehabilitate the body of the ‘sick man of Europe’, Thatcher chose to excise those parts from the body which were diseased so as to save the body as a whole. Uncompetitive industries were closed down with relentless abandon. Unemployment skyrocketed, reaching over 3 million people in 1983. Eventually, apparent vindication of Thatcher’s policies came through a relaxation of monetary policy, creating economic growth to soak up the pool of unemployed.

Australia in the 21st century has already lost much of its industrial base. Manufacturing accounts for only 7% of GDP – one of the lowest rates in the developed world – and falling. Our public service sector is relatively small and likewise our public debt. Inflation is under control. The UK of the early 1980s and the Australia of the 21st century are in actual fact two very different economies. The nation currently runs a small current account deficit, which is expected to improve in the years ahead, but our trade performance is very heavily dependent on the continuing economic success of China. We have all our economic eggs in one basket.

The collapse of the United States' economy in 2008 was the final nail in the coffin of a world dominated by the monetarist economics adopted by leaders such as Margaret Thatcher. This has left the economies of most of the developed world with huge private debt, a hollowed-out industrial base, asset inflation through excessive speculation, anaemic economic growth and a younger generation with few prospects of obtaining decent employment or home ownership. We have entered a period referred to as ‘secular stagnation’.

So, how does Joe Hockey’s budget address these issues of our time?

If Joe Hockey plans to continue to destroy the remnants of manufacturing, crush the public service, slash welfare and otherwise deflate the economy, he will not have the lever of easy money to eventually get us out of the hole as did Margaret Thatcher. He will needlessly smash consumer confidence and create a recession which, if it gathers momentum, could adversely impact on property prices and end up being very, very nasty indeed.

In any case, in indulging in his Thatcherite fantasy, Joe Hockey is applying the wrong solution to the wrong problem at the wrong time.

The greatest goal for policy makers in our time is restoring the path to growth. An easy monetary policy is no longer capable of providing stimulus and further loosening will merely serve to further inflate asset prices.

In Japan, Prime Minister Shinzō Abe is finally managing to re-inflate the economy there by means of a shock burst of monetary and fiscal stimulus, designed to jolt the economy out of its torpor much as the advent of World War II gave the world the stimulus it needed to pull itself out of the Great Depression. The big news is that ‘Abenomics’ is starting to work and success in Japan would change the economic reality everywhere. It would be the end of the economics of gloom. Well, this time around anyway.

Considering Australia’s low level of public debt, our insufficient investment in infrastructure of recent decades and growing unemployment problem, perhaps Hockey could find the solution to our economy’s problems by looking a little closer to home in the Tokyo of today, rather than the London of thirty years ago. 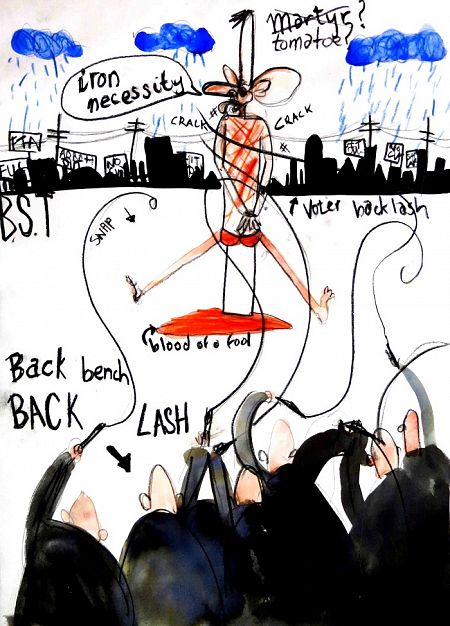 Labor and the 'climate change election'

22 May 2019, 4:30pm We were told time and time again throughout the recent Federal Election campaign ...

Trump, the death of 'free trade' and the rise of bilateral trade agreements