ECONOMISTS have been saying they thought Treasurer Joe Hockey's claims of a "credible path back to surplus” involved some rather heroic projections, particularly around GDP growth.

This analysis has been further confirmed, with Victoria University economic forecasts released in Melbourne this morning showing that not only are the Abbott Government’s growth forecasts far too optimistic, but that Australia’s living standards have peaked and look set to decline over the next decade.

The paper blows a gaping hole in Treasurer Joe Hockey’s claims of Budget repair, saying it will take

‘… an unlikely combination of strong productivity growth and falling real wages to achieve the forecasts in the Economic Outlook accompanying the latest federal government budget.’

It labels the treasurer’s productivity growth estimates as unrealistic:

‘GDP growth is projected in the latest government Economic Outlook to average 3.25 per cent over the coming four years.  In order to achieve this growth rate – blandly noted in the budget papers as a “return to trend” – modelling at Victoria University’s Centre of Policy Studies (CoPS) finds that total factor productivity growth will need to return to its heyday of the 1990s, when it added an average of more than 1 percentage point to GDP growth every year.’ 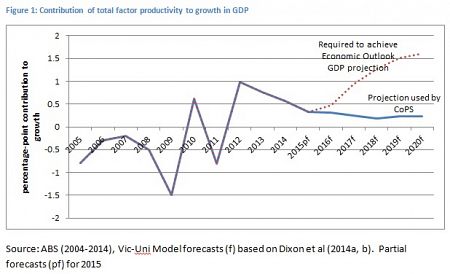 In addition, Dr Dixon said that models show that even with the increase in GDP predicted by the Government, for unemployment to fall to the levels predicted, workers’ real wages would need to fall by a full per cent over the next five years.

“The budget outlook anticipates unemployment will drop from its present 6.2 per cent to 5 per cent by 2020.  This would give GDP an additional kick along from the eventual return to work of around 150,000 currently unemployed workers.

“But for the economy to absorb these workers as the terms of trade continue to fall, even under the government’s optimistic productivity scenario, our modelling shows real wages would need to fall by 0.2 per cent each year for the next five years.

“Under a more sober assessment of productivity growth, a reduction in unemployment will be possible only if there is a sustained fall in real wages, undoing the last five years of wage growth.” 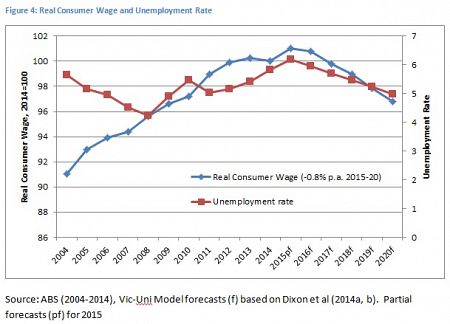 Dr Dixon said a less enthusiastic projection for future growth in productivity, more in line with recent averages in the developed world, adds just 0.3 per cent to annual growth.

“Along with reasonable forecasts for the other ingredients of GDP growth – labour and capital – this would yield GDP growth averaging 2.25 per cent over the coming four years.”

The modelling also painted a gloomy picture for Australia’s living standards, with household disposable income set to fall by 3 per cent over the next five years.

‘Household disposable incomes, already impacted by the weak growth in real incomes, will be eroded further as the government gradually adds more than 1 percent of GDP to its revenue collection by 2020. This additional demand on household budgets will leave households with reduced real disposable income per capita.  As a result, household consumption per capita will fall by an average of 0.6 per cent per annum.’ 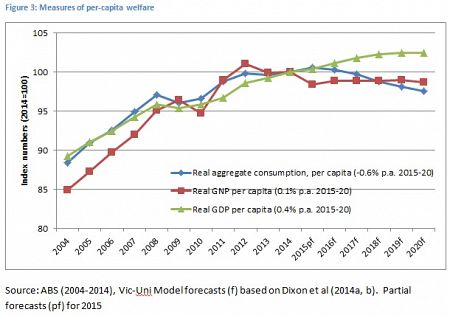 A summary of Dr Dixon’s analysis may be found here. You can follow David Donovan on Twitter @davrosz.

#businessnews: Joe Hockey may call me a clown, but GDP growth hasn't been 'terrific' http://t.co/sxRLwqDEtE