Iain Dooley discusses the problem the Turnbull Government has created for itself by setting the unemployment rate through fiscal policy when it has the ability to provide jobs for all its citizens.

'First the boats, now the bludgers!', the 13 July 2015 headline announced on the cover of the Daily Telegraph.

The two biggest enemies of the state, defeated by one heroic minister (can he sort out sharks and terrorists next?!).

No wonder he has such a cool nickname.

Has a nice ring to it.

But I don’t really think he’s done a good job of this at all!

ScoMo has been trying to rout these welfare cheats and bludgers for the past couple of years, and all I ever see are headlines about how GOD DAMNED MANY THERE ARE!!

ScoMo, I don’t care how cool your nickname is, I’m coming for you.

And not just you, I’ve also got a strong message for the welfare cheats all over Australia kicking their feet up below the poverty line and spending up big on free-to-air television and tap water.

I have a shocking plan that will expose every last welfare rorter, dole bludger, leaner, shirker, NEET and layabout — and no-one can’t escape this one. 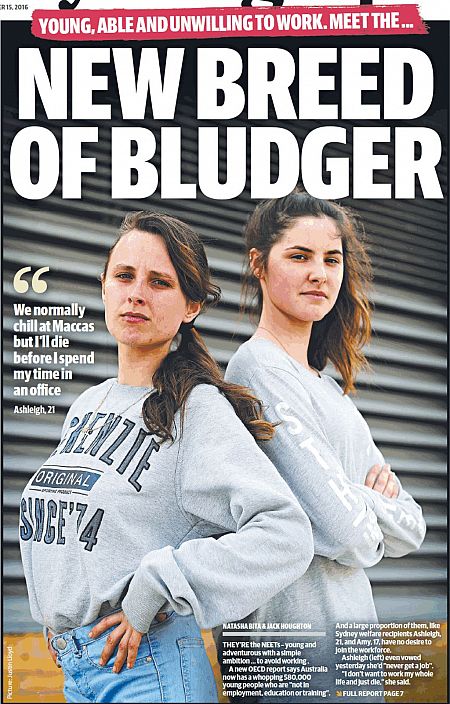 A NEET or neet is a young person who is "Not in Education, Employment, or Training".

The Job Guarantee is a federal program that provides sufficient funding to local communities (either through existing councils, through specially designed set of departments and organisations, or through non-profit and social entrepreneurship sectors), to employ at a socially inclusive minimum wage anyone who is willing to work but unable to find work in the private sector.

These jobs are guaranteed to be within the local area (no 90 minute travel time) and the jobs are fit to the capabilities of the workers, not the other way around.

By definition, then, if there is no work for you to do you are eligible for another social security payment such as disability support or aged pension.

Why have a Job Guarantee?

The closest historical example we have of a Job Guarantee was the Jefes program in Argentina, where the community and the unemployed workers themselves took part in proposing the projects they would work on. Here is a video presentation from Professor Pavlina Tcherneva on the Jefes program:

As Pavlina Tcherneva discusses, the Jefes program provided important fiscal stimulus when the Argentine economy was weak and as growth returned many of those employed by the Jefes program transitioned to employment in the private sector.

Since they were no longer employed by direct Federal Government spending, this reduced the fiscal stimulus and thus prevented inflationary effects from the Government over-spending.

It is this counter cyclical economic effect, in addition to the social benefits of helping communities organise to do meaningful work, that makes a Job Guarantee a superior way of delivering a basic income guarantee to all citizens.

What about the dole bludgers?

As Levy Institute economist Randall Wray says, let’s offer meaningful work contributing to society at a living wage to anybody who wants to work, then see who’s left.

The Radical Imagination: Imagining Economics in an Age of Stein, Clinton , Trump or Johnson with Professor Randall Wray.

In Australia, a socially inclusive minimum wage is probably around the $30k-$35k mark (that’s for the economists to figure out), so we just leave the dole, where it is an offer everyone the chance to be employed at nearly double the rate.

What we will soon rediscover in this country is that voluntary unemployment BARELY exists.

How can I be so sure? Because when work is available, people are employed. During the period when our government had a full employment policy, the unemployment rate rarely went above 2% (which economists call “frictional unemployment” or sometimes “wait unemployment”, that is people in between jobs but not long term unemployed). 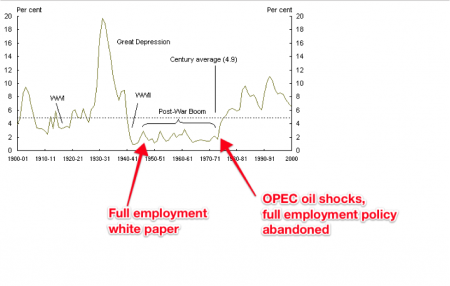 I talk to people about this all the time and they come up with various reasons why they think people are unemployed more now than they were then: technology, laziness, immigration (yes!! the immigrants will simultaneous take your job and be unemployed!! Magical, magical immigrants!) but look at how sharply unemployment dropped and rose with government policy.

Did we have a drop in productivity because of the war that lead to more jobs? Did we have less technology after WWII? (hint: no, we didn’t) Did we get all technological in the late 1970s? Did everyone all of a sudden say, collectively “screw this” and stop working? Did Australia suddenly fill up with lazy immigrants that simultaneously took everyone’s jobs in the late 70s?

No, none of those things are true. What happened is that our Government changed its policy. The above graph is incontrovertible proof that the Government sets the unemployment rate through fiscal policy and that only the Government has the ability to provide jobs for all its citizens.

Is it not the most cruel irony then, when the Government demonises the welfare recipients that it has created?

Iain Dooley is the co-founder of the Australian Employment Party. You can follow him on Twitter @iaindooley.

'The gov should always #spend to maintain #fullemployment'@iaindooley @independentaus https://t.co/zQ7vtgw106https://t.co/o50wavKysy

17 December 2016, 6:30am Iain Dooley discusses his 'shocking plan' for the Turnbull Government to provide ...

We're under siege from a new breed of intellectual: The pseudo academic

1 December 2016, 6:30am Iain Dooley shows us how to deal with the paranoid delusional ravings of pseudo ...
Join the conversation
comments powered by Disqus
News updates