Dick Smith is living up to his name by pledging support for Pauline Hanson's One Nation.

It’s a sad state of affairs, not only because by choosing to support Pauline Hanson and her motley crew of madmen, Smith is also supporting a suite of the worst policies in Australian politics, but because the strategy of stopping immigration to avoid the problems of overpopulation, is the opposite of what we need to do.

Global overpopulation is not a problem that can be solved in Australia without being solved elsewhere.

The Henny Pennys in the anti-immigration camp cry out about how the world is stretched to breaking point and resources can’t possibly feed, water, clothe and shelter everyone.

Meanwhile, more than half of the world’s food gets thrown away and 40 per cent of water use in Europe is wasted because of leaky pipes.

The First World trying to pull the ladder up behind them is the equivalent of The Simpsons' character Mr Burns denying Smithers a spot in the escape pod because he likes to put his feet up. 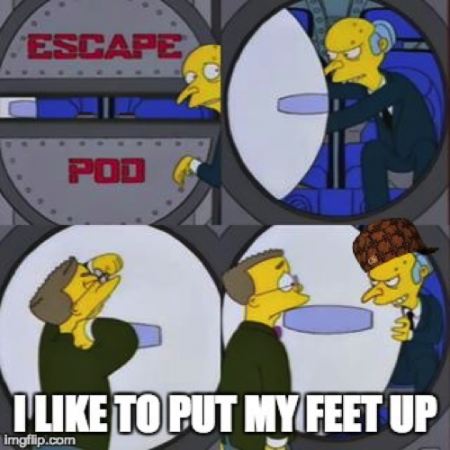 We have everything we need right now to support every single person on the planet and more. We should be focussing our innovation efforts on reclaiming deserts and low impact farming techniques rather than Social Local Mobile apps to increase retail sales.

Rather than bombing our neighbours into submission or hoping they die off before they notice, we’re living on a completely empty continent, we should be increasing immigration and implementing programmes to reclaim arid land and make it productive. This is a huge opportunity for that hallowed goal of “jobs and growth”.

There is labour required of all skill levels and room for everyone to get involved in this type of work — and we simply cannot do it alone.

By focussing not on excluding people but on bringing them here to help us in this massive project, we achieve a few things.

Firstly, we take people from less developed nations with less empowerment for women, into a nation with more empowered women, which lowers overall fertility rates and has the best potential for slowing population growth. In recent years, this empowerment of women as a mechanism for population control has seen an increased focus.

Secondly, we establish this as a model for economic growth, while stabilising population growth and for providing effective, equitable distribution of food and water resources, that can be an example to the rest of the world.

It is true that we need to slow global population growth, but we need to do it as an inclusive effort.

We are a planet of wasters. We waste food, water, energy and human capital — leaving billions to rot in stateless refugee camps, poverty and unemployment.

Let’s change the narrative from one of exclusion and division – spruiked by Dick Smith and One Nation – to one of inclusion and unity. The only chance we have for survival, in any meaningful sense of the word, is to work together, not only as a nation but as a planet.

Let’s get to work!

Iain Dooley is the co-founder of the Australian Employment Party. You can follow him on Twitter @iaindooley.

17 December 2016, 6:30am Iain Dooley discusses his 'shocking plan' for the Turnbull Government to provide ...

We're under siege from a new breed of intellectual: The pseudo academic

1 December 2016, 6:30am Iain Dooley shows us how to deal with the paranoid delusional ravings of pseudo ...
Join the conversation
comments powered by Disqus
News updates