A new poll shows Australians are "bleating all they want" for the Turnbull Government to close the camps and let asylum seekers stay, reports GetUp's Matthew Phillips.

IMMIGRATION MINISTER Peter Dutton has taken a position on the future of those he continues to detain in offshore camps and it’s not only abusive, it’s unpopular.

Following last week’s meeting with his Papuan New Guinean counterpart, Peter O’Neill, Prime Minister Turnbull spoke of finding durable solutions for those unable to go to the United States under the resettlement arrangement.

Within days, Peter Dutton appeared to contradict him, insisting that this same group would have to permanently resettle in PNG — a place that doctors, other health care professionals and the U.N. Refugee Agency (UNHCR) have repeatedly made clear is unsafe for even temporary integration for refugees.

This weekend saw tens of thousands marching in cities across Australia in Palm Sunday rallies, calling for those detained on Manus and Nauru to be brought to Australia. And a new ReachTEL poll commissioned by GetUp shows that the majority of Australians believe that those in offshore detention should be brought to Australia while a long-term solution can be found. 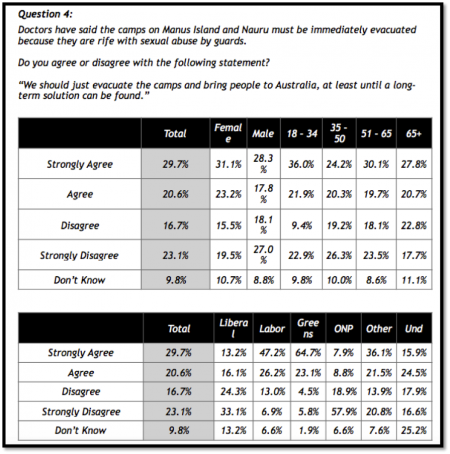 (ReachTEL conducted a survey of 1,901 residents across households in Australia during the evening of 24 March 2017.) Reachtel poll results (source: GetUp!)

The outcome of the U.S. resettlement arrangement is still in doubt, but at best there will be a sizeable number of people left behind. It appears the Government has no plan for these people and time is fast running out. In October, the illegal facility on Manus Island will be closed and the contractor that operates the detention facilities on Nauru will walk away.

By insisting that those remaining on Manus resettle in PNG, Peter Dutton is effectively forcing people that sought Australia’s help to live indefinitely in unsafe conditions. Yesterday’s Reachtel poll reveals that the Immigration Minister has lost public support for this abusive position. People realise that we can’t trust President Trump to resolve the situation on Manus Island and Nauru but we can – and should – bring them here to safety. 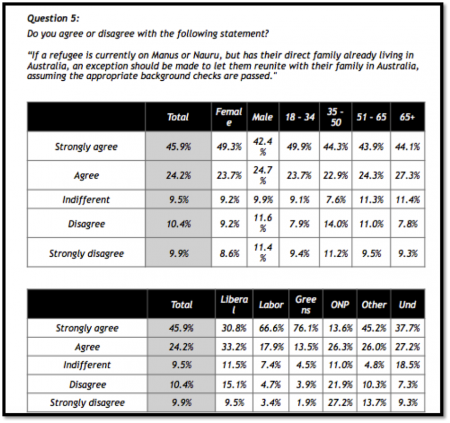 ReachTEL conducted a survey of 1,901 residents across households in Australia during the evening of 24 March 2017. (Source: GetUp!)

It’s not up to Peter Dutton to defy the public and the Prime Minister. The Turnbull Government must act to provide safety for all those currently held on Manus Island and Nauru —  and that must include reuniting families in Australia so that they can rebuild their lives together.

Dutton: refugees from Manus, Nauru will come to Australia "over my dead body".

The TPP: The dirtiest, most dangerous trade deal you've probably never heard of

7 February 2015, 4:00pm The secretive Trans Pacific Partnership is reportedly close to being finalised ...