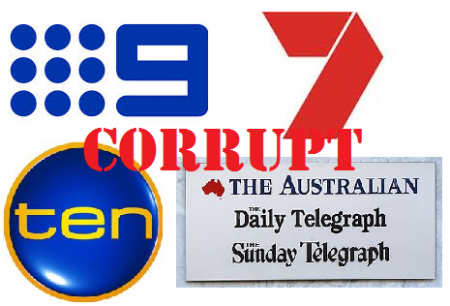 I'm just off the phone after dozens of radio interviews. Our member-funded ad calling out Murdoch's bias is causing quite a fuss.

Already, 830,000 people have seen the ad on air or online — but now all three major TV networks are pulling it off air and refusing to run it. Some of the network representatives told us directly: they're not running the ad because they don't want to criticise Rupert Murdoch.

We've filed an official complaint with the Australian Competition and Consumer Commission, but we can't wait for a ruling to take our next step. We have to get this message out, right now.

So if the commercial channels are slamming the door we'll just go around them ― and go bigger.

If our proposed TV ads had gone through, we would have reached an additional 500,000 TV viewers by the election. But if each of us simply shares this video on Facebook, Twitter and over email we can shatter that number. Let's work together to reach 750,000 views online before the election.

And then forward this article to everyone you know so they can do the same.

Why is this important? TV networks use a public good ― the airwaves licensed to them by the Government. If networks decide who is allowed to advertise based on which messages they agree with, our democracy is seriously compromised. That's precisely why laws prevent the networks from refusing reasonable attempts by political parties to run ads during election cycles. But since GetUp members aren't a political party, the networks have decided that they can block our right to free speech ― purely because they don't like what we have to say.

They don't want our money ― but we don't need them. We're already moving our advertising online, reaching hundreds of thousands more Australians. And if we all share this far and wide, we can make our impact even bigger.

Let's prove that in 2013 people power can beat the corporate blackout. Our democracy depends on it.

To see how the events of the last few days have unfolded, including the great media coverage we've received since the ad was banned, click here: http://www.getup.org.au/whywewerebanned

The TPP: The dirtiest, most dangerous trade deal you've probably never heard of

7 February 2015, 4:00pm The secretive Trans Pacific Partnership is reportedly close to being finalised ...