IA speaks to eyewitnesses, including Senator Claire Moore, to get to the bottom of just what happened when Iain Fogerty, AKA @Can_Do_Campbell, was arrested on Thursday. Managing editor David Donovan reports on another disturbing development in the new Queensland police state. 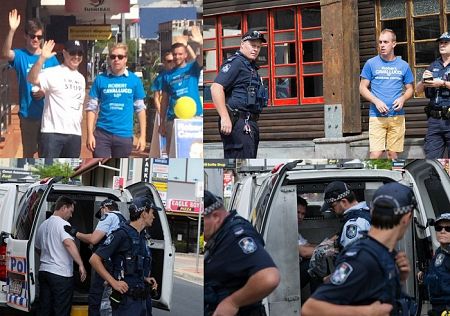 The arrest of Iain @Can-Do_Campbell Fogerty appears to have been utterly unwarranted and the response by Queensland Police entirely disproportionate. (Images: supplied)

TWO EYEWITNESSES to the arrest of Iain Fogerty ‒ the man wearing the ‘I’m with stupid T-shirt’ near LNP campaigners in Brisbane earlier this week ‒ have told IA how stunned they were by the over-top-police response to a “harmless prank”.

The arrest occured on Thursday morning.

At the time, a police spokesperson is reported to have said Fogerty – who runs the parody Twitter account @Can_do_Campbell – was a threat to the LNP campaigners:

"There was a guy who was being disruptive, pushing people around and stuff like that."

Disputing this statement was eyewitness Judi Jabour, who reportedly told the Brisbane Times on Thursday:

"All he was doing was standing there waving with an 'I'm with Stupid' T-shirt on and Luke Barnes, [LNP MP] Robert Cavallucci's campaign director, seemed to take offence."

Fogerty was charged with public nuisance offences and released to face court at a later date.

The incident prompted a storm of outrage ‒ and hilarity ‒ on social media.

Confirming Jabour’s account, and refuting the Police’s, both Labor Senator Claire Moore and another close eyewitness have told IA they saw no jostling, intimidation or physical contact by Fogerty whatsoever. One of the witnesses did, however, allegedly hear abuse being directed at Fogerty.

Both of the eyewitnesses who spoke to IA expressed deep concern about the heavy-handed and disproportionate nature of the police response.

Senator Claire Moore said, not only was there no violence, but the campaigners for LNP Brisbane Central sitting MP Robert Cavalucci did not even appear to be at all agitated.

This doesn’t accord with my sense of sense of how the law operates, for an arrest to occur there should be a sense of violence or unrest in the area.

What the man was doing was within what I have felt was acceptable after many years of politics and protests. The LNP campaigners showed no signs that they were agitated.

The other witness, who asked not to be named, was close enough to converse with, and hear the discussion between, Fogerty and Cavalucci’s campaigners.

The following is the second eyewitness' account [IA emphasis]:

It was about 8.04am, I noticed that Iain Fogerty was standing in amongst the LNP campaigners waving to passers by, basically imitating the others. It is his usual MO. I have heard of him before and, from all reports, he’s harmless.

I had reason to cross over and walk down that side of Brunswick Street.

On returning, I heard a campaigner say to Fogerty: “You’ve had your fun, now piss off!”.

Fogerty replied with: “I have as much right to stand here as you.”

One of the LNP campaigners, Luke Barnes, asked of me: “I thought we were having a clean campaign?”

I informed Luke that the ALP was certainly hoping to achieve that. Iain Fogerty is an individual entity and not connected to Labor at all.

Anyway, what was he doing that was dirty? Sure Iain is cheeky and irreverent, and annoying, but there was no indication at all that he was involved in jostling or even slight physical intimidation.

Senator Moore said she had been campaigning for 30 years and what Fogerty was arrested for – by more than ten police – was not out of the ordinary in any way [IA emphasis]:

I was quite amazed at the sequence of events that occurred … [on Thursday].

I have been street campaigning for over 30 years and one can always expect that during the course there will be some intimidation, perhaps some jostling.

The incident … was so low key I was at first surprised to see the police cars turn up. In fact, I was looking down towards New Farm and up near the Story Bridge to see if there was a serious event happening there. No, it was a harmless little prank across the street from us that required two police cars plus a paddy wagon containing eight, nine, or even ten police officers.

Senator Moore said the same sort of prank did not attract a similar response from police when perpetrated by LNP members [IA emphasis]:

I have heard of this fellow [Iain Fogerty]. I understand he has a Twitter following and he likes getting under people’s skins with these mild pranks. There was an occasion where something similar occurred with a Not4Sale group of campaigners. At that time, a young LNP member [Ben Riley] was photographed with a derogatory sign pointing at the ETU members. Although visibly displeased, the Union members did not resort to calling the police.

That was the situation [on Thursday]. The LNP campaigners obviously looked displeased, but nothing out of the ordinary seemed to be happening. They did not look afraid for their safety.

When I saw the man being put in the back of the paddy wagon, I ran across and questioned the officer in charge. I asked why the fellow wasn’t merely asked to move on. The police officer replied that, in his opinion, the situation was dangerous and that it was his decision to arrest the offender.

The obligatory warning of taking photographs was issued by the police to the witnesses.

I was quite offended by the comments of Police Union president, Ian Leavers, that people shouldn’t act like spoilt teenagers. I don’t feel that was appropriate.

Queensland. Beautiful one day. Police state the next. 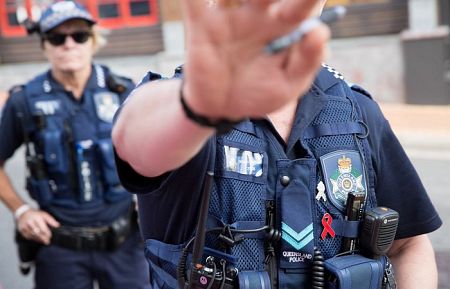 Looks to me like it was this ominous looking Young Lib that was reporting @Can_do_Campbell to the police. #QLDvotes pic.twitter.com/Q93uYfY4R8