Has the Trump Show jumped the shark?

It's been quite a week for the leader of the Free World and the Twitter champion of free speech. Jim McArdle reports. 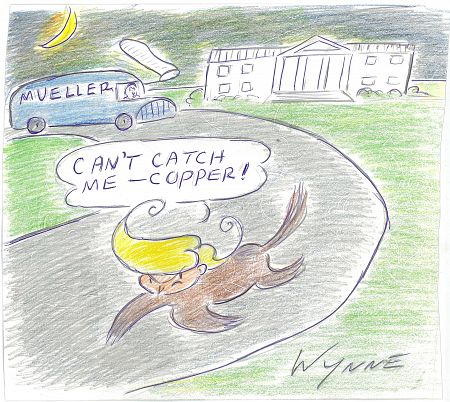 LOOK, I’m not even going to touch the Don Jr thing, except in passing. No, I’m moving straight on to this week when normal service was resumed, after an uncharacteristically quiet few days from the Twitter President.

There was, mind you, last Saturday’s unqualified support for the young’un:

My son Donald did a good job last night. He was open, transparent and innocent. This is the greatest Witch Hunt in political history. Sad!

Fact check: Trump’s misleading defense of his son - Trump emphasized that an attorney who met with his eldest so... pic.twitter.com/XTWGON3JrJ

After that, nothing really until yesterday when Trump conceded the possibility there was some Russian meddling — but definitely not by Putin. I’ll get to that.

If someone had said to you a year ago that you’d be reading headlines such as we’ve witnessed in the last 12 (Christ!) months you’d have called them a looney. Don’t believe me? Here, have a look.

Let’s start with an old favourite from last October:

Early look at tomorrow's front page
What Trump said he liked to do to attractive women: "GRAB THEM BY THE P---Y" https://t.co/HPZdvyep1p pic.twitter.com/cYd9IRB4sP

Then  there was Trump’s early response to the first reports of Russian meddling:

Trump: hackers could be Russia, China, or a "guy sitting on their bed who weighs 400 pounds." pic.twitter.com/KZUJsJkwXO

But then things started to get serious:

That rang a bell for me:

And this. I’ll leave it to you to decide which parts of the headline are accurate and which aren’t:

By now you may be thinking about that old stockmarket joke. During the GFC, a sharetrader jumps off Wall Street’s tallest skyscraper – number 40 – but now better known as, you guessed it, the Trump Building. On the way down, he’s heard to call out: “So far, so good!”

You’d have to wonder just how much worse things can get.

Well, the rest of the world worked it out a month ago:

And yet... and yet...  there are those who keep hanging in, keep saying it can’t get any worse. Well, let the markets provide another lesson from history.  The stockbrokers were saying that all the way from October 1929 until late 1932, when they were finally proven correct, many of them, alas, posthumously.

It does keep getting worse, just like the ratings for ‘The Celebrity Apprentice’ after Big Arnie took over:

Arnold Schwarzenegger isn't voluntarily leaving the Apprentice, he was fired by his bad (pathetic) ratings, not by me. Sad end to great show

This week, the press reported Trump, among other things, coming to his son’s defence.

"Zero ... [ improprieties occurred in a meeting that] ... most people would have taken.”

Even better, it wasn’t Putin who was behind all. And he could prove it. Take it away, Mr President:

(Yes, yes, I know. How do you ask “Did you do it?” in two completely different ways?)

Then he added these two absolute pearlers:

“Somebody did say if he [Putin] did do it, you wouldn’t have found out about it. Which is a very interesting point.”

Yes, it is an interesting point, if taken to its inevitable, logical, Trumpian conclusion. That is, if Putin had done it, we wouldn’t have found about it. So, because we did find out about it, it couldn’t have been him. QED.

Then a sign off with a flourish, speaking on behalf of the American people:

“Now, everybody agrees that there was no impact on the votes in this election, which is very important to say, but we have to make sure that nothing could ever happen to our election process."

Rough translation; any Russian meddling didn’t affect the result but we can’t have it happening again, can we?

It can’t get any worse, can it?

Pictures of dead Russian journalists since Putin came to power. This is who Trump praises, his buddy pic.twitter.com/BrJAxxe7nw

Has the Trump Show jumped the shark?