Halloween has arrived, but in America, the culture of fear is a year-long thing. US correspondent Ginnie Becker reflects on her adopted nation’s scary obsession. 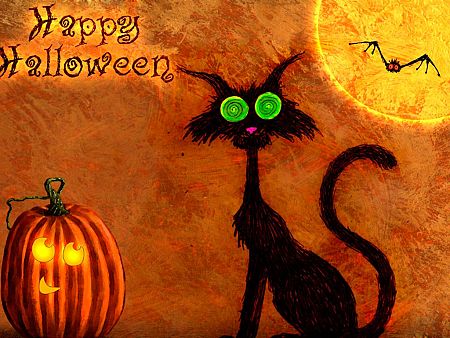 It’s Halloween, and we Americans love to scare ourselves silly so much we created a national holiday in order to celebrate it.

We are entranced by things that slither, things that jump out or bite, things that lurk in the shadows and generally anything that will Get us. We have a national obsession with vampires and zombies, evidenced by the amount of literary fodder on the shelves and online. We go on haunted house tours, on ghost-hunting night walks, and sit around campfires stuffing our faces with marshmallows, chocolate and biscuits (otherwise known as Smores to the uninitiated)  listening to stories of Things That Go Bump In The Night, growing wildly jittery and bug-eyed. We seek the thrill of fear; live it, breathe it, crave it, but not just once a year at Halloween. Fear is part of everyday culture here. Halloween is just an excuse to buy (or sell) stuff to clutter decorate your house with, dress up and go out in public in your wildest fantasy clothes without question from the neighbours (slutty nurse outfit, anyone?), use up the pumpkins we don’t eat anyway, stuff ourselves with large amounts of chocolate and food colouring…and get an extra fix of fear under the guise of it being fun.

Four mythical creatures top the list of Things Of The Left That Will Get Us If We’re Not Careful: the Socialist Succubus, the Federalist Firedemon, the Handout-seeking Hounds of Hell, and last (but definitely not least) the ever creepy, rockspider-like and child corrupting Mr Moral Decay. Lower on the list, but no less terrifying, are (in random order): Terrorists, Muslims, Planned Parenthood, unions, Occupy protesters, Philosophy students, gays, Greens, and atheists. All of these strike fear into the hearts of many a Fox News viewer, who remain steadfastly glued to their televisions in their gated communities for breaking news reports of any demonic activity. Fox finds a lot. They are excellent at sniffing out Things That Will Get Us.

Underpinning this culture of fear is a tendency to ignore continuums in favour of Good Guy/Bad Guy dichotomythink, particularly on the right of the political spectrum, but also observed on the left on occasion. (Well, after all, this is the country that gave the world Spaghetti Westerns.) Kill it! Kill it! It must not live! Eeeek! Accompanied by an extended version of The Spider Dance is a not uncommon reaction to sightings or even stories of these hateful creepy crawlies. There is often no room for stepping back and seeing if elements of the monster in question might actually be of some use to us somewhere, or if, in fact, it’s a monster at all (but that would be Integrated Pest Management, which reeks of hippie greenie idiocy, so let’s not go there either.)

Whether these horrid, leftist monsters actually come and shred us limb from limb, spreading our grisly remains across our manicured lawns for the gastronomic pleasures of roaming vicious canine packs (otherwise known as the EPA) remains to be seen. Until we are certain of our safety, we best keep checking for Reds Under the Bed, never venture into basements after dark (a particularly prized habitat for Handout-seeking Hounds; watch for signs of pizza boxes and discarded Mountain Dew bottles), and sleep with the lights on (brought to you by the Energy Department, who cares about your safety). Oh, and leave your TV and police scanner radio on. Some silver bullets would not be overkill (proudly endorsed by the NRA).

Trust us. We’ll protect you if you vote for us. And hand over your paycheck for a campaign donation.

Remembering 9/11 and daring to dream

11 September 2011, 12:01am Australian expat Virginia Becker had been living in the US for just eight ...
Join the conversation
comments powered by Disqus
News updates