Despite growing corruption evident within our Government, we've still yet to reach an effective solution, writes John Haly and Dr Martha Knox-Haly. 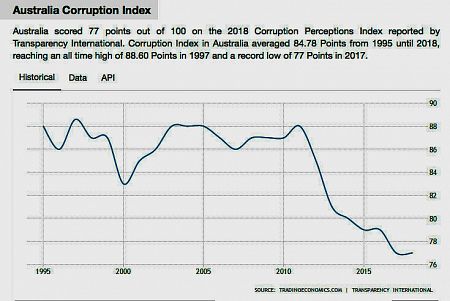 Australia Corruption Index at its lowest point in 2019 (Image via tradingeconomics.com)

During the current term of the Federal Coalition Government, Australia fell from 7th place to 13th place in 2015 and has not shifted since on Transparency International's index. This relative stability is illusory. The indexed gap between United Kingdom (80) and Austria (76) is the widest available for the top 20 least corrupt countries. The width of this gap has obscured Australia's actual fall from 79 to 77. The latest review by TI was completed by September 2018, after which time new Federal Government scandals emerged:

This prompted renewed calls from the media and public for a Federal ICAC to be established. Previously submitted by Senator Bob Brown in 2010, Adam Brant in 2012 and 2017, Christine Milne in 2013 and lately Cathy McGowan in 2018. None of which have come to fruition.

In early 2018, the Australia Institute convened a panel of experts on the subject of the different forms of anti-corruption commissions, generating diverse political and legal reactions. The report’s recommendations remain unenacted despite growing corruption in our governance.

Apart from Tony Abbot begging the Government not to create an integrity commission, both major political parties were at least considering such a commission. The Federal Labor Party has promised to implement an anti-corruption agency based on the Australia Institute research. In the meantime, Cathy McGowan delivered her National Integrity Commission (NIC) legislation in the last week of November and the second Bill for the National Integrity Bill in early December.

Success! A federal ICAC in the making.
Scott Morrison executed a stunning backflip to support Cathy McGowan's bill for a national anti-corruption commission to avoid a humiliating defeat on the floor of Parliament.  https://t.co/ZyYtwVnYq8

Despite a motion in support in Parliament, it was referred to the Senate Legal and Constitutional Affairs Committee for a report due 5 April. Morrison was initially dismissing it as a “fringe issue”, rejected the McGowan model, offering the coalition’s version, which was neither retrospective, public nor able to make findings of corruption.

Corruption fight as a threat to democracy

How we structure and manage anticorruption commissions matters.

Transparency International's anti-corruption conference in Denmark in 2018 made a predictive and correct analysis of Brazil's presidential elections based on what many saw as the failure of anti-corruption measures. I attended a workshop in Copenhagen titled ‘The fight against corruption as a threat to democracy’, predominately concerned with achieving increased transparency without political radicalisation. Jair Bolsonaro’s rise to power was a cautionary example.

The workshop concluded that an improperly managed anti-corruption body could be both ineffective and harmful to civil society, engendering populist movements and anti-establishment radicalism as manifested in Brazil. Corruption prevention by itself would not strengthen democracy and scandals could lead to:

So we need to ask of any commission:

In Singapore, the CPIB reports directly to the Prime Minister’s office, but in the era of Donald Trump, is a direct line to the top a good idea? Does it cover civilian public servants, the private sector, the police? Should elected officials, including our Prime Minister, be classed as public servants and answerable to this commission?

At this point, we come to the conflict that occurs between lawyers versus political/civil objectives. Legal experts have argued that public hearings risk reputational damage, but interestingly, even The Australian's Mark Coultan noted that ‘ICAC routinely conducts priv­ate hearings before proceeding to a public inquiry’.

He went on to remind us that:

‘Mr Sturgess, head of the cab­inet office in the Greiner Government when ICAC was established, warned that making all hearings private would radically alter the nature of the organisation.’

When you consider that it was Ian Macdonald, found guilty of corruption, who said making hearings private was long overdue, it may be mindful to ask who seeks to gain the most from secret hearings? A lack of transparency will always hide corruption.

Lawyers also express concerns around the lack of the usual rules of evidence that exist around admissibility of evidence to these commissions. For example, lack of available admissible evidence was why in the case of Bankstown and Strathfield councils in November of 2007 resulted in findings of corrupt conduct, but did not result in a referral to the Director of Public Prosecutions. This case essentially represented a tussle between criminal standards of evidence versus a civil good.

Conversely, it has been argued that public hearings play an essential role in engaging the public in democratic processes and this is clear through regular community surveys. Transparency builds confidence in public institutions and giving whistleblowers a line of sight between their actions and consequences. Whistleblower Rebecca Connor's mining corruption allegations could have been buried with parliamentary debate and committees. Although, parliamentary committees have upheld the principle of public hearings on several occasions. Assertions of unfair reputational damage overlook the detailed pre-investigative processes that preceded public hearings. 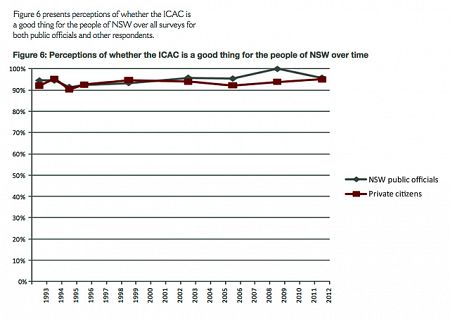 Positive perceptions of ICAC for the people of NSW over time (Image via icac.nsw.gov.au)

NSW ICAC regularly receives approval levels above 85% in community surveys. In states where hearings are conducted in secrecy such as Victoria’s IBAC or South Australia’s ICAC, there is little community awareness and consequently has no role in building community confidence. The vast majority of the public perceives that most, if not all, politicians are corrupt.

The next important consideration is that operational legislation specifies the right to investigate, recommend charges, present reports to Parliament and pursue Parliamentarians. The early successes of NSW ICAC from 1989 to 1993 and then later from 2011 to 2015 were facilitated by strong political will and commitment to transparency. A commission thrives or withers depending on the level of political favour. The first few years of an agency being established are marked by many legal challenges to its jurisdiction. Therefore, a dynamically supportive legislature is a must in addressing weaknesses exposed by legal challenges.

Does the commission have funding for a dedicated unit to provide advice around legislative reforms? One of the reasons for NSW ICAC’s success under Ian Temby QC was the existence of such a department which was able to provide advice on matters of legislative reform. [NSW ICAC Annual report 1991 pg 66]  There also needs to be a mechanism for independent evaluation of the ICAC’s budgetary needs, as investigations and public hearings are costly.

So how do the respective models offered by McGowan versus Morrison stack up? On 13 December 2018, Morrison announced a Commonwealth Integrity Commissioner (CIC), who would have oversight over a Law Enforcement Integrity Commissioner and a Public Sector Integrity Commissioner. The new commission will have the power to investigate politicians and their staff but is not allowed to act on complaints raised by the public or reported in the media. It will not have public hearings and is designed to respond to allegations of criminal conduct. Criminal conduct represents a much narrower standard than what has been applicable for other state-level anti-corruption agencies, which had a broad mandate of investigating misconduct.

ScumMo's Corruption Cover-up Commission is a ploy to prevent implementation of the good work on a REAL Fed ICAC by former judges/Aust Inst, Fed backbenchers McGowan-Sharkie-Wilkie and Fed ALP. And to protect his corrupt colleagues.https://t.co/7xsDhGeFUd

Grey instances such as Susan Ley’s use of tax-payer funded travel to coincidentally inspect an investment property, Barnaby Joyce creating a position for his partner or Peter Dutton's profiting from Childcare facilities, or the lack of tendering for the Great Barrier Reef Marine Park Authority funding scandal would not be referred. Can the status quo be challenged as we sanction misconduct by directing it to internal review?

Funding is estimated to be between $100 to $125 million and is considered inadequate. There is a proposal around mandatory reporting of corrupt conduct by public servants, but this does not include mandatory reporting by parliamentarians. It is not clear whom this commission will report to, or whether it would present publicly available reports to Parliament. Not surprisingly, former NSW ICAC Commissioner David Ipp described the CIC as the “kind of integrity commission that you would have when you don't want to have an integrity commission”.

This article was based on research conducted by Dr Martha Knox-Haly which can be found at researchgate.net.