Gillard’s “misogyny speech” ― one month on

A month after Gillard’s now famous “misogyny speech”, Bec Zajac reflects on why the speech was so fundamentally important. 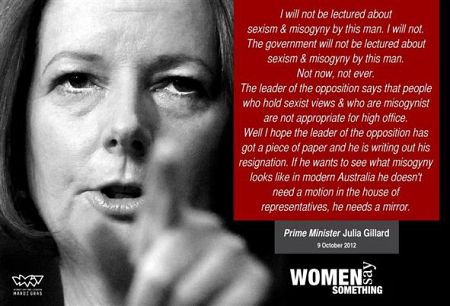 A month ago, Julia Gillard delivered her now famous “misogyny speech”. In that time, there’s been much written about the event from right across the political spectrum.

Conservative commentators have called the speech everything from “flawed” to “pathetic”. From the left, there has been criticism that it was hypocritical of Gillard to point a finger at sexism, whilst on the same day her Government announced devastating cuts to single-parent payments.

There’s also been a fair share of commentary about the role social media played in spreading the speech around the world and speculation about why this speech was so popular overseas, but not covered on Australia’s front pages.

Sexism comes in many forms.

One form is that of direct attacks.

Another form of sexism is more insidious. It’s the kind of sexism that works, after a sexist attack is made and named as such, to deny that the act was actually sexist or offensive at all. We witness this when a woman says to her peers, “That was so sexist” and her peers respond by saying, “You think everyone’s sexist”; or they say, “Don’t get all feminist on me”, or they say, “That’s just Bob being Bob”. Often the response comes as a roll of the eyes.

Throughout our lives these kinds of dismissive responses work to silence women. They teach us to brush off sexism with a laugh or a shrug, and they enforce the golden rule that not only is sexism okay, but that what is not okay –neither socially nor politically – is to call out sexism where you see it.

We witnessed this last month when, during Julia Gillard’s live Facebook Q and A session, she was bombarded with the kind of horrendous, sexist abuse that would make anyone’s stomach churn. The response from her and her spokespersons was to dismiss ‘the tiny minority of offensive comments’ as insignificant, and announce that they felt positive about the outcome of the session. Presumably, Gillard was trying to keep that golden rule ― when attacked with vicious sexism, whatever you do, don’t name it as such.

However, in Gillard’s landmark speech last month, that rule was broken.

Not only did Gillard boldly stand up to a culture that says it’s ok to make sexist attacks on women. But she stood up to a culture that says it’s not ok for a woman to call people out for the sexist attacks they make. For women everywhere, who have experienced the act of being silenced after pointing out sexism – either externally or internally – that was incredibly empowering.

Unfortunately, in the weeks that followed the speech, many commentators accused Gillard of “playing the gender card”, or the “sexism card” ― a phrase that implies that she who is pointing out sexism is simply doing so to score points and not because an actual offense has occurred. In short, the mainstream media in Australia greeted Gillard’s speech with the equivalent of a massive eye roll.

Not only did this work to deny that sexist attacks had even been made on Gillard to begin with, and to reinforce the sexist culture that Gillard’s speech spoke against ― but it also meant that the chance to have a broader discussion on sexism in the media, in politics, and in society, was missed.

It’s true, Gillard is no ideal feminist, as commentators have pointed out ― but that doesn’t take away from the fact that her speech was bold and brave and unique and stood up to the sexist culture we inhabit. Part of the job of being a Prime Minister or national leader is to direct policy. Another part is to give speeches that set examples about how citizens should act.

The role a speech like this can play in changing a culture of discrimination should not be underestimated.

In that speech, which has now been viewed more than two million times on YouTube, Gillard showed those of us watching that not only is it not fine to be a sexist, but that what is okay is to call sexism out where you see it. I wouldn’t be surprised if there are girls all around the country, and all around the world, who – after watching Gillard on their computers, phones and Ipads – when next confronted with sexism in their own lives, will feel empowered to do the same.

Gillard’s “misogyny speech” ― one month on

2 September 2012, 5:48pm Why are Melburnians lining up outside in the freezing cold to see a few New York ...
Join the conversation
comments powered by Disqus
News updates