Around 150–180 people were in attendance at Hughes Community Centre in Canberra on Wednesday evening 6 February 2019 to hear from GetUp.

They were all there to find out what GetUp was going to do to unseat the hard Right at the coming Federal Election and what they could do to support GetUp with this.

As Henny Smith, the GetUp Election Director, told the crowd at the start, “there is no such thing as a safe seat”. Any hard Right figure can be defeated with the right campaign strategy, Henny explained. GetUp believes they have that right strategy this time.

Henny admits GetUp spread themselves too thin at the last Federal Election, having a good impact in some seats but very little impact in others due to stretched resources.

This time, GetUp is focusing on a short hit list of hard Right figures – the current MPs and Senators they see as the biggest threat to our future – and believe this narrower focus will have a much more meaningful impact overall as a result.

GetUp officially announced for the first time at the event that the third hard Right figure whose electorate will be targeted is Kevin Andrews, in the seat of Menzies.

A founder of the pro-coal “Monash Forum” and proponent of the No campaign against marriage equality, Andrews’s record on racism is terrible. As Immigration Minister, he instituted discrimination based upon where visa applicants come from and is the originator of the “gang” rhetoric aimed at African communities.

“Everyday people don’t want politicians like Kevin Andrews blocking progress towards a modern, multicultural Australia and are raring to work together to change what’s possible,” she said.

This is in addition to the previously announced number one and two targets which are Peter Dutton in the seat of Dickson and Tony Abbott in the seat of Warringah, respectively.

GetUp believes that climate change is the biggest issue voters across the political spectrum are currently responding to and is the key issue that will swing votes away from the hard Right in this election.

This is not surprising, considering recent events including the death of millions of fish in the Murray-Darling river system, the growing opposition to the Adani coal mine proposal, the ongoing death of the Great Barrier Reef, record high temperatures and extreme bushfire events, along with many other factors that point to the need to act on climate change now.

Ale Moliterno outlined for those in attendance exactly what GetUp’s “secret sauce” plan is to defeat the worst hard Right figures at this coming election.

In essence, it''s what Ale called a “massive voter contact operation”, that the “most effective way to change a voter''s mind is with one-on-one conversations with a trained volunteer”.

GetUp made over 218,000 calls to voters at the last Federal Election, but their goal for this election is to make over 1 million calls. The way they plan to achieve this is what they refer to as “calling parties”.

Volunteers will host events at their own home, multiple times, preferably over the course of GetUp’s campaign, where groups of volunteers will gather and all call voters from a provided electorate target list. They will talk to each voter about who they vote for and hopefully changing their vote away from the sitting member if that is who they voted for last time.

Ale told the audience that rusted-on Liberal voters are ready to change their vote — with GetUp''s help.

Through shared common values, the volunteers can change voters'' minds by:

Through one-on-one conversations and genuinely connecting with each voter they can swing votes away from the hard Right, GetUp believes.

A GetUp volunteer will attend the first calling party each person hosts to act as a guide and mentor and after that, it will be up to the volunteers to keep going on their stead with the provided calling sheets.

“We [GetUp] are the most powerful people in this country,” Ale announced to those gathered.

This is surely something the Liberal National Party (LNP) coalition is worried about, if the Government’s attempts last year to interfere with GetUp’s ability to operate are anything to go by.

GetUp volunteers will attempt up to five times to reach voters in a targeted electorate over the course of their campaign, thereby maximising their chances of reaching as many voters as possible. 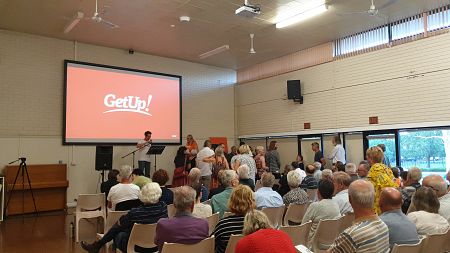 GetUp needs a lot more volunteers this election than last time to have a chance of hitting their quota of 1 million calls made to voters.

As for how much will Canberra do, Henny told Independent Australia:

Over 140 locals from across Canberra packed the room to launch GetUp''s national election campaign and make a commitment to take on the hard Right. We promised an action event (not a talk-fest!) and wow, did Canberra deliver.

Collectively, we signed up for 102 calling shifts across 51 calling parties hosted by 21 incredible calling party hosts — over the next two months that could lead to about 25,000 calls.

GetUp believes they can and will have a significant impact on this coming Federal Election.

The hard Right LNP members they are targeting are right to be worried, many of them sitting on “safe margins” that, based on recent polling, may not actually be that safe after all.

If you want to help GetUp unseat the “worst” hard Right figures in Parliament, you can volunteer for them, too — they very much want your help and that of your friends and family.

You can also get in touch with them on social media and find out when and where calling parties are happening in your city.

Together with your help, GetUp believes it can change the face of this election. They want to know — are you ready to help them make that happen?

For too long, Kevin Andrews has tried to drag Australia towards a poorer, hotter and racist future. That''s why he''s GetUp''s next hard right target, with Abbott and Dutton. Will you chip in to help fund the campaign? https://t.co/xN8f28BkZN via @GetUp

Our next target for the federal election is one of the worst hard right wreckers of all: Kevin Andrews. pic.twitter.com/lLE4wBTQ5E

30 December 2020, 3:00pm Much fauna perished in the bushfires that stripped the nation early in the yearÂ ...

28 August 2020, 4:30pm The A.C.T. Greens have made a progressive move towards drug decriminalisation and ...
Join the conversation
comments powered by Disqus
News updates