Freedom of speech: Not coming to a university near you

Assistant editor Michelle Pini discusses the notion of freedom of speech in light of the recent suspensions of academic professors Roz Ward and Martin Hirst.

IN HIGH SCHOOL, I had a friend, let’s call him Red, who was an outspoken communist. This interested me in as far as I disagreed with his philosophy on life. We argued often and usually with fervour but we remained friends.

When I read about recent events in which La Trobe University lecturer and Safe Schools co-founder Roz Ward was suspended due to political comments on her personal social media page, I found myself wondering what would happen to Red if he were a university educator today.

Another academic, associate professor Martin Hirst, has been similarly suspended from his role at Deakin University for comments made on his personal twitter page.

Ironically, for an article about free speech, these events led me to withold Red's actual name.

Both of these university lecturers hold Marxist views. Neither of these people said or did anything illegal or threatening. You may not like their views and you may even have an impression of how a senior lecturer should behave. You are entitled. But who decides where and when the line is crossed and what are the criteria?

In a world where life’s minutiae are plastered across everyone’s Facebook or Instagram page, what constitutes freedom of speech? Does the censure of speech apply only to those in senior positions or to everyone? Does it only apply if you’re discussing contentious subjects? If so, which ones?

If you work for Coles, for example, but dislike their $1 a litre milk policy, can you be fired for criticising them? What if you install solar panels on your roof but work for Energy Australia? Or, if you're employed by a munitions company and spruik world peace?

Deakin Uni's victimisation of Martin Hirst is the same kind of political censorship and persecution that La Trobe... https://t.co/60VYB0R5yL

In our “private” lives, are we permitted to use profanity (so common on social media and in popular music, film and television) if we feel like it? Are we allowed to announce we think the government of the day to be an embarrassment, or is this only okay if you are a media mogul?

Roz Ward has since been reinstated due to public uproar, which made La Trobe University look ridiculous.

Martin Hirst, however, looks like he will lose his job. Let’s examine his “crime”.

Lastly, after someone with whom Hirst was having a robust debate admitted to being a student of commerce, Hirst asked whether he ‘was happy to fail’.

Although the Deakin student attends a separate campus and different faculty to Hirst, someone complained that the student had been “threatened” by Hirst’s comment.

Really? A legal adult, happy to argue about politics with perfect strangers on social media, just happens to discover that the person with whom he is arguing is a university professor (at a different campus and faculty!) and finds his sensibilities so weakened, that he is forced to believe his academic future to be under threat? Wow.

Since Hirst was unaware the student in question (who we’d better not name in case it adds to his pain and suffering) was a Deakin student, perhaps the student took the Safe Schools premise a tad too far?

However, in a follow-up tweet, the student called the “threat” ridiculous and commented that he was happy with his grades.

Deakin University, for its part, has clearly undertaken an “in depth” investigation into the affair by jumping to the instant conclusion that Hirst is a public menace and informing him that they intend to terminate his employment due to ‘serious misconduct’.

This is not the first time Hirst has been in trouble over controversial tweets. In 2014, Hirst was subjected to an avalanche of abuse for his Marxist views by trolls who tweeted sexually-explicit, homophobic and racist rants at him. Hirst responded by telling the trolls to ‘Fuck off’.

Deakin threatened to sack him after Andrew Bolt (who, bizarrely, spruiks free speech) drew attention to the incident in his Herald Sun blog. But after three months on suspension without pay, Deakin reinstated Hirst following a public outcry from over 300 academics who signed an open letter and wrote directly to Deakin VC Jane den Hollander. 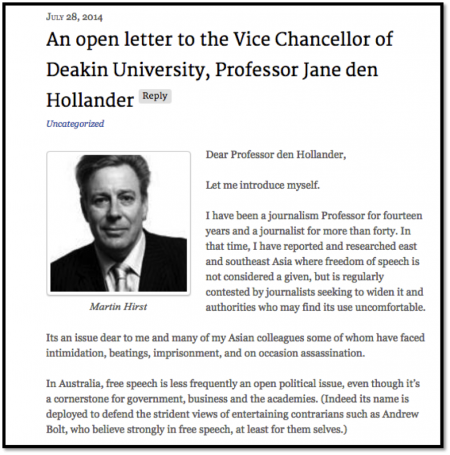 Hirst told me he rarely responds to trolls since that incident. He said,

If I respond at all to the trolls it is with the type of comment I made to the Deakin student – it was sarcastic about his intelligence but it was not a threat. I am careful and Deakin wouldn’t even know about the beanie tweet or the chimp tweet if they hadn’t gone looking.

Hirst goes further, saying he believes that the right to say “fuck” is a free speech issue:

“I think we have to fight for the right to say ‘fuck’.”

Hirst wrote in his now public response to Deakin’s allegations:

The word “fuck” is in common use and can be heard every day of the week on the [Deakin] campus, on television during prime time, … at the footy and on Twitter. … The sentiment I clearly expressed in this tweet is no more than a common and humorous response to going back to work after a break.

The response from Deakin was brief and to the point:

‘You also assert that “fuck it” is commonly used and causes no offence. I disagree.’

In its only public response so far to the threat to sack Hirst, Deakin claims that it protects the right of its academics to pursue debate.

However, in Hirst’s case this year and in 2014, the university made no attempt to protect him from trolls and abuse orchestrated by others, including Andrew Bolt. Instead, after an anonymous complaint by an unconnected party and after then trawling through Hirst’s Twitter feed to find more “offensive” examples, Deakin has chosen to pronounce a staff member guilty as charged.

At the same time as Hirst’s case was making news in Australia, an American academic, Steve Salaita, was subjected to abuse by pro-Israel lobbyists after he announced his support for the Boycott, Sanctions and Divestment campaign (BDS) against apartheid Israel.

Salaita was sacked by the University of Illinois but later received a $600,000 payout when the case was finally settled.

During the time Red and I argued about politics, we shared our views publicly and without reservation at every opportunity. We went to university with the implicit belief that our educational institutions would encourage us to embrace independent thought and foster our right to express our beliefs.

Today, it seems that the right to free speech on our campuses, at least for staff with views that may not be in step with university management, is under threat.

Massive overreaction by DeakinUni; kudos to @ethicalmartini for having the guts to say what sensible people think https://t.co/KecRbo8R42