SUBSCRIBE   DONATE LOGIN SHOP
SUBSCRIBE   DONATE
How we prevented a Morrison dictatorship
How Howard screwed the Libs
U.S. site tries to ruin what makes fairy bread great
Bloody Idiot of the Week — Episode 28: Get used to it
Morrison's 'politics of retribution'
International

On Sunday the 23rd April we discovered that the second round of the presidential elections would be between Emmanuel Macron, a neoliberal who has already declared his intentions to continue to tear up labour protection laws without even a parliamentary debate and Marine Le Pen, an unsuccessfully detoxified fascist leader. Hardly an envious situation for anticapitalists of any country, even if the historic vote (19.6%) for the radical Left programme of Jean-Luc Mélenchon brightened the picture up somewhat...

Since then, a fierce battle of public image has been raging between the hard right Macron and the Front National’s Le Pen. Macron, who has never been active against fascism, has been visiting Holocaust memorial sites, while Le Pen, whose voting record in the European Parliament shows how little she cares about workers, is spending her time at factory gates. She has also been pretending to be interested in the environment and in women’s rights.

Marine Le Pen pulled off a major tactical victory a few days ago by sealing an alliance with a small right-wing (but not fascist) party Debout la France (Stand up, France!). This party was founded in 2008, has 15,000 members on paper and works under the slogan “Against the system and against extremism”. Its leader, Nicolas Dupont Aignan, got 4.7% in the first round of the presidential elections. Le Pen has announced she will make him prime minister if she wins the presidency. She has managed to present the Front National (FN) as a party of government, which knows how to compromise and build alliances — in this way, she hopes to win over support from the mainstream right.

Panic and the Left

The debate on the Left on what to do now is being carried on with substantial quantities of panic, confusion, moralism, less than fraternal behaviour and helpful advice from the other side of the world via Facebook. The situation is made immeasurably worse by the lack of a national, broadly based permanent antifascist campaigning organisation, which could have been preparing the necessary initiatives for months, as well as working to reduce Le Pen’s score in the first round.

The Socialist Party, the Green party and the Communist Party have all called for a vote for Macron, as have several feminist and antiracist bodies. The Communist Party underlined that the call to vote Macron did not change the fact that they would be pushing to fight his policies every step of the way. My own organisation, Ensemble, has also called to vote Macron (although I personally do not agree). The far left New Anticapitalist Party, who got 1.1% in the presidential election, released a statement saying they “understood” those who would vote Macron, but were not calling to do so.

Jean-Luc Mélenchon, whose “Insubordinate France” election campaign was tremendously successful and saw the biggest and most enthusiastic rallies on the Left for years, has declared that no-one should vote for Le Pen, but has declined to say whether he felt people should vote Macron or abstain. The reason for this declaration is that a call to vote Macron would be unacceptable to a large part of his electorate, and a call for an abstention unacceptable to another part. Macron has been a key architect of austerity and attacks on the working classes, and he is cheerfully promising much more of the same (proposing, for example, that unemployed people not be entitled to benefits if they have refused two job offers).

The result of Mélenchon’s position has been an avalanche of slander in the media, (attacks supported even by some Left activists), scandalously suggesting that Mélenchon is an ally of the fascists. The French elite is far more afraid of Mélenchon’s 19% in the election that of Marine Le Pen’s 21% and this is the reason for the slander campaign. Even Macron seems to spend as much time attacking Mélenchon as attacking Le Pen and he does not even use the word “fascist” to characterise his FN opponent.

I have nothing but contempt for this "ideological purity" >> Most Mélenchon supporters will not back Emmanuel Macron https://t.co/wcuqhcOHUN

In reality, the statistics for last week’s first round results suggest that Mélenchon’s supporters are among the most effective antifascists. His radical Left campaign drew voters away from the Front National in a way that the “austerity as usual” candidates could not. Le Pen was at 27% in the polls in February and finished at 21%, and this was largely due to the dynamic of Mélenchon’s campaign. He won more young people and more unemployed voters than the fascists did. Mélenchon is also the only political leader who had the courage to challenge Marine Le Pen by standing against her in her own constituency a few years back and he won a court case when she sued him for calling her a fascist. Supporters of Mélenchon today are furious at those around the Socialist Party who, after having said for years that the radical left and far right were practically the same thing, are today attacking Mélenchon for his choice of tactics between the two rounds. Nevertheless, Mélenchon’s appearance on peak time television this week saw him put all the emphasis on the legislative elections in June, and not make a priority of building antifascist demonstrations this week. His essential electoralist orientation was clear.

On 1 May, we finally saw around two hundred people take to the streets of France to defend working class interests against fascism and neoliberalism. This was a much-needed encouragement for antifascists. The mobilisations took place in hundreds of towns across France and many people who rarely demonstrate wanted to show their hatred of Le Pen. The mobilisation, however, was several times smaller than that in 2002, the last time the fascists were in the second round. In 2002, the route of the march in Paris was so jam packed that the demonstration could not move off from its starting point for six hours.

Other antifascist initiatives have marked this week. In one town, the FN representative was chased away away from a Holocaust memorial ceremony. Antifascist lawyers and antifascist workers in culture have set up protests and petitions, as have Catholic workers’ groups and others. Over recent weeks, counterdemonstrations to FN meetings have been seen in a number of towns. A series of high school students’ demonstrations were held during the last week under the slogan “Neither Macron nor Le Pen” and in several places they were gassed by police.

Theirs was no doubt not the best of slogans, because it is divisive and can be read as attacking those who will reluctantly vote Macron. “No votes for the fascists!” would have been better. But the most important thing is that the young people mobilised, and it was particularly foolish of left wing activists to denounce the demonstrations, as some have been doing.

Various trade unions, nationally or regionally, have brought out leaflets and press releases to build for the first of May demonstration. Some of the union declarations call for a vote for Macron while insisting that Macron will remain an enemy. “No votes for Le Pen, no honeymoon for Macron” is the headline of one of them. Others, such as the FSU, the national confederation of Education Unions,  concentrate their fire with the compromise slogan which I think is best "No votes for Le Pen”. The CGT nationally declared “Not a single vote should go to the far right candidate” without explicitly calling to vote Macron.

The reasons for the limited mobilisation this week compared with 2002 are several. Firstly, Marine Le Pen’s campaign to “detoxify” the FN and persuade the world that it is not a fascist force has had considerable success. Even among people who are opposed to her ideas, many do not consider her fascist and, of the eleven candidates for the first round of the presidentials, hardly anyone ever called her a fascist. Secondly, the FN is now treated in the media as a friendly, mainstream party, with their spokespeople being asked to comment on everyday events and invited on chat shows, with its antisemitism and racism rarely challenged on screen. Thirdly, the favourite themes of the FN – reasons to hate muslims and immigrants, and the need for law and order and states of emergency – have become so common in mainstream parties and on television that the FN automatically seems less extreme. Last year, famously, mainstream right wing mayors passed by-laws banning Muslim women from wearing full body swimsuits on the beaches, the Socialist Party prime minister applauded the bans, and the radical Left did not mobilise. 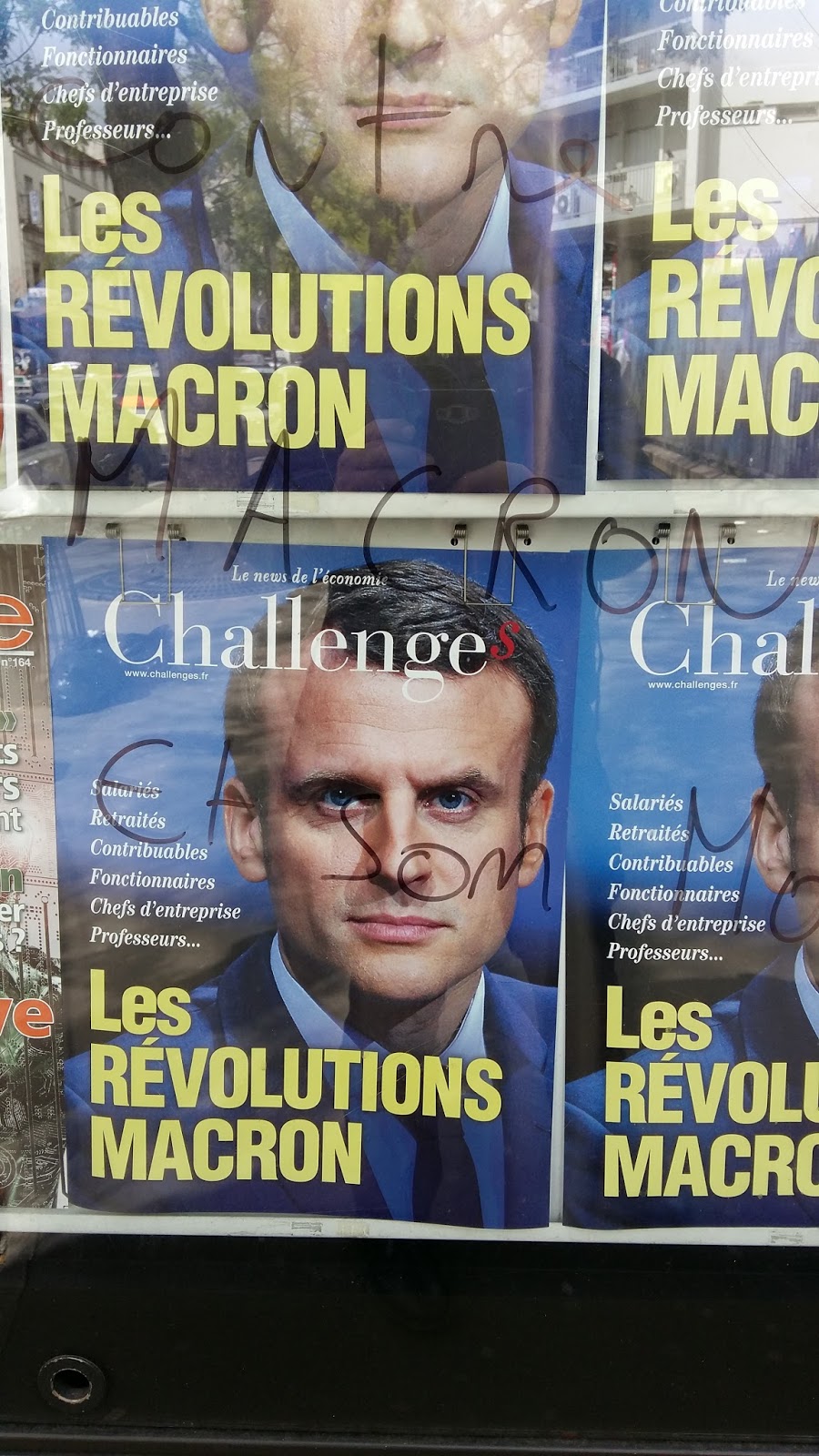 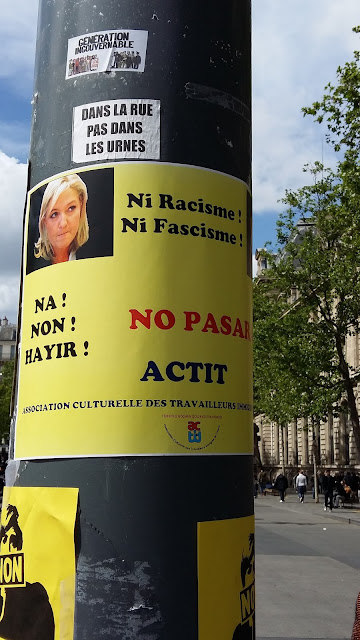 What needs to happen

The major problem in the present situation is the lack of a broadly based, permanent, national, campaigning organisation against fascism.What is needed is week-in, week-out antifascist education all the year round, not two weeks of mass antifascism every fifteen years.

It is most likely that Le Pen will lose the second round. However, she will get her largest vote ever and her organisation will be hugely emboldened and ever more of a grave danger for working people. The French working class is paying the price today for two major weaknesses of the French Left. The first is the lack of significant active opposition to Islamophobia from the Left or the far Left, which has allowed it to become a key manner of attracting people to voting for the FN. The second is the lack of specific national permanent organisations to fight fascism. The reason for this lack is the confusion about fascism. It is very widely held on the French Left that building a Left alternative to austerity and poverty is the only "real” solution to the problem of workers voting for fascism. This has a grain of truth, but it misses out on the crucial necessity of preventing the fascists from building meetings, demonstrations and other activities which are vital to their construction. The result is that today over 50 000 marched in Paris while Le Pen held a mass meeting of 5,000 or so at practically the same time 15 miles north, without even a demonstration in front of the venue!

The legislative elections in June will see the current political earthquake continue. Further sections of the mainstream Right will ally with the fascists (something they have avoided doing for 20 years). Socialist party MPs will be scrambling to form new alliances and organisations, and the radical Left will be working to build on its excellent score last week to build a powerful anti-austerity Left force. It is to be hoped that such a force will learn to be active outside parliament as well as inside.

John Mullen is a member of the organisation Ensemble and lives in the Paris region. This story was originally published on John Mullen's blog and Counterfire.

New poll in the French election:

5 May 2017, 5:00pm Whichever way the votes fall today, France looks to be taking a big step to the ...
Join the conversation
comments powered by Disqus
News updates