RenewEconomy's Sophie Vorrath reports on the eye-watering $trillions that are being poured into fossil fuel subsidies around the world, amounting to more than the total health spend of all the world's governments.

HOW LARGE are global energy subsidies? The answer: quite a lot larger than we thought, according to new estimates from the International Monetary Fund, which puts the cost of subsidising fossil fuels at an enormous $US5.3 trillion a year, or around $US10 million a minute every day.

The eye-watering figure, based on calculations the IMF describes as 'extremely robust,' is more than double the projected 2014 estimate the IMF released around this time last year, and amounts to more than the total health spending of all the world’s governments.

It is somewhat of an irony, then, that the IMF’s new figure of $5.3 trillion is largely attributed to polluters not paying the costs – social welfare, health, environmental and broader economic – imposed on governments for the burning of coal, oil and gas. 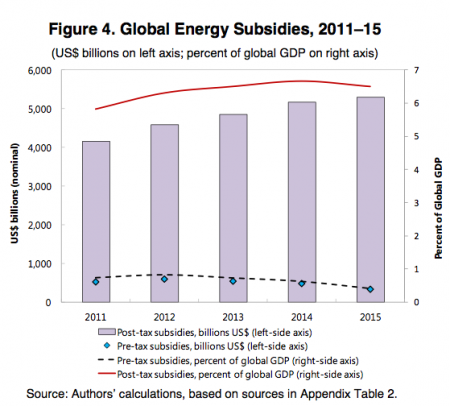 But according to eminent U.K. economist, Nicholas Stern, even this “vast” figure amounts to a significant underestimate.

In a statement on Monday, he said:

'A more complete estimate of the costs due to climate change would show the implicit subsidies for fossil fuels are much bigger even than this report suggests.'

Unsurprisingly, coal is named by the report as the biggest recipient of the subsidisation,

'given its high environmental damage and because (unlike for road fuels) no country imposes meaningful excises on its consumption.' 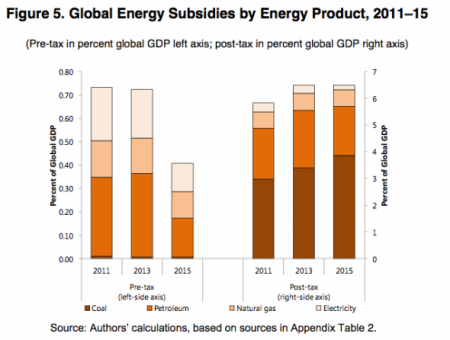 Petroleum is the next most heavily subsidised product, the report notes, with the projected subsidy remaining at 1.8 per cent of global GDP in 2015 despite declining petroleum prices.

This is followed by natural gas, and then by electricity, for which the projected post-tax subsidy comes to 0.2 per cent of global GDP in 2015, with environmental impacts attributed to energy inputs rather than power generation itself.

The report also finds that post-tax subsidies are large and pervasive in both advanced and developing economies, but are

'especially large (about 13-18 per cent) relative to GDP in emerging and developing countries.'

'There is no justification for these enormous subsidies for fossil fuels, which distort markets and damages economies, particularly in poorer countries,'

IMF estimates $US5.3trn/year #fossilfuel subsidies, more than the health spending of all the world's governments http://t.co/6xZH9o6lDi

In Australia, a report published in December estimated that the nation’s fossil fuel sector was set to receive $47 billion in federal government subsidies over the next four years.

In a statement to the Senate inquiry into wind turbines on Tuesday, Director of research at The Australia Institute, Rod Campbell, stressed that every dollar from treasury to the fossil fuel industry was one not being spent on schools, hospitals or public infrastructure. Campbell said:

“We know that over a six-year period, state governments in Australia spent $17.6 billion supporting the mineral and fossil fuel industries. Enough to fully fund the Gonski education reforms,”

“The old, false story of ‘cheap’ fossil fuels is bunk. In addition to the health and climate costs that are never accounted for, they’re very directly costing taxpayers billions."

The good news – there is some – is that 'the fiscal, environmental, and welfare impacts of energy subsidy reform are potentially enormous,' says the report. 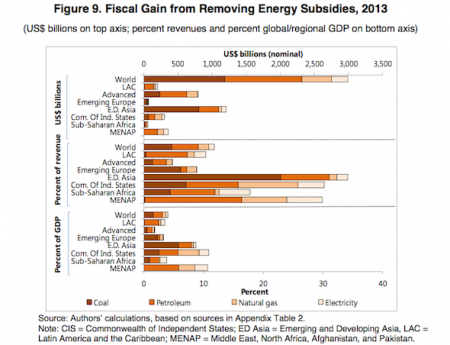 The IMF estimates that eliminating subsidies for fossil fuels would cut global carbon emissions by 20 per cent; slash the number of premature deaths from outdoor air pollution by 55 per cent (about 1.6 million lives a year) and deliver projected economic gains of around $2.9 trillion in 2015 — an amount that could be an economic 'game-changer' for many countries, the report says. 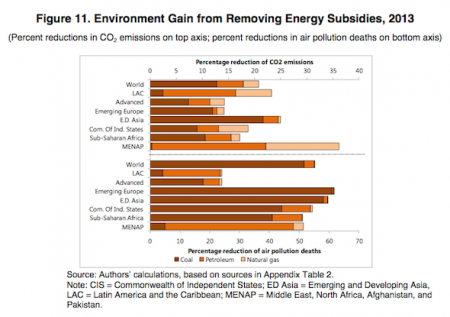 'What really matters for policy – not only for its own sake, but also for convincing policymakers and stakeholders of the need for reform – are the benefits that reform will produce in terms of fiscal balances, the environment, human health, and the economy,'

Another consequence, as the Guardian has noted here, would be that the need for subsidies for renewable energy – a relatively tiny $120 billion a year – would also disappear, if fossil fuel prices reflected the true cost of their impacts.

“If we get the pricing of fossil fuels right, the argument for subsidies for renewable energy will disappear,”

said David Coady, the IMF official in charge of the report.

“Renewable energy would all of a sudden become a much more attractive option.”

This article appeared in RenewEconomy on 19 May 2015 and has been republished with permission.

Governments spend $5.3 trillion/year subsidising #fossilfuels RT if you think this is a joke http://t.co/Out9Z8cXS1 pic.twitter.com/TqM7QI5Zlh