Prime Minister Scott Morrison is once again on the warpath against religious discrimination, quoting from the Bible in Parliament while introducing new religious freedom laws.

But Morrison's integrity as a Christian has been rightly questioned for years, including in this article from 2019 by Richard Tuffin.

UNLESS YOU'VE BEEN living under a rock for the last two years, you’d be well aware of how our Prime Minister, Scott Morrison, professes to a Christian faith. Most have seen the words from his maiden Parliamentary speech where he refers to deriving the values of “loving kindness, justice and righteousness” and have probably seen video footage and still images of him at various Pentecostal Church events — hand raised in the air, praising God and preaching.

Articles have been written about it. Competent journalists, along with the folk at Sky News After Dark, have talked about it and I highly suspect we’ll all hear a fair bit more about ScoMo’s faith while he remains Prime Minister.

In theory, this should all be fine and as a professed Christian myself, I’d be more than willing to speak of my faith to the Australian public if I ever found myself in a position of power such as his. I would just hope I wouldn’t perform whatever role I was in without this amount of hypocrisy. 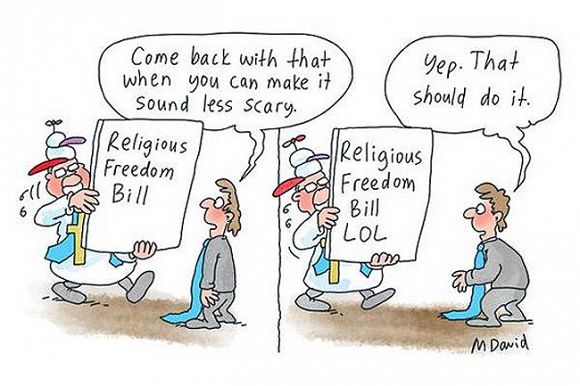 The Morrison Government could use the proposed Religious Freedom Bill as a political weapon against Labor in the upcoming election.

I’m thankful for my faith and I try not to be a hypocrite. I’d be a fool to pretend I’m perfect in that regard and I will never be the first to “cast a stone” if it pertains to me being a person without sin.

I’m sure the Prime Minister also admits he’s not the perfect Christian, but I really struggle with Scott Morrison proclaiming his faith so loudly and so publicly without acknowledging the absolute and blatant hypocrisy that goes along with the way he leads his life and the manner in which he performs his role as Prime Minister.

This relates to his own stated attitudes to a range of issues such as raising the rate of NewStart and other forms of Government welfare to the proper funding of our public health services and even to his responses to climate change. But it especially relates to his words and actions in respect of the Australian Government’s treatment of asylum seekers and refugees.

There’s also the fact that he lies – often and wilfully – and last time I checked, honesty was a big part of the Christian mantra.

While he’s no Donald Trump, whose lies have been calculated in the thousands since becoming President, Scott Morrison seems more than happy to not only tiptoe around the truth on a whole range of issues, but to also tell outright lies with rather frightening regularity.

The most recent example that comes to mind is the lies he echoed about the potential impacts of the Medevac legislation that is currently law but is threatened with being repealed if the Government has its way.

The first lie Morrison and the Home Affairs Minister (don’t speak his name) told us was that the Government would be “forced” to let asylum seekers into the country, no matter what. That statement has been proven to be utterly false and the relevant Minister has himself already rejected a number of Medevac-related claims since the legislation became law.

There would be countless other examples I could dig up of ScoMo’s porkies, but let's get back to his Christian hypocrisy and to what was possibly Scott Morrison’s most hypocritical act in this regard throughout his entire Parliamentary career.

In December 2010, a horrendous boat accident occurred off the coast of Christmas Island killing 48 men, women and children. Everyone of sound mind was horrified and deeply saddened at what had happened.

At the time, Scott Morrison was Opposition spokesman for Immigration and he was interviewed not long after the accident. During that interview, Mr Morrison complained about taxpayers money being spent to fly people who had survived the crash to the funerals of family members who had died in the accident.

Yes, folks, this great “man of faith” was furious about the fact that men, women and, most tragically, children who had survived the horror of the Christmas Island tragedy, but had lost family in the incident, would be funded to fly to funerals of their sons and daughters, their brothers and sisters.

Their mums and dads.

The thing that really sickened me about Morrison’s response on this occasion was not just the actual words he spoke, but the excited, breathless manner with which Morrison voiced his objections to what could only be seen as a completely humane and “Christian” response given these circumstances.

How could a response like this come from a man who so deeply values “loving kindness, justice and righteousness”, supposedly derived from a Christian faith?

It simply doesn’t add up. It never will. 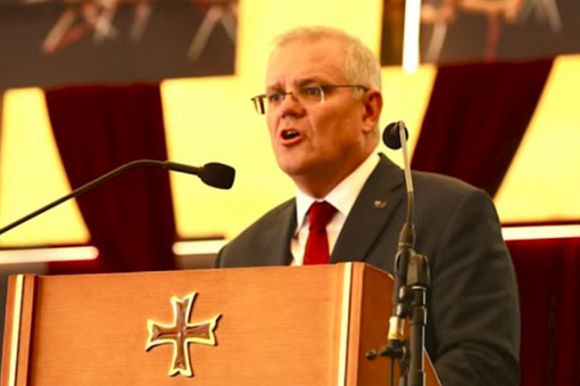 Legal cases both here and overseas highlight reasons why our theocratic Government needs to make a clear separation between church and state.

Very recently we’ve seen the likes of Labor Senator Kristina Keneally – who also proclaims a Christian faith – appeal to the Prime Minister’s own faith in terms of stopping the deportation of the young Sri Lankan family from Biloela we’ve all heard about so much lately. It’s right that she has done so and Senator Keneally has followed up these words with actions, by attending protests aimed at stopping these deportations.

Similarly, I’ve seen many Christian leaders call out Scott Morrison’s actions and policies from a purely Christian perspective, decrying the inhumane nature of such policies and pleading with the Prime Minister to act in a way more reflective of a true Christian faith. Sadly, those voices have fallen on deaf ears.

Surely, Mr Morrison is aware of the passage in Leviticus 19 that reads:

‘When a foreigner resides among you in your land, do not mistreat them. The foreigner residing among you must be treated as your native-born. Love them as yourself, for you were foreigners in Egypt. I am the Lord your God.’

And again, the very words of Jesus to ‘suffer the little children’ as he commands his disciples to encourage, not discourage, nearby children from wanting to come and meet him. Why then has Scott Morrison not responded like this if he is a believer of God’s word and in fear of God’s wrath lest he strays from a true Christian path? I just can’t reconcile any of that.

I can only hope that there’s one more voice that Scott Morrison will hear and might possibly respond to.

Like Mr Morrison, I also believe in miracles. And so, I hope and pray that the Lord will speak loudly and clearly to ScoMo in a manner not unlike the way in which Jesus spoke to Paul on the road to Damascus.

Maybe then the scales will fall from the Prime Minister’s eyes and he will see a way to act lovingly, kindly and humanely towards this family, towards these little children and they will be allowed to remain in a small Australian town where they are loved and cherished.

26 November 2021, 3:00pm Scott Morrison is once again on the warpath against religious discrimination ...

11 September 2019, 4:30pm From a Christian perspective, Scott Morrison has been displaying great hypocrisy ...

Prepare: Bill Shorten for our next PM

12 November 2018, 11:00am It's looking increasingly likely that Bill Shorten will become Australia's next PM. ...
Join the conversation
comments powered by Disqus
News updates