After a defeat in the 2019 Election, Labor is promising to repair the damage done by the Morrison Government, especially with the climate crisis.

But climate policy isn't a new initiative from the Opposition, as discussed in this article from 2019 by Michelle Pini and David Donovan.

WELL, progressives got it wrong. Most, anyway. Many of them are now in deep despair. Not sure what country they are living in; looking at their neighbours with suspicion.

Commentators got it wrong. Most of them, too. That included us. We thought Labor would win easily.

The polls got it wrong. All of them. Newspoll had Labor winning 58 polls in a row — every poll since the last election.

Even senior Liberal ministers got it wrong. Most of them, anyway. Many Liberals deserted what they believed to be a sinking ship, led by a dictatorial religious zealot and their third leader in six years. After all, the last time there were three changes of leadership, it did not end well for the Labor Government.

The only person, it seems, who got it right, was Scott Morrison — now no longer an interim Prime Minister. The unassailable captain of our ship, for the next three years.

Scott Morrison has said, ‘I’ve always believed in miracles’ as he led the Coalition to victory #auspol pic.twitter.com/jhy4LM0mDd

Here at IA, the mood is sombre. It is not only that we got it wrong, it is that we now have to endure another three years of the same callous, vacuous, backwards-thinking administration. The same agenda — devoid of vision, compassion and ideas.

We thought the power of the Murdoch media and big money to dictate elections was over. We were wrong. With the concentration of media ownership since Turnbull’s legislative changes, Murdoch is more powerful than ever. (Which makes supporting beacons of truth like Independent Australia more important than ever.) 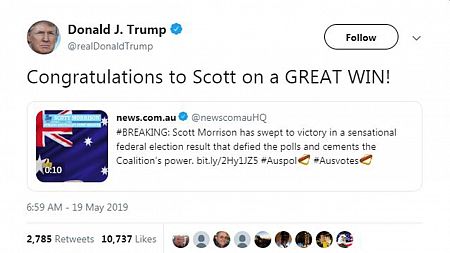 ...says a lot about where we are heading.

Some blame Clive Palmer, who, although didn’t manage a single seat in either house, succeeded in helping to destabilise the whole democratic process — Trump-like in style. His massive ad campaign and assault on our senses through every possible medium succeeded in helping propel the Coalition’s already aggressive “Kill Bill” strategy.

When trying to make sense of what went wrong, the seat of Warringah is perhaps the most instructive.

While Tony Abbott lost this blue-ribbon seat – a safe conservative seat since its inception in 1922 – he lost it to Zali Steggall, a conservative Independent candidate, whose comments on ABC 24 yesterday immediately after winning the seat, are particularly telling.

Steggall said she wanted to see an end to the “climate wars”. She described climate change as being an “issue at the front of people’s minds” and that everywhere she went “children are concerned about climate change”.

Steggall mentioned that other countries, such as Britain, which has declared a climate emergency, are leading the way and acting with urgency and so should we.

But Steggall also said that Morrison, unlike Abbott, “recognised” climate change and was “committed to the Paris Agreement”. In her assessment, Morrison had run a strong and great campaign and “people rejected the Labor Party’s economic policy”, before ending by stating her desire to work with him and “get on with the job”.

If the result of this election is anything to go by, Australians “believe” in climate change; we want to be seen on the world stage as leaders. We want to meet our Paris Agreement commitments and maybe recycle stuff. But we also want to drive our SUVs, keep our air conditioners on full bore and build our wealth through negative gearing and franking credits. The fact that most of us will never have franking credits or even understand them doesn’t change the fact that we don’t want any lefty socialist taking them away from us, by golly.

Tony Abbott made us look like climate deniers on the world stage, so he was punished. Or perhaps he was punished just because the deep-pocketed citizens of Manly thought he made them look bad.

Bill Shorten threatened our hip pocket – or at least the one we aspire to have – so he was punished, too. And maybe he was punished because the Australian people never much warmed to him. He has resigned as Leader, though he says he will keep going until the ALP chooses a new leader. Maybe it will be one a little more inspirational than Bill Shorten.

The Coalition ran a cynical, deceptive and negative campaign. They labelled every one of Shorten’s initiatives a new tax. The catchphrase “The Bill you cannot afford” was powerful and effective. It may have been the last thing many voters thought of before they entered the polling booth. Labor can’t really complain. The template was Paul Keating’s anti-GST message before the 1993 Election — the unlosable election that John Hewson lost.

Keating lost the subsequent election in a landslide. Which heralded a decade of Howard conservative rule — a divisive decade from which Australia has, clearly, still not recovered.

A government can win one election too many. Three years of Scott Morrison at the helm might just be enough to keep the liars and the cheats out of power for a decade.

We can only be optimistic. It is all we can do right now. The alternative is unthinkable.