In the lead up to the Federal Budget on 3 May, The Conversation asked five experts to dispel some of the most common myths associated with government budgets.

The Federal budget is nothing like a household budget. Not even a little bit. The key difference between government finance and household finances is that households have a finite life span, but the government does not (even when there is a change of leader or political party in power).

As individuals we typically take on debt early in our lives to invest in a home and education, and pay it back later in life in order to (ideally) pass on something to our children. Governments, by contrast don’t have this kind of end point where everything is brought to account.

Now, that doesn’t mean governments can rack up unlimited amounts of debt – far from it – but they can live with positive amounts of debt indefinitely. The calculus is really about making investments that return more than the interest cost on debt.

To be clear, governments should not fund recurrent expenditure with debt except in times of crisis (like 2007-8). But the idea that governments should aspire, as households often do, to have zero debt is deeply flawed and runs counter to how the most prosperous economies have done things for centuries. 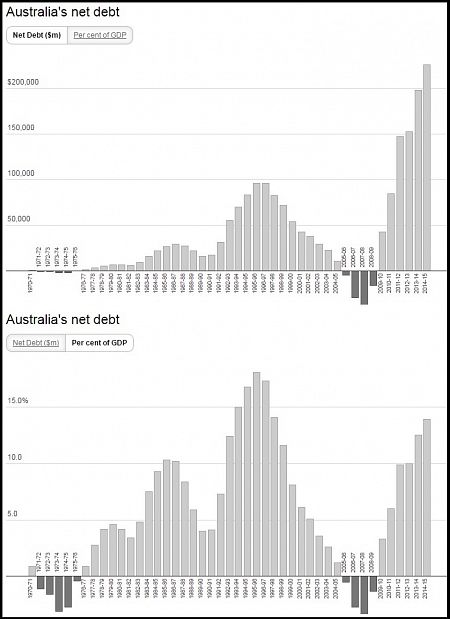 2. Any increase in tax will harm the economy

While Prime Minister Malcolm Turnbull and Treasurer Scott Morrison may have differing views on tax policy, on one aspect they seem to be in strong agreement: there should be no increase in taxes as a share of GDP. The Labor Opposition, although less explicit, has carefully crafted its policy proposals so as to be revenue-neutral.

This constraint on tax policy has gone largely unchallenged and that may be because of a widespread perception that Australia is “a high-taxing, big government country”, according to the 2015 Per Capita Tax Survey.

The reality, however, is that in comparison with other prosperous developed countries, Australia is a country of low taxes and small government. Among the world’s 18 most prosperous developed countries (OECD countries with per capita GDP greater than U.S.$35,000), our taxes at 34% of GDP (24% Commonwealth, 10% state and local) compare with an average of 44% for that group of countries. Over recent years, only the USA and Switzerland have had lower taxes than Australia (32% and 33% respectively).

As for the idea that high taxes impede economic growth, evidence from these countries does not support the proposition. The graph below shows that for the seven years 2007-2013 (the range of comparable OECD data), average taxes and economic growth. There is no evidence of any negative relationship. In fact, if anything, there is a small positive correlation, suggesting that perhaps high taxes and high economic growth go together, but it would be cheeky to draw such a conclusion, as the coefficient of correlation is very low. Our book Governomics: Can we afford small government? (Ian McAuley and Miriam Lyons) suggests what counts in economic performance is not the size of government, but, rather, its quality — the capacity of public agencies to operate with efficiency and responsiveness where markets fail.

3. Australia’s government is too big — smaller government could help fix the budget

Many believe that Australia has relatively large government and that the key to budget repair is smaller government that will lead to faster economic growth and a stabilised budget. Data for countries marked with an asterisk are for 2013; Turkey data is for 2012. (Source: OECD/Grattan Institute)

4. Every treasurer works closely with Treasury

Budgets are comprehensive and complex beasts that defy close management by any member of the political executive; teamwork across the core executive rather than inspirational involvement from a motivated treasurer are the essence of a good budget process.

But many Australians and most of the Canberra Press Gallery believe that when a government is labouring away preparing their annual budget, the treasurer of the day is ensconced in the Treasury, feverishly casting an eye over reams and reams of data and figures.

Treasurers and finance ministers are responsible for different parts of the budget. Treasurers look after the broader economic strategy and authorise the detailed economic data contained in the important Budget Paper No 1. They set spending limits for both the Federal government and inter-governmental transfers (Budget Paper no 3) and then focus on the revenue side, considering whether to increase any taxes or offer tax cuts to sweeten the budget. Treasury decides whether the budget will be contractionary or expansionary in nature.

In reality, some treasurers and finance ministers don’t spend much time with their own departments in the immediate lead-up months to the budget. Kim Beazley and John Fahey spent almost no time with their staff when they were finance ministers, relying instead on their advisers to do the leg work. Nick Minchin, Lindsay Tanner and Penny Wong were more active finance ministers. John Howard, Paul Keating, and Peter Costello spent considerable time with Treasury officials, often setting up their ministerial office in the department in the immediate days before the budget was presented to Parliament. They demanded a close relationship with their senior officials to craft the final budget speech, often rehearsing it in the Treasury department of their parliamentary office.

#Budget2016 will be a soft pre-election budget#Budget2014&15 is still on the table, if given 3 more years#auspol pic.twitter.com/C4iC0N4Cta

For households and firms, any excess of spending over income must be financed by borrowing and accumulating debt. Governments, however, have an option not available to the rest of us and that is “printing money” (in practice this means a data entry in bank accounts rather than actual printing of bank notes).

The basic principle is that the central bank, in our case the Reserve Bank of Australia (RBA), can provide money to the government without the government having to pay interest or repay the debt. The central bank can create debt-free money out of nothing! No wonder printing money looks an attractive option.

The policy has generally fallen out of fashion among economists but has recently experienced a revival among central banks in the USA, Europe and Japan, through its closely related cousin, Quantitative Easing (QE), as governments attempted to revive flagging economies after the Global Financial Crisis. The two differ mainly in the way monetary expansion is financed. (There is not space here to explain further, but there is a relatively clear explanation here).

Proponents of QE try to distance themselves from the criticisms of printing money by proposing that QE has a different purpose. Under QE a central bank creates new money and uses it to purchase assets from other banks. The money the banks receive for the assets makes it easier for firms and households to obtain loans, interest rates fall and consumers and businesses will borrow and spend, boosting expenditure on goods services and investment, which increases employment and GDP. Unfortunately, falls in real interest rates to zero or negative have been singularly unsuccessful in reviving economies, particularly Japan. With the apparent ineffectiveness of QE there is talk of resorting to the money printing option.

Most textbooks point to the role of monetary expansion in fuelling inflation. Extreme examples are the hyperinflation experiences of Germany between the two World Wars and, more recently, of Zimbabwe. There is little doubt that if printing money is successful in reviving an economy, eventually there will be inflation. Most central banks, particularly the RBA, have set controlling inflation as their major goal of monetary policy.

Printing money also removes an important constraint on irresponsible government spending. Do we really want governments to be able to spend at will as they see fit? Money creation might seem like a “free lunch”, in that governments can increase spending without raising extra taxes, but eventually spending must be paid for by households and firms, meaning less productive activity, employment and growth.

Want to get the real facts on election issues? Subscribe to IA for just $5.